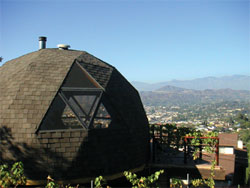 One summer night in 1947 the science fiction writer Ray Bradbury and a friend decided to take an after-dinner walk down Wilshire Boulevard. Even then, just two years after the end of World War II, Los Angeles was in the expansionist thrall of the automobile. The idea of two men strolling, not driving, down the Miracle Mile was already seen as somehow deviant, anti-social, potentially criminal. Within minutes a police patrol car came up alongside the two suspects, who were questioned at length just for attempting the Old World social activity of flâneurie. In LA, a place that thinks itself a city but is just a centreless agglomeration of low-density hubs that could not communicate were it not for the freeways and boulevards that link them, it has become a cliché that no one walks, that people are separated by distance, by the cocoons of their cars, by their insular lifestyle. It has become the guiding myth of its own self-image of modern alienation. It creeps into films such as Robert Altman’s Short Cuts (1993) or Crash (2004), whose opening voice-over monologue confides that ‘In LA, nobody touches you. We’re always behind this metal and glass. I think we miss that touch so much, that we crash into each other, just so we can feel something’.1

It is a seductive cliché fed by a narcissistic film industry, one with traction based in social and topographic reality. But there are other ways to create that sense of touch and break through that somnambulistic drift of dislocation and alienation. Fritz Haeg, a Minnesota-born architect who teaches at Art Center College of Design in Pasadena, has been experimenting for the last five years with ways of bringing people together, introducing communities that rarely mix, practitioners from different cultural disciplines that seldom overlap or mingle. Haeg lives in a 1980s-era geodesic dome on the top of a hill overlooking Eagle Rock, an area where young artists priced out of gentrified Silver Lake have found more affordable digs and garage studio spaces. The dome on the hill sits with unlikely authority surrounded by ranch-style houses overlooking a megalopolis without end. It’s a personal dwelling, an architecture studio, a site for a terraced subsistence ‘gardenlab’ and, most significantly, a venue for an ongoing series of Sunday events that he calls Sundown Salon. His remodelled Buckyball, which caps a Dr No-like sprayed-concrete subterranean cave, is the perfect futuristic HQ for someone like Haeg, who will admit to a certain self-conscious Utopian strain in his practice and his ideals (recordings by Terry Riley, Steve Reich and other Minimalists seem to be on the stereo a lot). During a recent visit to his hilltop eyrie Haeg stressed that he is most interested in encouraging the idea that a house can be more than what we expect of it, that a home can be a bubble of privacy and at the same time a venue for communal activities that take on a life and history of their own. The Salons – there have been 26 since 2001 – have involved artists such as Pipilotti Rist, Los Super Elegantes, Assume Vivid Astro Focus, Yoshua Okon, Alice Könitz, Katie Grinnan and Liz Larner. But the Sunday soirées are polyglot, and collaborating participants come not only from the visual art world but have included dancers, architects, musicians, filmmakers, designers, DJs, feminist Agitprop performers, hairstylists, needleworkers, critics, poets, clothing designers, community activists, horticulturalists and on and on. Variously themed around things as diverse as the Futurist Baroque, reading, botany, Glam Metal, hot rods, radical gardening, collaborative collage-making, the body, knitting and boys (or, on another night, girls), the salons are part performance, part workshop, part seminar, intended to create a sense of convivial community among people who might otherwise never meet or consider one another’s professional interests as in any way relevant to their own. Some gatherings have been as demure as book readings (LA Literary, Salon no. 21); others have been frenzies of competitive needlecraft (KnitKnit, Salon no. 11, which brought together Andrea Zittel, Liz Collins, Jim Drain and a host of others willing to crochet their hearts out). Still another (LA Masterminding, Salon no. 12) assembled the heads of creative non-profits and community arts organizations to encourage collaborative experimentation and foster future dialogue. Others have clearly just been fun free-for-alls, as in a salon introducing Nordic artists, designers, DJs, performance artists and cooks to their LA counterparts (Scandinaviangelenos, Salon no. 25) in a pot-luck cultural exchange project.

In all this Haeg is following a tradition established by the Austrian-born architect Rudolf M. Schindler, who became the quintessential LA Modernist in the 1920s, forging the first local link between Modernism in domestic architecture (the open plan, the blurring of indoor and outdoor space, the congenial exterior fireplaces) and the European model of the avant-garde salon. Rudolf and Pauline Schindler’s Kings Road House in Hollywood (1922), now home to the MAK Center, became the locus for artists, musicians, dancers and writers – many of whom were transplants from the East or exiles from Europe – and their salons a vital forum for progressive and radical ideas where artists could become aware of one another and express their shared, emergent LA-ness in the 1920s and 1930s. (As early as 1916 Pauline dreamed of a house ‘open just as some people’s hearts are open, to friends of all classes and types […] where millionaires and labourers, professors and illiterates, the splendid and the ignoble meet constantly together’.2)

Haeg bristles at the suggestion that his own salons are merely excuses for parties. Shying away from overstretched fall-back frames such as ‘relational aesthetics’, he sees the events as happenings that can be laboratories of creativity and cross-pollination. Art that sits in a corner doesn’t interest him as much as the artistic residue produced through some social interaction, some mutually shared experience. He wants the ‘salonists’ to take something constructive home with them, but it’s up to them to discover what it is.

Haeg has multiple irons in the fire: aside from a nascent private architectural practice, he is also expanding his idea of demanding more from the average home via his Edible Estates project, coaxing enterprising volunteers in nine climatically distinct parts of the country to scalp their placid, sterile American lawns and replace them with productive, regionally appropriate gardens that are completely edible and sustainable. (One already exists in an otherwise trim neighbourhood in Salina, Kansas.) It may be nearly impossible to wean suburbanites from the glories of the over-fertilized, hyper-manicured artifice that is the front lawn, but Haeg isn’t alone in this green insurrection, and if social critics like James Howard Kunstler and the makers of the documentary The End of Suburbia: Oil Depletion and the Collapse of the American Dream (2004) are correct in their predictions about the impending implosion of sprawl as a workable model for living, experiments such as Edible Estates may be just the beginning of an infrastructure of agrarian subsistence that will become the norm.

But doom is still down the road, and Haeg, who is compiling a thick book about the salons as a definitive record, diary and instructional handbook (with Rashomon-like recollections by various participants about what actually did or did not take place), recently thought out loud that he might bring the salons to a close in 2006. In fact, expressing a need to leave LA for a while and travel, he mused about holding local Sundowns in cities around the world, taking the salon back to its origins and inviting the locals to bring something new to the idea. That way, like the proverbial one-suitcase man, or a tortoise, you can always take your home with you anywhere you go and still make new friends.

1 From Crash (2004), screenplay by Paul Haggis
2 Pauline Schindler (née Gibling) in a letter to her mother, May 1916, quoted by Justin Beal in a forthcoming essay, ‘Last Stop West’