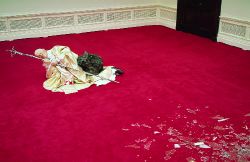 'Apocalypse: Beauty and Horror in Contemporary Art' was a misbegotten exhibition created by an institution still tripping on the impact of its till-ringing 'Sensation' in 1997. I half-expected to find David Foster Wallace-style footnotes tagged to absolutes such as 'beauty' and 'horror', but the bathos here was pretty much intact, unsalvaged and unenjoyable. In the recent Woody Allen film Small Time Crooks (2000) the wife of a hapless but newly successful bank robber hires Hugh Grant to polish her social skills. To improve her vocabulary she starts reading the dictionary, beginning with A. 'I found the evening apocalyptic', she observes to him later, 'yes, in fact I was agog.' Surprising, then, to find the same puppyish desperation for approval at the Royal Academy

The show was curated by Exhibitions Secretary Norman Rosenthal and Max Wigram. Even with the relatively small number of 13 artists, each of whom had their own room, it was clear that the Academy opted to chew much more than it could bite off. By comparison, the 1992 Los Angeles MoCA exhibition 'Helter Skelter' managed really to explore the consummate area of darkness around the apocalyptic myths of loss in that city. Here the strain of juggling Norman Rosenthal's nutty plan to synthesize the biblical revelation of St John The Divine with artists' 'contemporary interest in the abyss' and achieve a 'mood of catharsis' was killing.

The Chapman Brothers' project Hell (2000) was, according to Rosenthal, the work around which 'Apocalypse' was
based. Incorporating nine glass vitrines arranged in the shape of a swastika, the work includes more than 5,000 miniature figures in a variety of landscapes. Part Goya, part Breugel, part Auschwitz, Hell eroticizes the industrialization of genocide and experimentation: a volcano spits out Nazis and body parts, mutants get blow jobs from Nazi stormtroopers, multi-headed executioners hang bodies from a Bridge on the River Kwai-style structure, and skeletons are reanimated in a neo-Classical temple. When nine colour photographs by Prada fashion photo-grapher Norbert Schöner, What the Hell I-XI (2000), went on display at the Kunst-Werke in Berlin they were at least part of a debate. In London, surrounded with the end of season offers from a choice selection of galleries, the sheer overblown laboriousness of Hell, and the circulation of Airfix aficionados milling round it, escaped any real critical consideration. The mushy wall text was not untypical of others throughout the show: 'The Chapman Brothers are tired of their work being seen as one-dimensional', while adding helplessly 'a large part of our understanding of their work is about our reaction to it'. It was a statement that left the in-house PR team conflicted about this Toys'R'Us gore-fest. Some said openly that they hoped the work would shock the public, while others denied that there were any plans to be provocative.

Of the 250,000 anticipated punters expected to visit 'Apocalypse' most did so through Gregor Schneider's Cellar (1985-99), a transplant from the artist's project gradually to reconfigure his house in Rheydt from the inside out, with unsettling fake walls and spaces. Part Blair Witch, part Mike Nelson, the roughly plastered, dripping cellar turned out to be a conduit to a fairground of one-liners. It led to a partial and hollowed-out selection of Luc Tuymans' paintings; Mariko Mori's inexplicable Dream Temple (1999), a megalomaniac temple of glass erected on a bed of sea salt; and Maurizio Cattelan's life-size waxwork of Pope John Paul II struck by a meteorite La Nona Ora (The Ninth Hour, 1999), which was the exhibition's PR image of choice.

'Apocalypse' also certainly didn't do any favours to Mike Kelley's Extracurricular Activity Projective Reconstruction #1 ( A Domestic Scene) (2000), which is the third part of a 365-piece work in progress. For this piece Kelly took a found black and white photograph of a high school play, reconstructed the set and brilliantly rescripted the dialogue. A monitor showing the 25-minute-long act, shot in early American black and white TV style, sits alongside the hokey and very sculptural stage set. The action takes place in a rank and curdled bachelor apartment where a Sylvia Plath-haunted suicide plot between two self-loathing and prissy lovers develops around the gaping, expectant oven. The work fits into Kelley's ongoing interest in re-aesthetizing youthful experiences, but this one is cast as poetic, gag-filled and horrifying. It is also a severe and super-formal response to the insistent readings of his work in terms of trauma and nostalgia. The invention of this complex, mocking pseudo-biography completely depth-charges any simplistic reading of the work.