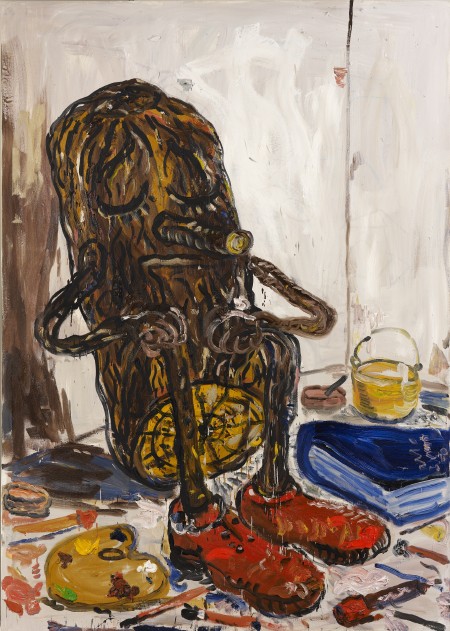 Carlo Collodi’s acidly anti-mythological story Pinocchio (1883) opens with an absurd upending of fairy-tale convention: ‘There was once upon a time a piece of wood.’ A fairy tale’s opening gambit traditionally introduces a cipher of some kind – a good-hearted king, a penurious watchmaker – for the purposes of a moral parable. By contrast, Pinocchio is a loquacious lump of pine who is not merely cheeky, but also frequently spiteful, lustful and thieving. Through wily self-interest he survives starvation, the attentions of a murderous cat and fox, as well as a sojourn in the maw of a giant shark. In Walt Disney’s 1940 version, Jiminy Cricket counsels Pinocchio, ‘always let your conscience be your guide’; in the book, Pinocchio, in fit of rage, brains the moralizing insect with a wooden mallet – splat! – against a wall.

Armen Eloyan’s latest paintings feature a host of demonic Pinocchio-like figures. Untitled (Painter II) (all works 2009) shows a log figure brandishing a paintbrush, a motif familiar from Philip Guston’s late works (such as The Studio, 1969). He’s missing an arm and a wedge-shaped hole has been lobotomized from the back of the head, but he doesn’t seem to mind too much. Passively or masochistically accepting their own destruction, nullity or solitude, these are cartoon characters in existential meltdown. The book–men in Trumpet and Sleeping are rendered in the style of SpongeBob SquarePants, with bodies delineated by a friendly-looking rectangular outline; but the sepulchral colours here suggest a darker narrative of death and decay. Insane cheerfulness grips the goofball face emerging from the painterly wood grain surface of Untitled (Slice). More disturbing is Untitled (Potato), a rabid potato–man with lolling tongue, gleefully dismembering his own right hand with a kitchen knife.

For all the homicidal vim of these works, this is a more subdued exhibition than Eloyan’s previous London shows (at Timothy Taylor last year, and Parasol Unit in 2007). Back then, the Armenian artist’s recurring Mickey Mouse figures came across as rather-too-easy negations of the Disney aesthetic, whose obvious corollary is American cultural, economic and political hegemony (a terrain that has been already well-mined by the likes of Paul McCarthy and Mike Kelley). This time, Eloyan delivers a more subtle pitch: rather than a wholesale reversal of Americana, he fuses elements of the complex history of the wooden puppet with its global appeal, print and screen life. Collodi’s Pinocchio was a comedic subversion of the fairy tale, which, like Giovanni Boccaccio’s The Decameron (1353) or Voltaire’s Candide (1759), sidelines pathos in favour of allegory. The Disney movie reversed this, turning it into a full-blown fairy tale. Eloyan adds something new. Where earlier versions of the character were garrulous, if these figures could speak, they’d talk gibberish. Where others were social, these are loners, comic-book Rembrandts on canvas archipelagos. Where previous Pinocchios instantiated specific characters, these are little more than rough facsimiles with long wooden noses.

They are also, somewhat perversely, quite cute. This is especially evident in a series of smaller works: a tomato with chef’s hat, Untitled (Tomato as Cook), and a vase with kissable lipstick mouth, Untitled (Lady). Clearly, Eloyan is a fan of cartoons, both old and new. Deep within these images is the ghost of George Herriman, the author of the Krazy Kat cartoon strip that ran in America between 1913 and 1944. Eloyan has transformed the charming sketchiness of Krazy Kat into something that is freeform, dangerous and pulsing. Paint seems to have been squeezed directly onto canvases unmixed, and harnessed into lines with juvenile impulsiveness. All this flagrancy of taste suggests that Eloyan equates this ‘badness’ with a sort of transgressive agency. That, indeed, was the suggestion of Collodi’s original Pinocchio: life is bad, and sometimes one has to be immoral in order to get by. Eloyan’s paintings are less certain. His characters appear psychologically damaged, like trauma victims, husked by the outside world. Maybe, given his adventures, this is what Pinocchio should have looked like. In the end, they suggest, you can never really be your own puppet.