Could Auckland be the centre of the new ‘Trans-Pacific’ network? 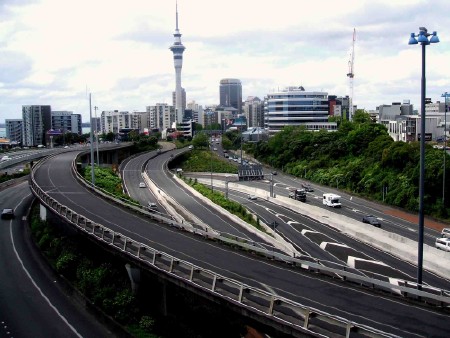 Certain images come to mind when thinking about New Zealand: it’s clean, green, looks exactly like the landscapes in that film trilogy, everyone sounds just like those guys on HBO and most people live a holiday-park lifestyle. Well forget it all. Conservation group WWF recently released a study indicating that New Zealand has the sixth largest ecological footprint in the world, behind the United States, Kuwait, Denmark, Australia and the United Arab Emirates; ‘100% pure’ is nothing more than a tourist-board campaign.

To oust another stereotype, New Zealand’s contemporary art scene also deserves attention. A walk down the Ponsonby end of Karangahape Road in Auckland this week offers exhibitions from an unlikely range of artists: Copenhagen-based artist collective Superflex (showing at Artspace); Michael Stevenson, Francis Alÿs and Amit Charan (at Gambia Castle); Peter Madden (at Michael Lett); and Andrew Barber (at Stark White). Despite the isolation of this small country, New Zealand maintains and nurtures a disproportionate amount of very good, engaging and well-informed artists. Perhaps all those hours spent on long haul flights and other modes of transport is being put to good use; or, as renowned Kiwi physicist Ernest Rutherford once put it, ‘We don’t have the money, so we have to think.’

Despite the current flurry of great exhibitions on K-Road, Californian curator Brian Butler, on the eve of his departure from a three-year directorial tenure at the publicly funded Artspace, has suggested the New Zealand art world, and the region at large, would benefit from a change in outlook. A shift towards what he refers to as a ‘Trans-Pacific’ focus, rather than what is perhaps more typical of a Commonwealth nation: deference to contemporary art’s northern epicentres, or worse, a navel-gazing local scene. Butler is familiar with our Trans-Atlantic counterpart, having run Los Angeles gallery 1301PE for many years before taking the position at Artspace. (The latter gallery maintains a healthy rotating-door policy for its directorship that has attracted, in recent years, the talents of German curator Tobias Berger, now at the NJP center in South Korea, and Australian Rhana Devenport, now the director at the Govett Brewster Gallery in New Zealand – home to the Len Lye collection.)

The notion of a Trans-Atlantic art world is arguably based on the notion that the best – and, to a certain extent, most collectable – art is to be found in the self-sufficient network of centres bordering the Atlantic. During the 1990s, for example, when post-colonial discourse was at its height, the Asia-Pacific rim was something of a fairground for biennial curators, but the attention was relatively short-lived. More recently, auction-house successes tend to propagate stereotypes about regional contemporary art scenes, epitomized by artists like Takeshi Murakami, Yue Minjin and the work of the late Clifford Possum Tjapaltjarri from Australia.

However, with the once great economic powers of the 20th century rapidly revising free-market practices in an attempt to counter the finance industries’ widespread addiction to what FT journalist Gillian Tett calls ‘candy floss money’, times are changing. New alliances and networks are forming, and so Butler’s suggestion is not entirely unlikely. But neither is it a new phenomenon in the region’s art world. Many publicly funded institutions and galleries have been working together across the region for some time – the Asia Pacific Triennial in Brisbane is the most obvious example. But there is a synthesis between Butler’s Trans-Pacific idea (which would likely focus attention on monetary outcomes as well as the esoteric benefits of collaborative experimental exchanges) and the wider economic community.

Following this year’s G8 gathering in Japan, it became apparent that the economic powerhouses of this decade are no longer the sitting members of G8. Attention has fallen on the BRICs: Brazil, Russia, India and China, but also Mexico, Australia, South Africa, Indonesia and South Korea. Whilst formally expanding the G8 is likely to reassure sitting members, Australian Prime Minister Kevin Rudd has been espousing his own version of the changing of the guard. He has suggested that the immediate future will reveal the world’s most powerful economies in Australia’s ‘back yard’: specifically Indonesia (which is, according to Newsweek, starting to resemble the flourishing Indian economy of the ’90s), but also China, India, Japan and South Korea. In a speech to the Sydney Asia Society in June, Rudd suggested initiating talks on an alliance between the Asia-Pacific region following the model of the EU, initially sitting alongside the current ties of APEC and ASEAN and eventually surpassing it. Such a strategy is ultimately about big business and trade, though it is tantilizing, however unlikely, to consider a shared regional currency, or an open-border policy for all member states, like that of the EU.

If the focus between the countries involved in the Australia’s new ‘very special friends’ network is trade, one has to wonder if there will be an effect on the art market. Whilst many working in the arts still baulk at the idea of a market-driven art world in the region, it is hard to ignore the wealthy professional- and middle-classes benefitting from the burgeoning economies of China, India and Australia (current stock market falls excluded for the moment) – though they are yet to have an obvious impact on the art world. In New Zealand, especially, contemporary art and those dedicated to creating it, discussing it, writing about it and supporting it are tellingly absent from mainstream media sources. The ‘art star’ phenomenon is a completely alien notion. While a local artist may garner media attention once they have been recognized abroad, it is rarely the reverse. Michael Lett, a gallerist in Auckland, who works with a wide range of artists, international and New Zealand-based, suggests that it is simply part of the environment. Lett spends much time trying to encourage his clients to find out more about the artists he shows in his space – many of whom produce work that provokes discourse abroad. There is still a tendency amongst the small group of collectors in New Zealand to stick with what is familiar and recognizable – that which harks back to, or parodies, the work of the grandfathers of New Zealand contemporary art: Colin McCahon and Gordon Walters. This sentiment was echoed by local artist Mladen Bizumic who is currently based in Berlin, during an interview with the New Zealand magazine The Listener. He suggested that whilst ‘Aotearoa is producing an incredible number of good artists […] we need to advance […] a critical discussion around art.’ This comment is not about creating more funding opportunities – New Zealand already has many (the former Prime Minister Helen Clark personally oversaw the arts portfolio). Rather it is a backhand aimed at local print editors, many of whom seem addicted to the Associated Press wire and are largely indifferent towards content focused on contemporary art and culture.

This situation is not for lack of events to comment on. Aside from those Auckland galleries already mentioned, New Zealand maintains a healthy network of publicly funded spaces: the Adam Art Gallery, the Govett Brewster, and Wellington City Gallery being among the most interesting. In the wider region the arrival of new art fairs in Hong Kong, Shcontemporary in Shanghai, and the continued presence of the Melbourne Art Fair offers plenty of art-entertainment. One would also hope that the plethora of biennials and triennials in the region – including, this year alone, the Yokohama triennial, Gwangju, Sydney, Shanghai and Singapore biennials and Guangzhou triennial – would aid the cause. But as the curators for Yokohama suggested in the curatorial statement: ‘Quite often the same pieces circulate and at a certain point there is no longer a necessity to go.’ So what then? Do we just buy the catalogue and leave the event to passing tourists?

Perhaps so. The New Zealand art community is adept at producing projects that fit into a A4 envelope or carry-on luggage. This miniature publishing community continues to produce exceptional work: the online art magazine Natural Selection, during its brief life, gained a committed international audience and was included in the Documenta Magazine in 2007. Artspace dedicates considerable energy to documenting the exhibition programme of the gallery in beautifully designed publications, ensuring that current New Zealand artists continue to have a presence internationally. When CNZ, the government arts funding agency, ceased its funding of a New Zealand Pavilion at the Venice Bienniale, Artspace enlisted the support of the country’s leading curators to produce a rich publication titled Speculation, which documents the work of a group of artists deemed worthy of exhibiting at the next bienniale. The message was heeded and CNZ will again support a New Zealand pavilion in 2009, featuring Francis Upritchard and Judy Millar.

Such a project seems to typify the current New Zealand art scene, one has the sense that many refuse to wait around hoping to be discovered and are taking matters into their own hands. The Auckland space Gambia Castle, for example, is making a concerted effort to develop a new audience- and collector-base locally as well as abroad. Run by a group of young(ish) artists (Dan Arps, Nick Austin, Andrew Barber, Fiona Connor, Simon Denny, Sarah Hopkinson, Daniel Malone, Tahi Moore, Kate Newby and Tao Wells), many of whom have already tripped around on the residency circuit or been central to an ‘experimental-artist-run’ venture before, Gambia Castle was opened as an alternative to the typical artist space. Whilst it is concerned with presenting critically engaging exhibitions it is clearly also a promotional platform for the artists involved, all of whom have solo shows annually. Sarah Hopkinson, the space’s administrator / writer / part-time curator suggests that Gambia Castle shares similarities with spaces she and the other artists involved discovered in Europe and the UK, not elsewhere in Australasia. The space is open only as long as they continue to sell work, they do not apply for government grants, and welcome the freedom that this affords. They have plans for future projects abroad and are wisely not waiting for the attention to come to them. Because, as appealing as Butler’s Trans-Pacific network or Rudd’s EU twin sounds, such endeavours are unlikely to manifest themselves soon. Jerry Saltz recently quoted New Museum curator Laura Hoptman, who proposed that with the current global turmoil: ‘Art will flower and triumph not as a hobby, an investment, or a career, but as what it is and was – a life.’ For the majority of the art scene the latter has always the been the case in New Zealand, where curiosity, inventiveness and DIY reign, so maybe without even intending it, Auckland is in an enviable position.