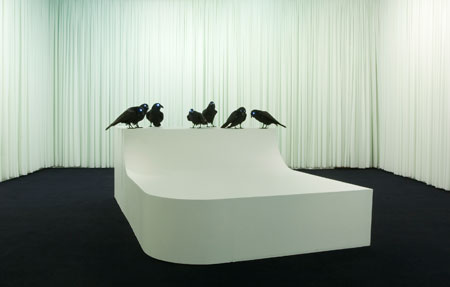 Børre Sæthre specializes in installations that try to pin down the key connections between desire, dreams and reality. His most recent show at Kunsthall Bergen, ‘From Someone Who Nearly Died but Survived’, also leans towards abstraction and participatory design. The first room of the exhibition is heavily padded and surgically white. Several steel orbs are scattered on the floor while the larger ‘mother orb’, which nearly fills the room and is connected to several black cables, emits sounds reminiscent of erotically aroused moaning. Thoroughly mechanized in an electronic ambient loop, however, the sounds have become detached from their human origin. On the walls abstract diagrams and figures are shown on small built-in monitors. The adjacent room is dark except for the projection of an apparently inexhaustible series of spectacular explosions. To the right, you pass through a narrow corridor covered in silencing foam rubber, ending up in a claustrophobic space where an immense glass cabinet covers the entire far wall. Inside it, a life-size Pegasus emerges out of a thick, slowly moving fog.

In this installation, Sæthre blends the retro, space-age aesthetics of Andrei Tarkovsky’s Solaris (1972) and Stanley Kubrick’s 2001: A Space Odyssey (1968) with high-end corporate branding, to create an environment with the distinctive air of an uptown Louis Vuitton emporium. But the exquisiteness in this show has, like all of Sæthre’s work, an unsettling undercurrent. We can’t confirm the meaning of the ambient sound from the orbs, the diagrams remain abstract, and the explosions are like an endless climax without resolution. There are no love stories or tales of seduction in ‘From Someone Who Nearly Died but Survived’. Desire is not filtered through human narratives, but translated into obscure riddles or abstraction.

By focusing on desire retold as science-fiction tableaux, theoretical constructs or fragments of myths, Sæthre taps into our need to translate raw lust into a symbolic language that conforms to socially acceptable mores. His earlier works, which often take gay issues as their starting-point, are more straightforward: for instance, in Double Fantasy (1996) silvery liquid on a pillow evokes the stickiness and corporeality of sex. But while in this work sexuality is openly translated into symbols, in ‘From Someone Who Nearly Died but Survived’ desire is not so much inscribed in the work itself, encouraging readings of the objects, as it is embedded in the choreography of the viewer’s experience. The exhibition becomes a construct for experiencing the translation of desire: a fierce, erotic throbbing constantly threatens to breach the installation’s slick design, in a clear evocation of the rhythms of copulation, while the viewer is located in a space that hovers between the freedom of childhood imaginings and the constraints of adult interpretive ciphers. The installation also encourages visitors to reconnect with formative experiences, such as reducing the daunting infinity of space by, for instance, creating a sanctuary from a piece of carpet between two chairs. Inventing different ways to deal with chaos or uncontrollable areas of existence is not something that not only characterizes childhood, Sæthre suggests, but that follows us through life in the form of fantasies or fictions.

‘From Someone Who Nearly Died but Survived’ gives a symbolic form to desire but pushes this symbolism to the point where the surface eventually cracks and the alienation underneath is exposed. The exhibition’s resistance to more coherent love stories, and its equally insistent abstract language, end up severing the ties to the viewer’s experience of desire. The symbolism, then, both connects with desire and fails to combine with it. Experiencing this act of Verfremdung makes us see fantasy at work with its pants down, so to speak.

Art, in the process of being translated into a commodity, is the most excessive sublimation of desire. But it also constitutes a space, as this installation makes clear, where that same act of translation can be successfully entangled. Sæthre’s latest installation is a stage on which the continual negotiation between chaos and control, beauty and ugliness, is brilliantly played out.