The histories of two legendary Milanese magazines, Domus and Abitare, are intertwined with the extraordinary generation of Italian designers who burst onto the scene 50 years ago

In 1961 the city of Milan was enjoying an extraordinary moment. As Achille Castiglioni pondered whether to give his Arco lamp a concrete or a marble base and Ettore Sottsass returned from a trip to India inspired to imbue his ceramic vases with a spiritual dimension, a host of freshly-hatched, family-owned companies – including Cappellini, De Padova and Flos – offered the means by which such designs could be produced and distributed to the world. In the same year a small trade association called Cosmit founded the Salone Internazionale del Mobile and Piera Peroni launched a monthly magazine titled Casa Novità (House Innovation) which, from issue six, was renamed Abitare (To Live). Meanwhile Giò Ponti was designing the Hotel Parco dei Principi in Sorrento and in parallel editing Domus, the monthly magazine he founded in 1928 and remained in charge of until his death in 1979, barring a break during, and immediately after, World War II.

Michelangelo Antonioni’s film La Notte (The Night), also dating from 1961, offers a vivid portrait of this period in the city’s life. Bustling to the point of chaotic, the streets are in equal measure destroyed by bombs and rebuilt with postwar wealth. Antonioni’s Milanese brim with cultural ambition, but are hobbled by bourgeois patterns of thought and behaviour. Typical of the director’s work, La Notte is awash with alienation, yet I defy anyone to watch it without wishing, at least in a small part, to dance the night away to a jazz band in the garden of a wealthy industrialist wearing a low-back, knee-length evening gown.

The current editor of Abitare, Stefano Boeri, and the incoming editor of Domus, Joseph Grima, both acknowledge that their respective magazines can never be entirely untangled from this era. Looking back, Grima credits the flourish of design activity to the proximity to a city with a ‘great knowledge base, artisanal skills and production techniques’, while Boeri emphasizes the role of ‘the businessmen, the people who were producing things’. Both acknowledge, however, that the most important legacy of the time is Milan’s generation of influential architect-designers. Among them include Castiglione (1918–2002), Sottsass (1917–2007) and Vico Magistretti (1920–2006); still alive are Enzo Mari (b.1932), Alessandro Mendini (b.1931), Andrea Branzi (b.1938) and Gaetano Pesce (b.1939). 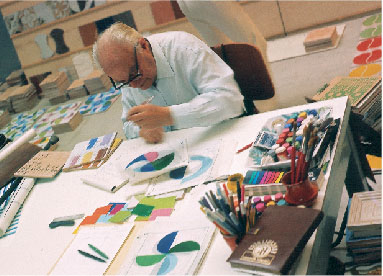 The influence of these men rests not only on past achievements but also on their continued involvement with design activity in the city. For the past 12 issues of the magazine until this month Mendini guest-edited Domus, a position he first held following Ponti’s death 30 years ago. From March last year until this February, the Design Museum of the Triennale di Milano held an exhibition curated by Mendini titled ‘Quali Cose Siamo’, or ‘The Things We Are’. This gloriously quirky selection of 800 items, ranging from a Gucci handbag to the rubble of the L’Aquila earthquake via some more conventional pieces of design, is late work at its best – fearless, expansive and idiosyncratic. Shunning the curse of youthful inhibition to an even greater extent is Mari, who, in 2008, amused an audience at a debate at London’s Serpentine Gallery by calling Rem Koolhaas ‘a pornographic window dresser’ and followed this up with the claim that the only aspects of modern life that pleased him were ‘bread and terrorism’.

While they are unarguably brilliant individuals, a significant factor behind the ongoing impact of Milan’s aged enfant terribles is the lack of domestic successors. The newer crop of similarly prominent designers consists of international figures such as Jasper Morrison, Hella Jongerius, Konstantin Grcic and Naoto Fukasawa. All of them are still drawn to Milan, but none were bred there. They come to work with the 50-something-year-old companies – as well as Cappellini, De Padova and Flos, of roughly the same vintage there are Moroso, Artemide, Danese and Driade – that still offer sympathetic if relatively small scale facilities. Although the craft skills that were so important in the postwar period are largely extinct and production is now exported to China, Brazil or India, the romance between international designers and North Italian businessmen is still alive.

Also bringing designers to Milan, at least annually, is the Salone Internazionale del Mobile – the international furniture fair. Getting bigger every year, it appears not to suffer at all from the city’s reduced role in nurturing design talent and supporting industrial and artisanal production. According to Boeri, the five-day fair is a ‘completely mediatic event’, its function being the production of ‘images and symbols’. If true, it might even be to its advantage that a half-century-old memory is more powerful than any living, competing force. Certainly Cosmit are dwelling on the past to the fullest extent in celebrating the Salone’s 50th anniversary. First on their list of events is a new play, written and directed by Laura Curino, titled Great Hands Without End – the Birth and Ascent of Design in Milan.

The Salone might profit from the triumph of image, but the magazines that were born in Milan of the same set of circumstances face a different reality. The combination of the recent financial crises and developments in communications technology has hit architecture and design publications hard. Among the most significant recent print casualties is the American monthly I.D., which folded in 2009 after 55 years of publication. Against this background, it seems miraculous that Milan can support not one but two magazines of equivalent heft and seriousness: Domus and Abitare. Both publications maintain strong ties with the generation of designers born in the first half the 20th century: put bluntly, are they able to outlive them?

Visiting the editors of these magazines offers two experiences that are distinctly Milanese, but very different. The offices of Domus are on a suburban road named Via Mazzocchi after the founding publisher whose family still owns the magazine. The publication is part of a group employing 300 people whose best-known title is the car magazine Quattoruote (the name that allows the taxi driver to locate the building). Meanwhile Boeri edits Abitare from his studio in the same block as his and his family’s homes in central Milan. Arriving for the first time the visitor is faced with a confusion of doorbells, just about every one bearing a version of the family name. Boeri is a practicing architect and was himself editor of Domus between 2004 and 2007. Although Grima trained at the Architectural Association in London he has spent his career writing and curating, most recently at Storefront for Art and Architecture in New York. Milan is a city that favours its own and his appointment took people by surprise. He calls himself ‘Mazzocchi’s experiment’.

Fifty years ago Domus was a professional magazine dedicated to the craft of architecture and design and Abitare was a consumer-oriented publication focused on interiors. The present editors claim that these origins continue to exert an influence, but it is decidedly subtle – where the current Domus describes its interests as ‘Architecture, Design, Interiors, Arts’, Abitare claims ‘Interior Design, Architecture, Arts’. That said the magazines are quite distinct. Boeri argues that the task of any architecture publication is ‘to cover the space between the physical, real existence of a building and the direct perception that a reader will never have’. At Abitare he is commissioning illustrators, artists and novelists to fill that gap. At the time of writing, Grima had yet to produce an issue of Domus as editor (his first issue is this month), but rather than a screen for vicarious experience, he is envisaging his magazine as a platform to counter architecture’s ‘introspection’ and concomitant ‘irrelevance’ and ‘marginalization’.
On a practical level the magazines share a great deal: both publish international editions, are looking to extend their activities to live events and are alert to online content and digital manifestations (before taking over as editor, Grima tended the Domus website). In theoretical terms, the editors’ common ground is their joint concern with the relationship between social and political life and the built environment. Boeri admits to obsessing over photographs or films of ‘world events with architecture in the background’, and Grima hopes to engage architects with ‘the major transformations in the way that cities operate in the next decade’.

The streets of Milan have changed little since the time of La Notte. The apparently unrepentant mix of private glamour and public squalor adds piquancy to a short visit, but residents say it wears thin fast. The crowds of well-heeled locals queueing for the recently opened Museo del Novecento, a new museum of 20th-century Milanese art, suggest there is a hunger for civic space. Responding to this, Boeri is considering running for local government. Disgusted by the ‘stupid speculation’ that he believes is dogging Milan’s plans for 2015 Expo and frustrated by a magazine’s inability to make ‘big change’, he wants transform the fabric of the city through politics. On the same note, Grima admits that the passing of the old guard, creates a need for ‘reinvention’, but his priority is to edit Domus from an entirely international perspective. In theory Grima and Boeri’s projects should dovetail perfectly, with Boeri creating the urban setting that is an appropriate base for Grima’s global ambitions.