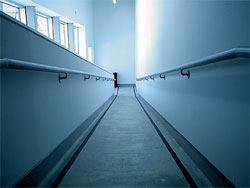 Barry Le Va’s retrospective provides ample evidence that one of the most significant sculptors and draftsmen of postwar art has been overlooked or misunderstood for too long. Eleven major sculptures and over 100 works on paper, dating from 1965 to the present, should help prod the re-evaluation of a career that has persistently pushed sculpture to its formal limits. The first major survey of Le Va’s career in America since 1989 proves that this work is still formidable in its complexity and visceral charge.
The earliest sculpture in the exhibition, Continuous and Related Activities; Discontinued by the Act of Dropping (1967–90), a sprawling network of maroon felt, rolled, unfurled, layered, cut and punctuated with broken sheets of glass, dates from Le Va’s student days at Otis College in Los Angeles. The dispersed ‘look’ of this floor-based work – often incorrectly identified as ‘scatter’, despite its methodical organization, which follows from a ravishingly drawn ‘score’ – has entered the syntax of contemporary sculptural practice with its radicality eventually transformed into a given.
Art history has coldly situated Le Va at the margins of contemporary sculpture’s development, but the body of work at ICA confirms his central position in his generation’s take-no-prisoners attack on the received notions of sculpture and further evidences a stubborn exploration of pre-eminent sculptural issues – dispersal versus accumulation, diffusion versus compression, simultaneity versus series and sequence, etc. – that continued to develop long after ‘Postminimalism’ fell off the art-world radar. While peers such as Robert Morris, Bruce Nauman and Richard Serra briefly flirted with his look before moving on to stake claims elsewhere, Le Va’s development over the past four decades suggests a consistent, if restless, exploration and expansion of the sculptural syntax that follows from his initial, signature discovery.
Although not alone in this, Le Va’s claim on history rests in his advancing the conditions of sculpture beyond the coolly fabricated, self-sufficient object of Minimalism. If by the mid-1960s Donald Judd had finally overturned the hand-wrought modern sculpture of Rodin, then Le Va overturned Judd’s breakthrough within two years (as a student in Los Angeles) by radically reinscribing the artist’s ‘hand’ – in Le Va’s case, the mobile body – into the work of sculpture without nostalgically reinstating metaphorical or psychological ‘content’ into the work.
Le Va’s work is not Performance art, but the body’s absence is always made present, as an index, by the resulting sculpture: it is the viewer who is ‘performed’ by the work. Le Va’s singular sound piece Impact Run – Energy Drain, intermittently occupying the parallel ramps separating the ICA’s two floors, is exemplary of this dynamic. Installed in the first instance at Ohio State University in 1969 as Velocity Piece (Impact Run – Energy Drain), two speakers at opposite ends of the 17-metre-long gallery played a recording of the artist running into the walls for 90 minutes, fulfilling the parenthetical title’s coldly factual description. The work was quickly historicized as Performance art: a photograph freezing Le Va mid-stride gradually stood in for the actual work. But this photograph is no more the work of art than a Hans Namuth photo is a Jackson Pollock painting. Impact Run … is pure sculpture, and, as such, central to Le Va’s evolution.
Like all of Le Va’s sculpture, the piece is site-dependent, not site-specific: it relies on the architectural context but adapts to its container through the deployment of material. Here, on the ICA’s ramped path – roughly the length of the OSU gallery, but vastly constricted in width – the plasticity of the 1969 recording transforms ‘velocity’ into acceleration. It has been suggested that Impact Run – Energy Drain is the most ‘dematerialized’ of Le Va’s works. In fact, it is his most insistently material sculpture if one considers the physicality of sound, and also the most excessive because – unlike felt, glass or metal – sound exceeds architectural containment. As if to prove the point, the recurring, if subtly evolving, thud of Le Va’s energy drain permeated the entire retrospective.
Following from Impact Run, Le Va’s work in the 1970s became increasingly complex, relying less on seductive materials and visceral facture than on missing information. Circular Network: Objects 1971, Area 1972, Activities 1973 (1971–3, 1988, 2005) is three works collapsed into one. Its limited range of materials – cast concrete blocks, thick wooden dowels and sections – articulates simultaneity and process without revealing the order of its tangentially related deployment. Accumulated Vision: Series II (1977–2005) employs unfinished wooden sections to mark overlapping perspectives that extend beyond the gallery walls.
Le Va’s elegant drawings from this period, which make somewhat perverse use of his early architectural training, offer clues the sculpture doesn’t, but it is the conspicuous absence of information that provides this work’s infamous ‘difficulty’. The artist’s noted interest in detective fiction – from Sherlock Holmes to Alain Robbe-Grillet’s The Erasers (1953) – manifests itself in the 1970s, and the work from this period is surprisingly generous to the patient, active observer willing to do some detective work.
Le Va’s recent work, including the majestically scaled 9g–Wagner (2005), which made its début at ICA, has become increasingly weighty, concerned not only with sculpture’s basis in mass and volume but also, I would suggest, with the weight of mortality. To this degree Le Va has made obstinate work that refuses to ‘dematerialize’ and refuses to be refused by art history. Fortunately, like much of the work in the exhibition, history is a process perpetually revealed.