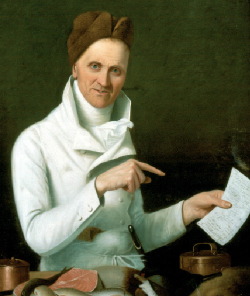 Loose-lipped servants who, one may imagine, endured long hours, modest pay and the occasional humiliation, have recently been busy providing unbecoming portraits of Britain's royals. But once upon a time it was the other way round - masters commissioned portraits of their servants out of esteem. The evidence is there in the 100 paintings and drawings from over 400 years or so that are included in the exhibition 'Below Stairs'.

When originally conceived, the best part of these portraits were sincere expressions of respect for domestic service in an age where it was commonplace; in 1851 there were more than a million servants in Britain. But today the exhibition registers something uncomfortable: a master's apparent gratitude towards his servant can disintegrate into disingenuousness when the trusty servant immortalized is by any measure a slave.

John van Nost the Elder's Bust of a Moor (c. 1700), from the collection of Queen Elizabeth II, is remarkable for its display of deft techniques associated with pietre dure, in which a variety of exotic and multicoloured stones are precisely assembled. The stately bust is of an African man, his name long since forgotten, dressed in a feathered turban, a shirt with delicately scalloped collar, and a bejewelled band dripping over his shoulders, all of which helps us to believe that he was a favourite servant of King William III. But the truth of the matter is that the King was his owner: slaves were often garishly dressed and commonly wore, as does this Moor, a silver collar which often featured a discreet padlock engraved with their owner's name.

As we have learned from the oral histories of slaves and servants in the United States, if the Moor's own recounting of his life had survived, it would no doubt wrestle with the sanctioned legacy this sculpture substantiates. Conscientious revisionism, reconstruction and rehabilitation have become so much a part of contemporary culture that they cannot help but glaze our appreciation of the contents of these galleries. In a suave approach, the exhibition's organizers pre-emptively account for the 'revisionist zeitgeist', welcoming it into the catalogue and wall texts to grease likely feelings towards these pictures that justifiably see them scraping against their original aims, impeaching privilege uplifted beneath the exploitation of the 'lower orders'. In this light 'Below Stairs' flatters the work of our contemporaries, including Kara Walker's silhouettes, Robert Altman's Gosford Park (2002) and the work of Fred Wilson and William Eggleston - especially the latter's photograph Sumner, Mississippi, Cassidy Bayou in the Background (1971). Eggleston's picture is as disturbing as it is empathetic; the black servant Impala, in counter coat, stands respectfully behind his employer emulating the white man's slouched pose. Some will see fidelity; others, contempt from a man trampled into conformity. The point is to miss neither. Eggleston is obviously on familiar terms with Mississippi life, but is also up to showing us a depth to human relationships that co-exists with caste skewing, without forgiving it. So too the greater part of 'Below Stairs'.

In their 1825 edition of The Complete Servant, Samuel and Sarah Adams were unambiguous: 'The supreme lord of the universe has, in his wisdom, rendered the various conditions of mankind necessary to our individual happiness: some are rich, others poor - some are masters, and others servants.' Pictures in 'Below Stairs' no doubt uphold these sentiments, but they can also testify to the survival of humane commitment and personal admiration within such a world. John Riley painted his portrait of Bridget Holmes in 1686 because King James II had commissioned it in admiration for this woman, who served the royals for most of her 96 years as a 'necessary woman' (meaning she emptied the chamber pots). There is nothing here of the vaingloriousness that accounted for the Moor's bust. Not only do we know who Holmes was, but Riley also treats her with open-handed dignity. She is resonant with self-respect, and can play with her venerable position in the household; teasingly she brandishes her mop after a page-boy who peeks out from behind the lavish damask curtain. And while it is true enough that Riley used his skill at realism to parody the Baroque heroic portrait, it was not at the expense of Bridget Holmes.

Apart from the pictures of unskilled but beloved servants, there are portraits of upper-staff, who were professionals and even celebrities of a sort. Immortalized for his extraordinary gifts is Joseph Florance, the French chef to the three Dukes of Buccleuch. In this 1817 picture by John Ainslie, Florance is shown in his kitchen. With something of a Dutch still life - fish and foul - arrayed before him, he wears his chef's coat along with a chic fur hat. (Florance would have made twice or three times in salary what most senior members of the household staff received.) With his cooking knife slipped inside a belt, he points to the evening's menu, which includes his wonderful 'Croquettes à la Montagu', a dish named after the family. But there is more; we know from surviving letters that Florance was not only the adored chef but also a friend and adviser to the dukes. Talent and insight, rather than inheritance, won Florance his position in life, allowing his portrait to foretell what would ultimately befall the aristocracy, and their servants, as the meritocratic ideal took grip and aptitude was ever more rewarded, independent of birthright.

Among the finest pieces in this exhibition is the earliest, the 1614 portrait of Tom Derry, Jester to Anne of Denmark. It is one of a handful of pictures of dwarfs, pipers and related folk who were the household entertainers. But we can see from his dress and his jewellery - gifts from Anne - that Tom was no fool; records tell us he had a servant of his own. Three hundred years after Tom's picture was made, the tradition of servant portraits grew fainter as the traditional servant faded away. This must be welcomed as the materialization of meritocracy, but even more so were one to imagine an updated analogy to this portrait: French President Jacques Chirac, with deep appreciation for a jester's lifelong service tickling the Gallic funny bone, commissions his portrait to hang for perpetuity at the Elysée Palace. Paging Jerry Lewis.