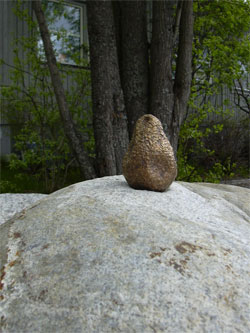 The Bauhaus taught that, if form was to follow function, the first rule was to observe the principle of Materialgerechtigkeit: the need to do justice to the material you work with. This ideal of a transparent materialist aesthetic based on a strict economy of means still remains compelling. In practice we know what an object, building or sculpture will look like when it is designed to reflect the properties of industrial materials such as steel, glass or concrete. But what would it mean to do justice to materials that are neither plain nor pure but mixed and messy, like most of the stuff that makes up the reality of our surroundings?

Bernd Krauß’ works address just this question. With a no-nonsense, pragmatic approach to making art, he finds systematic solutions to the problem of what to do with the stuff that accumulates around him every day – waste paper, lumps of wood, cardboard boxes, Sellotape, linoleum flooring, oil paint or mouldy fruit. He may tear every page out of a magazine, then fold each one to form a strip an inch wide and then stick all the strips together with Sellotape to form a cylinder, or make tiny alterations to a cardboard box and then re-box it in a Perspex case. Just as he will squeeze tube after tube of oil paint onto pieces of chipboard and consider the resulting abstractions, so Krauß will carve compositions into the lino on the floor of his studio or scrape the bark off a pile of logs and treat it as a sculpture. These wood pieces echo the rare beauty of work made by art enthusiasts in evening classes who, in the process of discovering the joys of abstract sculpture, create infinite and surprising variations on the phallic form.

All Krauß’ works are produced in series, with each one forming an independent strand in his overall practice, which has developed consistently over the years. He establishes a range of basic methods and then applies them to various tasks. He used the paper-folding technique, for instance, to tape a tutu together from strips of paper which he then did ballet exercises in. The scraped logs in turn feature in Krauß’ 1999 home-video remake of Rainer Werner Fassbinder’s Der Müll, Die Stadt und der Tod (The Garbage, the City, and Death, 1975–84). Each log had its own name tag and objects attached to it, identifying it as a particular character: two balls of string for a girl’s breasts, for example, or a baseball cap for a playboy. Krauß then animated the pieces with basic stop-frame editing and dubbed in the dialogue from behind the camera.

Through the formalized treatment of his materials Krauß displaces meaning in unpredictable ways. Still, content seeps inexorably into his work, in the same way you involuntarily pick up bits of gossip. Another of Krauß’ ongoing projects is Der Riecher (The Sniffer, first published 1997), a photocopied A4 magazine with handwritten articles and hand-drawn illustrations. Based on the idea that any material is suitable for publication, Der Riecher mixes articles on food, sport, sexual fantasies and other everyday concerns with comments on other people’s private lives that are funny, insidious and, as likely as not, true. Krauß interprets things in a style that, like gossip, is both cursory and pointed. Mutti (Pressel) (which can mean Mama, Old Lady or Cow) and Vati (Daddy, Old Man, Twit; both 2004) are two sculptures made from cardboard boxes hung on the wall. The former is a box dented in the middle on both sides to form a waistline, with its front flaps folded to resemble something like a vagina. The latter is a brown box with six vertical slits cut in the front, through which a light blue belt is drawn to hold the flaps together like a zip over the beginnings of a paunch.

Managing to be both spontaneous and conceptually strict, Krauß deals with each cardboard box he finds in the same way: one box, one material problem, one sculptural solution. So, unlike many of his contemporaries, he neither reifies sloppiness as a virtue nor cultivates a crypto-individualist mythology to back up his work with a narrative. Instead he voids artistic parameters of quality and meaning by methodically reducing his art to a day-to-day practice of working on materials. If there is beauty, it comes as a surprise. Avokado (Avocado, 2005), for instance, is a shrivelled avocado cast in bronze and placed on top of a boulder. The piece immortalizes the avocado’s state of decay in an utterly inconspicuous monument. What better way to do justice to a dead fruit?