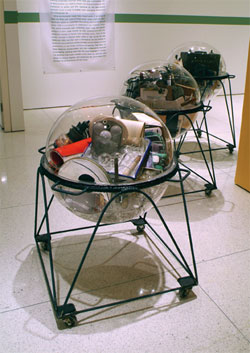 Last year was the warmest on record. While this stark statistic was not enough to galvanize the US government into taking steps to slow global warming, the pressing crisis has catalysed a diverse range of contemporary artists, designers and architects. ‘Beyond Green: Toward a Sustainable Art’ brings together 13 artists and artists’ groups to address the concept of ‘sustainability’, a term incorporating environmentalism, social justice, economics and design aesthetics but not usually associated with art. With this broadening, according to curator Stephanie Smith, sustainability ‘moves past a prior generation of more narrowly eco-centric or “green” approaches’.

‘Beyond Green’ thus asserts that certain artists have absorbed the earth-friendly designs of the past few decades and moved away from single-issue approaches into an energetic hybridization of art, activism and engineering. The exhibition, co-organized by Independent Curators International and the University of Chicago’s Smart Museum of Art, features installation art, architectural interventions, community-based projects and product design. This eclecticism is the show’s greatest strength. Setting usable items alongside art works implies that what they share – their ‘function’ – is critique. Whether art, design or some new combination of the two, many of these projects exist at the intersection of utility and lyricism.

For example, Michael Rakowitz’ paraSITEs (begun in 1998) are portable tents made in collaboration with homeless people in Boston. Designed to circumvent punitive anti-homeless regulations, these lightweight structures inflate when attached to a building’s outdoor heating vents, providing warmth and shelter. The paraSITEs are customized to fit the needs and desires of those who use them – one, designed for a sci-fi fan, resembles Jabba the Hut. As such, they are at once site-specific sculpture, collective street action and vivid portraiture.

Another project that engages politics and poetics is Jennifer Allora and Guillermo Calzadilla’s video Under Discussion (2004–5), in which a man attaches an outboard motor to an upturned conference table and pilots it around the coast of Vieques, a Puerto Rican island ravaged by years of US military testing. The bombing was halted in 2002 as a result of local and international protest and negotiation; the visible incongruity of the furniture/boat humming through the water perhaps speaks of this metaphoric ‘turning of the tables’. Under Discussion is an understated, evocative meditation on Vieques’ disputed history and uncertain future.

Numerous artists reflect on the ethics of everyday consumption and waste. People Powered, the ‘brand identity’ of artist Kevin Kaempf, collects half-used cans of paint, recycling them to make all-new hues in Loop (2003– ongoing). The collaborative Free Soil in its interactive installation F.R.U.I.T. (2005) urges visitors to question the tremendous resources expended in shipping produce across continents and hemispheres from farm to city. ‘When you purchase an orange from a local grocer […] you are purchasing more than what can fit in your hand’, explains Free Soil in the catalogue. Consumer responsibility is also at the heart of JAM’s shoulder bag prototypes, equipped with flexible solar panels that can charge mobile phones (Noon Solar, 2004). The snappy bags are modelled in photographs by attractive, dreadlocked hipsters. JAM, a collaboration between Jane Palmer and Marianne Fairbanks, displays a canny awareness of how environmentally conscious choices are bound up with fashion, taste and the market. Sure, the bags can power a laptop, but they also better look damn good.

Some aspects of this show veer towards the outmoded ugliness that can still cling to ecologically-sound design. The wall texts were printed on Homasote™, a 100 per cent post-consumer waste fibreboard, whose hard-to-read brown nubby surface bespoke a certain unbleached ethic. That Homasote™ should be so insistently named highlights another evident sub-theme: the increasing visibility of ‘green’ branding, entrepreneurialism and product placement. For instance, Frances Whitehead’s Primary Plus (2005) appropriates commercially made inflatable containers made for relief efforts. Each will be returned at the show’s end for uses such as firefighting and cleaning up toxic spills. These droopy, poufy, Eva Hesse-like shapes are writ in the colours of disaster – emergency red, safety orange, humanitarian blue – and are prominently marked with the logo of manufacturer Texas Boom. As such, Whitehead’s ready-made strategy interrogates the corporate profits generated by catastrophe.

The exhibition design itself was an exercise in sustainability: no new walls were built to accommodate the works, saving materials and energy. Given this attention, it was hard not to notice the museum’s thermostat, set on the wall alongside People Powered’s reused paint mix. The temperature of the gallery space itself was thus implicated, as was, by extension, the comfort or discomfort of the viewer. While the museum’s thermostat, heating efficiency and energy costs were not a part of the show, they could well have been: much of the work in ‘Beyond Green’ stems from 1960s’ and 1970s’ institutional critique practices which asked questions about the support structures and economics of displaying art. Like early Conceptual art, the exhibition urges us to think about the production and circulation of art. How is the fuel used for shipping an orange any different from the fuel used for shipping an art work?