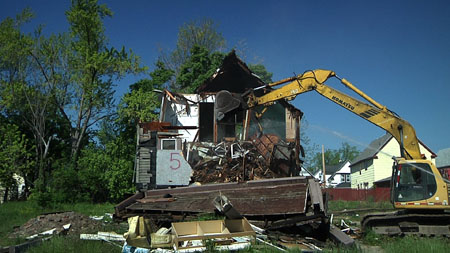 Buffalo, in upstate New York, is not on those international curator-collector class itineraries which include Sharjah, Gwangju and São Paulo. ‘Beyond/In Western New York’, a multi-venue exhibition staged in and around the troubled Rust Belt city, is a sort of biennial, but not that sort of biennial. Or not quite yet. Bruce Ferguson, founding director of SITE Sante Fe, and a veteran biennial curator, was brought on as an ‘International Project Consultant’. In his catalogue essay, he claims that the show knew ‘how to deliberately place itself within the biennial “effect”’. This formulation suggests a certain scepticism towards global art exhibitions, while at the same time welcoming assimilation into that model. There is something apt about the ambivalence in Buffalo, where a kind of passive-aggressive pragmatism is celebrated as a civic virtue. It is, as a popular local T-shirt slogan puts it, the ‘City of No Illusions’.
Once one of the great industrial centres, it’s now more likely to be treated as one of ‘America’s Failed Cities’. It is a place where the term ‘post-industrial’ hits home in a visceral way: people here once made things, and don’t any longer. Disused grain elevators line the waterfront – it is too expensive to demolish them. Signs of former prosperity are everywhere. The city’s ornate central train station and its grandest hotel sit vacant. Buffalo is, of course, by no means unique: the decaying post-industrial city is the hot-button issue of urbanists everywhere. And everywhere, urban optimists are proposing cultural solutions to economic problems, trying to ‘rebrand’ cities, hoping bike lanes and loft spaces are sufficient lures for the so-called creative class. The ‘biennial effect’ is, all too often, deeply connected to these revitalization strategies.
Thankfully, ‘Beyond/In Western New York’ held itself apart from boosterism – it was, one could say, ‘the biennial of no illusions’. Much of its appeal came from its lack of dogma. The show is anything but a new civic scheme: it has its origins in a juried regional show initiated by the Albright-Knox Gallery in 1934, called simply ‘Western New York’. In the late 1970s, a curated invitational alternated with the juried show. (The first year’s edition included work by Robert Longo and Cindy Sherman, who had been showing at Hallwalls, the Buffalo alternative space Longo co-founded in 1974.) In 2005, the regional remit was expanded to include sections of Pennsylvania, Ohio and Ontario.
The latest iteration featured a new innovation: a group of higher-profile artists from beyond the region were invited to burnish the roster. Many of these inclusions, though, seemed arbitrary. Do-Ho Suh’s contribution, for instance, a seven-metre-high figurative sculpture titled Karma (2010) placed on the museum’s lawn, was an ambiguous piece of civic statuary, but a piece of civic statuary nonetheless. It could have been anywhere. By contrast, Genesee and Moselle (2010), an installation by New York City-based duo McCallum & Tarry, offered a first-hand perspective on the city. Perfectly sited in the observation deck of Buffalo’s gorgeous but faded Art Deco city hall, a series of paintings reproduced clippings from the city’s black-owned newspapers. Dating from the 1960s and ’70s – the period of Jacqueline Tarry’s childhood in East Buffalo ­– they documented riots and visiting celebrities, bits of everyday African-American life, literally relocating them to the centre of municipal authority.
Much of the most valuable work came from local artists. This work was ‘regional’ in the best sense: not parochial, but speaking to a real, often ambivalent, connection to place. At the Burchfield-Penney Art Center, Last House (2010), a three-channel video by Carl Lee documents the demolition of a condemned two-storey house from multiple angles. It is a devastating look at a common occurrence in Buffalo: there are tens of thousands of empty buildings in the city, and every day more are destroyed, by official decree or arson. The fragility of house and home was a sub-theme throughout the Burchfield-Penney show. Jean-Michel Reed’s unsentimental snapshot-style photographs (2009–10) record fires and ruined, abandoned interiors. Julian Montague’s droll Secondary Occupants Collected and Observed (2008–9) is a nutty mixture of graphic design and taxonomic brio, a multi-dimensional catalogue of non-human home invaders – rodents, birds and insects – that suggests the work of a deranged but thorough researcher. A similar note was struck by Ontario collective TH&B with Swarm (2008–9), their installation at the Buffalo Arts Studio: a dangerous-looking buzzing telephone pole encrusted with mysterious organic forms. Some of the most striking pieces dealt with the ominous beauty of the industrial environment, a sort of Rust Belt sublime. Ravishingly strange imaginary landscapes verging on science fiction, the paintings of Randall Tiedman, a self-taught artist from Cleveland, were a highlight. Sarah and Suzannah Paul, also from Cleveland, produced a gorgeous, unabashedly theatrical installation out of projected images of flaming smokestacks and snatches of song (Little Miss Cleveland and the Flaming Sunset, 2010)
A different perspective was presented by ‘Artpark: 1974–84’, a historical show curated by Sandra Firmin at the University at Buffalo Art Gallery. The exhibition provided a fascinating look at a mostly forgotten bit of the area’s recent artistic past. Artpark was a publically-funded experiment, residency programme and avant-garde fairground, located in Lewiston, near Niagara Falls. Founded shortly after the death of Robert Smithson, and inspired by his work, it attempted to combine a post-Minimalist anything-goes spirit with a post-hippie populism. Every summer for a decade, it presented elaborate artistic projects and performances, while at the same time trying to please crowds with mimes and cooking classes. Among many others, Chris Burden, Nancy Holt, Gordon Matta-Clark and the late Dennis Oppenheim did some of their most interesting work there. Filled with fascinating documentation and ephemera, it was a heroic bit of archival research and a joyous document of an attractively rangy, Utopian moment – one that now seems almost as far off as the days of Buffalo’s prosperity.