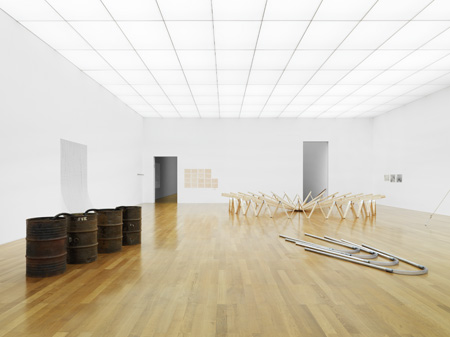 ‘Bill Bollinger’s last real exhibition was in January 1970 […] [It] was a kind of mini retrospective. The invitation card documented one of the works: we had taken a long piece of wood, driven to the banks of the Rhine, thrown it into the water, and taken a photograph of it. I have always closely associated that black-and-white image of the floating wood with Bollinger.’

This pensive, penetrating reminiscence is from a 2007 published conversation with Rolf Ricke, the Cologne gallerist and collector who championed American Post-Minimalism and Process art in the late 1960s (showing Eva Hesse, Lee Lozano and Richard Serra, among others). Ricke’s thoughtful tone suggests the tragic arc of the New York artist Bollinger’s career, which began with terrific promise and ended too quickly. But it is his evocation of that ‘floating wood’ that so strikes me. As I wandered the bright, boxy galleries of the Kunstmuseum Liechtenstein, where Christiane Meyer-Stoll has assiduously mounted the first survey in four decades of Bollinger’s forgotten oeuvre, the feeling that emerged from the approximately 80 works was of inexplicable buoyancy. Though the materials – chain-link fence, oil barrels, pipe, rope, graphite – and the unmitigated forms they take recall Bollinger’s peers like Serra and Carl Andre, the works have none of the macho heaviness that one would expect. Instead, his pieces seem to float ineffably atop some invisible body of water, skirting the ground even when they rest upon it.

This tendency might be traced back to the artist’s undergraduate studies in aeronautical engineering in the late 1950s at Brown University, Rhode Island, before he moved to New York and started painting. Gradually he morphed into a sculptor, and in 1966 his career began in earnest with his first New York solo show at the Bianchini Gallery. The extent of Bollinger’s early accomplishment and recognition is difficult to overestimate. He took part in nearly every fabled exhibition of that time, from ‘Nine at Leo Castelli’ in 1968, to ‘Anti-Illusion: Procedures/Materials’ at the Whitney Museum of American Art, New York, and ‘Live in Your Head: When Attitudes Become Form’ at the Kunsthalle Bern (both 1969), where Serra installed Bollinger’s works for him. A year later, perhaps unsatisfied, Bollinger rented a loft overlooking the Hudson River in the Starrett-Lehigh Building to mount a huge exhibition that financially ruined him and ended his working relationship with Klaus Kertess and others. In the years following, he moved upstate and fell out of the art world, though he continued making work. In 1988, he died of alcoholism, unremarked.

The Kunstmuseum Liechtenstein retrospective concentrates on the artist’s production from 1966 to 1973, though most works are gleaned from a cogent, wildly productive three-year period. Bollinger’s interest in what he called ‘the fact of the form’ is clear in the show’s opening work, Cyclone Fence (1968), a long, fluid, two-by-15-metre fence that rises like a wave from the floor before laying flat again. The work is simple, clean, faintly sensual, mostly non-expressive; it exemplifies the very ‘fact’ that so concerned the artist. Elsewhere, its watery metaphor is manifested in an evocative series of floor works of transparent plastic hoses filled with water and draped in austere lines or circles, their ends simply tipped up to keep the liquid from spilling out – a sensitive and yet entirely sensible gesture that marks Bollinger’s touch – as well as bleak, buoyant pieces featuring water-filled barrels, dark plastic hoses slithering atop and into them. Untitled (1970) – two wheelbarrows filled with water positioned side by side – evokes the irreducible Modernism of William Carlos Williams’ 1923 poem ‘The Red Wheelbarrow’, as well as the poet’s working philosophy: ‘No ideas but in things.’

If Bollinger’s rope works bolted to the floor in clean lines or winging it off the wall recall Fred Sandback’s delineation of space, his fence pieces – which might lay flat across the floor or hang like paintings on the wall – locate the grid in material alone. Like his peers, Bollinger thought in modules, sequences and site-specificity: ‘Piece to consist of a minimum of two modules, or as many more as wall space permits’, reads one 1968 plan. His myriad works on paper, conversely, often consist of a horizon line smudged with colour or shadowed with brilliant gradations of sediment-like spray paint, their colour and lineation suggestive of Georgia O’Keefe’s brilliant abstractions as well as Brice Marden’s early works.

To that end, it is difficult to see such remarkable and remarkably curtailed work without drawing artistic parallels or noting their influence (his 1969 Droplight and graphite floor parent Félix González-Torres’s later works, his 1968 Water Pipe proves prescient of Alicia Kwade’s sculptures), just as it is hard to disregard the dark wave of biography looming over this retrospective, where story must substitute for artistic growth. In a letter to Basel dealer Felix Handschin, Bollinger wrote: ‘It is all very easy to execute, does not exist until it has been executed, ceases to exist when it has been taken down.’ Perhaps viewers of Bollinger’s work should take his lead, letting it simply exist in its ‘fact of form’ while it is up, and not letting the tragic wave of his story take you – or the oeuvre itself – down.