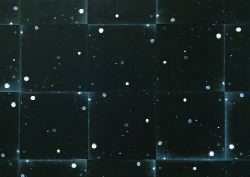 As more people find themselves working in the various 'image industries' (new media, film, television, design, etc.) the status of the image as an object of labour is becoming more and more considered. Its narcotic quality and ability to transport the viewer, a long-standing vestige of Romanticism, are slowly giving way to the hyper-attentiveness of digital manipulation and high design. Every user of Photoshop, most of whom are not artists, knows that images are built, composited and then rendered - even if such activities involve nothing more than retouching a red eye. If the last century's aestheticians were predisposed to think of images in terms of their Gestalt characteristics (scattered or informe versus coherent or immanent), 21st-century spectators are, indeed, quite likely to become connoisseurs of parts of images - seams,bleeds and overlays - as well as the operations and criteria devised to manoeuvre such parts.

What this means for painting is up for grabs. The Winter Line (2000), the fourth painting installation in Blake Rayne's ongoing project 'Seasons', suggests that links between the most traditional and the newest of media may not be so vexed after all. Rayne's is one of the more reflective and ambitious painting practices of the moment. Blending photo-based and painterly realisms with a vigorous attention to display and medium, The Winter Line is a compilation of very deliberate mechanical and conceptual operations. Seven medium-sized canvases, reminiscent of both Richter and Ryman, depict a repeating, almost photographic tree-branch set against a deeply blurred background image of earth, horizon and sky. Behind and on top of the branch images, fades of cool blue and white, motes and unidentifiable tracings imply surfaces beneath surfaces, false depths and artificial opticality. In a gesture impossible to fathom without the ubiquity of digital imaging procedures, each canvas‚ figure and ground was rotated on its axis and flipped, producing seven different paintings with the same realigned content. These movements, combined with the branches‚ kinetic weave and optical clutter, are like a kind of programming - the outcome of which is a disorientation not unlike motion sickness.

Even as they draw on the procedural motifs of new technology, Rayne's paintings are fundamentally self-referential. This is especially clear in a pair of larger paintings which show a quasi-photographic image of winter branches on one canvas and the same image's mirroring or inversion on another - almost as if Rayne had painted the first painting and, while wet, pressed it to the surface of the second. Crucially, the indexical function of the first photo-realist image is almost eliminated by such a procedure. Although the two paintings are derived from the same image, they look nothing alike. The photo-based 'template' painting is crisp and cool and fits well within the analytical formalism of the seven smaller works. The 'print' or mirror painting, however, is a mess of abstracted and fluid lines and has none of the apparent intentionality of its twin.

By using the most rudimentary forms of image manipulation - rotating, inverting, printing - Rayne calls attention to our current fascination with built or programmed images, a fascination typically thought to bode ill for painting. But in Rayne's case there is no nostalgia for what painting can no longer do; rather, a dizzying insistence on the possibilities of new imaging methods to invigorate painting's understanding of itself. Needless to say, this kind of optimism leaves itself open to some obvious questions: is the 'Photoshop mindset' really all that analytical (and if it is, to what end)? We may think of images as built things and fetishize the procedures used to build them, but does this make them perform differently? Is the digital image, with all of its inlaid programming, received any differently from its predecessor? Questions of spectatorship and reception matter to Rayne, whose paintings often load on the criteria and conceptual gestures in order to destabilise unreflective consumption.