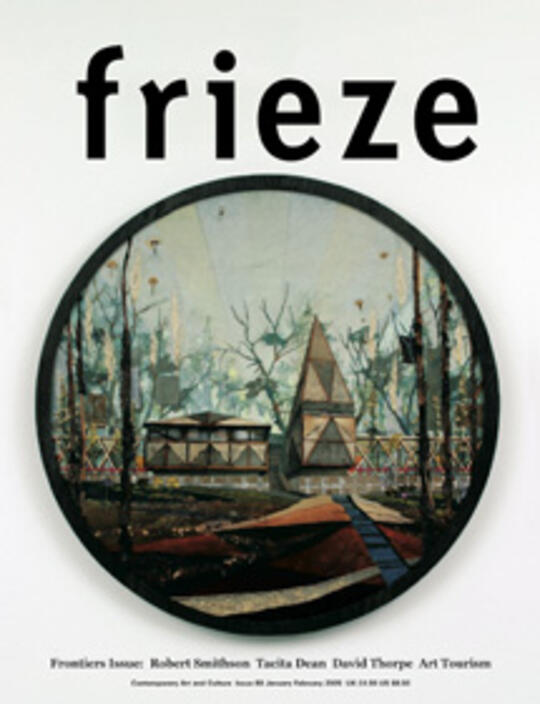 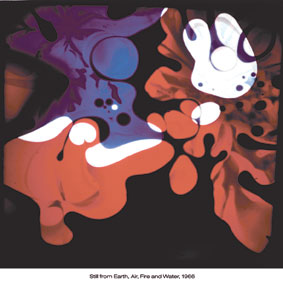 Arthur Marwick begins his important book The Sixties (1998) by stating that the period was ‘of outstanding historical significance in that what happened during this period transformed social and cultural developments for the rest of the century’. A major aspect of ‘what happened’ was the expansion, technically and conceptually, of visual art. One such expanding strand involved the interpenetration of a range of different media – music, film, performance and other forms – the combined effects of which provided a kind of primitive but highly seductive multimedia experience that affected both its producers and consumers in sometimes quite extreme ways.
This show by the Boyle Family presents in London, for the first time since 1969, four short but historically important films produced by the Boyles at the end of that radical decade. Black on White (1967) records the effects of acid on zinc and other materials, and Son et Lumiére for Earth, Air, Fire and Water (1969) tracks in slow motion the actions of these elements, while Chromoprobe (1967) and Beyond Image (1969) continue the experimental, open-ended approach to filmmaking, again using the recording and magnifying of natural materials as a way of generating highly volatile ‘psychedelic’ imagery that can be presented – as indeed it was at Construction – as a ‘hand-in-glove’ accompaniment to 1960s Pop music with would-be radical intentions.
There’s no question that the Boyle Family were, 30 or 40 years ago, among the most innovative artists working in the UK. Along with Gustav Metzger they pioneered the use of simplistic but highly effective light shows that, when run in tandem with the musical meanderings of the period’s most adventurous rock groups – Pink Floyd and Soft Machine, for example – generated what must have been at the time a truly astounding plethora of effects. Furthermore, the implications of such novel alignments of sound and vision bore more that a merely decorative tint. Implicit in such work was the suggestion of entirely new ways of organizing society, of integrating the individual with the group, fostering at the same time physical and mental experiences that placed the participant well beyond the boundaries of what had been socially acceptable only a few years earlier. But Metzger’s early work, though to some extent rendered banal by the largely depoliticized culture that is the unfortunate legacy of the 1960s, remains the more challenging of the two, if only because its author refused to make, from the very beginning, celebratory or affirmative art.
In contrast, the Boyles’ contribution appears rather tame. Although the multifarious shapes and colours in their films at first appear to be random – deliberately disordered combinations of pseudo-biological patterns and enigmatic, spasmodically shifting insect-shaped forms – the aural and visual components of the pieces are, in fact, very carefully aligned. A musical climax within a track by, say, Soft Machine, occurs just as the mass of squirming, iridescent insects or bursts of blood and vomit changes tack or is replaced on the screen by previously unseen elements. What is noticeably lacking – apart, of course, from the actual historical context in which these films were made – is the input of psychedelic stimulants of the sort that would have been easily accessible when the works were first shown at key 1960s venues such as London’s UFO club and Institute of Contemporary Arts. At their initial screenings these films had been projected onto and around the members of pop bands, and the volume level was, so it is reported, extremely high. But here one was encouraged to view the works while sitting in a miniature cinema space, with the projections themselves neatly aligned with the edges of a conventional rectilinear screen.
These toned-down presentational parameters do little to enhance the works’ potential resonance, their possibly vivid and exciting effects on the spectator. Tamed, rather, by the bland white walls of the gallery-cum-cinema, the relatively low volume of the sound-track and the absence of the arguably integral component of LSD or other such drugs, ‘Early Projections’ (as the show is unimaginatively entitled) does little to reconstruct the supercharged, super-cool ambience of life in late 1960s Britain. Even at the show’s private view the mood was one of reverence and respect for the auratic factuality of the historic documents that these works have become. No one seemed to know where the Boyles themselves were hiding out. The real party was, it seems, elsewhere.