‘Is it still an abstract painting if there’s a figure in it?’ Brian Bress is talking about his latest work. The question, which threads through all of his most recent videos, is insistently literal-minded, occupying overlapping territory between common sense and nonsense. In these pieces, figures – living and breathing – are found ‘in’ paintings that Bress stages in his studio. Shown earlier this year in ‘Under Performing’, the artist’s second solo exhibition at Cherry & Martin in Los Angeles, the silent tableaux are presented on colourfully framed flatscreen monitors, the camera’s fixed position locking backdrop and floor into a single plane.

Bress’s painterly language is based in the strange re-routings of landscape painting and Modernist design via the thrift store, the domestic sphere and the high seas. Dazzle camouflage patterns, generic woodland scenes and bastardized Bauhaus motifs rendered in a garish 1980s palette all start out as flat
fields for contemplation. Then the figures quietly invade. Camouflaged in costumes and bulky foam masks of the la-based artist’s making, they blend with the backgrounds, introducing live action to a two-dimensional tradition of trompe l’oeil. They are mischievous but not wild: with a couple of dance-steps or the stagey half-bow of the circus showman, they step out of line just far enough to dissolve the illusion. Bress’s characters move slowly and hypnotically, as if underwater, on a constant loop: in Relatives (Devon, John, Jason, Lewis) (2012), for example, four figures in collaged masks bob gently in the turquoise surf for almost half an hour, while, in the minute-long Beadman (2012), the eponymous character jumps in slow motion as the weighty beads that cover him from head to toe rise and fall. 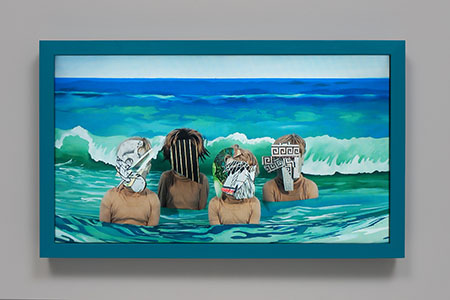 When Bress puts a figure ‘in’ a painting, with the partial hope that comedy will ensue, his tone is not far from that of children’s tv shows, like Sesame Street, which promote pedagogy through play. These programmes hinge on a particular approach to literalness and the hypothetical; actual versus imagined depth is the sort of distinction they happily obliterate for the sake of larger lessons in curiosity and imaginativeness. (This is similar to the way in which cartoon characters in such shows are often made to occupy the ‘real’ world.) Bress’s work channels this willingness to take the implausible seriously. Indeed, ‘a sort of kids’ show gone wrong’ is how he describes Rock Cowboy (2006), a pseudo-pedagogical scenario about tolerance and split identity where a talking pile of styrofoam rocks exhorts viewers to consider the ‘feelings of everyone’. The video dates to his time as an MFA student at UCLA, where he was a painting major who made videos.

In more recent videos, a cast of costumed characters speak to the camera in short intercut scenes. Narrative is limited to what can be gleaned from snatches of conversation and their strange professional guises. An evasive gent with a pink sock over his face, a boxer dissatisfied with his lodgings, a tuxedoed performer with a sequined handbag on his head who calls himself Captain Comfort – Bress plays them all in Status Report (2009), which was shown earlier this year at the New Museum in New York. He describes his weighty, suffocating prosthetic costumes as ‘endurance tests’, but these videos are less documentation of durational performances than tightly edited sequences of quasi-improvised bursts. Status Report’s soundtrack transitions as abruptly as its scenes, moving from Bress’s tuneless falsetto trumpetings to fragments of Billy Joel’s ‘Piano Man’ (1973), to the echoing footsteps of figures in empty stage-sets. Sometimes figures sync with the music, briefly abandoning themselves to solo dance-offs – a comic staple for Bress’s characters, who use a stunted language of catch-phrases and signature gestures.

Bress’s sets are constructed in the studio as large-scale collages, whose peeling paper edges and cardboard props recall homemade theatre sets. His collages conceal the intense labour of their making, although filming makes Bress’s handmade costumes and cobbled-together sets look slicker than they are up-close; canvas bodysuits are stiff with paint, props reveal unfinished versos. The masks worn by the figures in Relatives (Devon, John, Jason, Lewis) are enlarged, three-dimensional versions of flat paper collages that Bress has painstakingly produced and painted by hand.

In Creative Ideas for Every Season (2010), the first of his videos to follow a scripted narrative, an older woman drives a cardboard car across a barren collaged landscape filled with detritus. (Bress is currently developing a second scripted work during a residency at Yaddo, the artists’ community in upstate New York.) Characters come and go as the woman continues her drive, dourly intoning lines from Agnes Martin’s writings. She summons one figure by drawing his profile on the windshield. Others simply appear, including a character eating spaghetti and meatballs in a shaggy fur suit, and a mechanic who obsessively harps on the question of ‘work versus hobbies’ while rummaging around in search of the vehicle’s user manual. Like all the other characters, the mechanic is happily impervious to the woman’s bleak vision of what constitutes a serious working mode or an adult way of life. While making a theme of the ways we split off practical, ‘real’ labour from the aspirational craftsmanship of the enthusiast, Bress rejects this divide. Even his crankiest characters adopt an alternative mode of restless, happy creativity, an outlook evoked by Martin herself when she noted that: ‘Happiness is being on the beam with life – to feel the pull of life.’