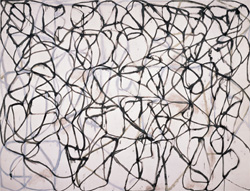 The first gallery in Brice Marden’s exquisitely hung retrospective, ‘Plane Image’, included three works from 1966: Nico, The Dylan Painting and Nebraska. Apparently simple, these works are in fact totally irresolvable. Each is a differently proportioned horizontal rectangle, and monochrome but for a slight strip along the bottom edge. Along this line short drips of paint emerge from the main body of the work, visible against the primed canvas surface. It is impossible to fix an idea of the painting’s colours, which seem to change each time you return, but even as you stare around the surface there appear to be shifts, with areas lightening and darkening. The colours are reminiscent less of nature than of the look of overcast twilight city skies, polluted by petrol and light. The bottom strip serves as a record of process and at the same time provides the very slightest suggestion of landscape: a kind of ground in front of the ‘sky’ above, hinting that Marden was as interested in a pictorial tradition as he was in making literal objects. The final tension has to do with viewing, for there are at least three ways to look at these works. First you stare into the main plane, un-focusing your eyes to enjoy colour. Then the bottom line intrudes into view: you re-focus and awake from your reverie. Finally you step to the side and look at the painting from an oblique angle. From this unorthodox vantage point various marks emerge in the main body of colour to complement the more obvious drips below: scrapes and other kinds of drawing, almost concealed signs of activity but which nevertheless are insistent once glimpsed, enlivening the works in unforgettable ways.

Marden made these paintings using a mixture of oil and beeswax. The works make you want to claw and scoop into them, not so much to destroy as to ingest them. Marden would continue to exploit this right up to the late 1970s, during which time he went on working with strange, greyed colours, recalling industrial products and sometimes natural phenomena (for instance, his four-panel The Seasons, 1974–5). The paintings were made on multiple panels, usually abutting in vertical bands. Even where the composition is symmetrical, the colour arrangements push the viewer away from a stationary central viewing position, insisting on lateral movement. Pumpkin Plumb (1970–3), for instance, has two pumpkin-coloured panels flanking a central grey, but, depending on where you stand, one orange always seems darker than the other. So if the composition seemed simple, the experience of viewing it was never so. Nonetheless, Marden next chose to complicate the composition by assembling panels in configurations recalling architectural forms such as doorways and columns. This phase of his work was exemplified at MoMA by the 18-panel Thira (1979–80) – for me a problem painting, because the explicitly referential panel arrangement renders the colour shifts of secondary importance.

In the mid-1980s Marden moved to filling single canvases with webs and loops. The MoMA installation suggested several possible reasons for the shift. Did he reject the over-complication of Thira and decide to make lines not with the joins between panels but by simply painting them?

Was the catalyst his experiments with painting on marble? Or was his encounter with oriental calligraphy the determining factor? Whatever the case, by 1989 his new method reached a climax with the extraordinary ‘Cold Mountain’ series. Once again the paint marks are both material (spatters, drips, broken lines) and evocative (of calligraphy, rippling water or rain). The literal surface of the canvas is emphasized by the loops, stretching to almost all borders. Yet there is some sense of illusion, as one layer of marks seems further away from the front plane, as though behind a bank of fog.

The balance between control and accident in these and other paintings such as The Muses (1991–3) is remarkable, yet the paintings that occupied the last two rooms, although undoubtedly handsome, seemed too controlled. Marden’s lines grow less erratic and angular, with every band a regular colour and thickness. Loops stretch along the borders of the canvases like a painted frame. There is a risk of the decorative here that muted colours can’t quite assuage. The final paintings in the show, meanwhile, attempt a fusion of contemporary commercial colours and 1960s’ seriality. The Propitious Garden of Plane Image has six panels and colours. Each has a ground of one colour and loops of the other five. The paintings are certainly dramatic – the yellows and oranges particularly livid – but the serial strategy seems overbearing and out of place.

Unfortunately, to reach the artist’s drawings you had to go downstairs. The most fascinating examples were investigations that Marden pursued only in this medium. The ‘Grove Group’ (1972–6) is a series of five drawings, each a dense black rectangle, differently divided. The blackness is so dense, however, that the divides are only just noticeable. 4 and 3 Drawing (1979–81), meanwhile, was made on thick, absorbent paper and covered by a grid of varying coloured lines whose authority is broken by amorphous blots. Marden’s drawings rarely serve only as studies, and indeed some of them follow paintings, such as the Cold Mountain Addendum works (1990–2). Marden covered a surface with fine calligraphic ink lines and then concealed portions of some lines with gouache. The black lines make you picture the artist drawing in free unpremeditated movements, but the gouache suggests a slower and more mediated process: the artist looking at his work and carefully choosing which lines to cover and which to leave.

This retrospective elegantly illuminated the shifts in Marden’s career, but what is the significance of this show now for other practices? At their best, Marden’s insistently material works invite careful looking, and the slightest and most concealed marks count the most. At the same time they act on a grand scale and allude to natural, ancient and bodily forms. Much contemporary American painting (and virtually everything included at the recent ‘USA Today’ show in London) attempts this grand scale and references, but little contains the material subtlety that gives Marden’s work its balance.