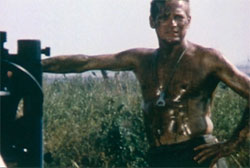 Bruce Conner is a prophetic artist. Read back through his comparatively scant bibliography, and it readily becomes apparent that he is one of those rare individuals with a prescient ability to get to the heart of the matter. In the late 1970s the heart of the matter was, among other things, a flourishing Punk scene in Northern California, characterized by its raw, unbridled anarchist spirit. In 1978 Conner took photographs of this world, mostly at the legendary Mabuhay Gardens club. He captured the performances intimately, with each picture manifesting the essence of the ‘split second’. His shots are heady, rowdy, hot and sweaty. In a tempest of black nail polish, whisky bottles, graffitied walls, pouting lips, ripped clothes, overturned tables and hurtling bodies his camera is the steady eye in the storm, the calm around which chaos seems to revolve.
With his photos hung in a single, continuous band around the galleries, the installation induces a cinematic reading. Though clearly not culled from a single evening, the reappearance of various protagonists suggests a loose narrative structure. His subjects do not pose so much as perform for the camera (insofar as the entire Punk scene is a collective performance, the camera is treated as a necessary element). Costumed and defiant, they explode on-stage and off in acts of passionate despair, their drugged nihilism and self-destruction pictured as violent acts of collective catharsis. In Amy (April 30, 1978) (1978) a kilted, kohl-eyed girl stands hand on hip, holding a shot glass. Behind her, lyrics scrawled on the wall incompletely proclaim, ‘This is the modern wor…’ – but her head blocks the end. Conner captures the combustive state of this world without judgement, in images that are neither sanctimonious nor glorifying.
When Conner first shot these pictures, they were for Search and Destroy, a home-grown Bay Area punk magazine published by V. Vale (and funded in part by Allen Ginsberg and Lawrence Ferlinghetti), whose self-described editorial policy was ‘one of empowerment: “do it yourself/anyone can do it” – the Punk credo’. Reprinted and installed in a gallery, the photographs assume a tidy distance that feels vaguely nostalgic. Yet Conner’s style is revealed to be a bell-wether for what was to come – contemporary photography by artists such as Wolfgang Tillmans and Ryan McGinley, whose debt to his kind of approach is evident despite their dabbling in a type of ‘me-and-my-cool-friends’ aesthetic, which Conner’s always avoided.
Conner recently remarked: ‘I don’t think of pieces as having a beginning or end.’ By demarcating the photos temporally (half were printed in 1985 and half last summer), he suggests that printing and exhibiting are steps in the continuing exploration of processing images, each photo as much a fragment of a series as an independent work. The notion of fluid compositions dovetails nicely with Conner’s film LUKE (2004), shot on 8mm in 1967 during the filming of Cool Hand Luke. His friend Dennis Hopper had invited Conner to come along, and he began filming while riding to the outdoor set with the production crew. The slowed-down 22-minute film – it would last about two and a half minutes if it ran at the standard 24 frames per second – mostly concerns the behind-the-scenes action: cameramen, grips, waiting actors, prop handlers, electricians, etc. Conner shoots the preparations for the chain-gang sequence of the movie, showing the crew prepping a country road so it appears as if the actors are laying fresh tar. Heat rises from the pavement like mist, and the shirtless men glisten with sweat. Paul Newman, blond head and bronze torso, moves slowly through the frame like a demi-god. But rather than languish over these protracted erotic glimpses, Conner undercuts any sentimentality by jumping to a shot of a gaffer adjusting the boom, avoiding any aura of wistful nostalgia.
Many of Conner’s films play with time and measure (slowing the running speed to elongate each shot) and he did a lot of single-frame filming in Luke with the intention that it would be run at five frames per second. But without production money Conner ignored the footage for decades until approached by composer Peter Gleeson, who wanted to make a soundtrack. Ultimately produced digitally to lengthen each shot still further, it runs at three frames per second and screens like a genuine collaboration, Gleeson’s rich, sultry and plaintive electronic compositions perfectly matching the kind of endless summer day Conner captures on screen. The film is an exercise in protracted and suspended beauty, a rhapsody in honey-coloured frames.