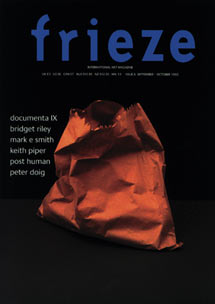 Bruise - Painting for the Nineties

Bruise was an exhibition complete with manifesto. Subtitled 'Painting for the Nineties', its organisers claimed to have isolated a new strain of British painting. The six artists could all be called abstract, and their work draws attention to the material properties of paint - whether dripped, splashed, stained or scraped. The catalogue went further, and used this vague kinship as evidence of a shared fascination - one with the circumscription of human life and action by material fragility and decay.

In case we should think that all this came straight out of the Book of Revelations, the organisers claimed that the artists in question 'see their paintings in some way as metaphors for the human body. There are strange internal workings (the behaviour of paint), external intrusions (the hand of the artist) and the possibility of chaos (the artist giving up control).' Divining an artistic movement on the basis of a shared metaphor is pushing it, particularly if the metaphor is as open ended as this one. The artists in Bruise, while individually interesting, combine the various factors of paint, gesture and chance in very different ways.

Of the six, Nicholas May and Joseph Mark Wright go much the furthest to reject the familiar range of painterly marks. In their application of paint the role of chance is elevated. May pours materials like bitumen and metal dust onto a hirizontal canvas, then tilts it so that the mixtures mix and glide. Wright applies a uniform ground, onto which a solvent is then splashed, redistributing the pigment into oddly cellular shapes. In these works the human hand is hardly emphasized at all, so that the viewer must look to the conceptual level to reveal the human presence.

In the case of Wright one is made aware mainly of a sequence of design decisions. Indeed, his pictures are reminiscent of cleverly treated photographs of natural micro-structures, as used by graphic designers to denote 'new age'. Nicholas May's work is also carefully designed but to more compelling effect. He employs uniform grounds of saturated blue to offset his metallic outbursts, and to create a spiritual ambience not unlike that achieved by Anish Kapoor with similar pure pigments. May's use of monumental scale and stately repetition also help to elevate his work to the level of the sublime allowing him to both imitate and take issue with the heroic statements of, for instance, Abstract Expressionism.

May's use of controlled accident, to create a paradoxical and self-reflexive beauty, relates him clearly to another pair of drippers -Ian Davenport and Callum Innes. This could not be said of the other painters in the exhibition. At forty-five, Kite was the oldest artist on show, and he seems to have a quite separate agenda. Kite is much less concerned with revealing a material proces on the surface of the canvas. His is a more direct approach: he emphasises the organic through a painterly evocation of the world of blood and synapses. It was Alison Turnball however who seemed most out of place. Her clean-edged art offers the least foothold to chance, reworking the geometric abreaction of Albers to little obvious end.

In the paintings of Mikey Cuddihy and Estelle Thompson the issue of chaos and intervention becomes relevant again. They too elevate process above individual expression, but Cuddihy and Thompson continue to explore the possibilities offered by paint for personal gesture. Cuddihy takes the smallest curlicue doodle and blowsit up onto a large canvas, revealing its vaginal shape. Stains, underdrawing and other subliminal traces are given prominence without pomposity. Their work reveals and revalues a range of forces, female desire to the decorative instinct.

It was Thompson's work which provided the most interesting counterpoint to May's. Her paintings are as intensely coloured and carefully structured as his, and an awareness of immanence - vague objects materialise within shimmering screens of paint, like crewmen in the Star Trek transporter. But where May produces grand narratives Thompson produces icons; where he ironises the sublime she recasts it; and where his paintings centre on a controlling concept, hers centre on controlled gesture - the Zen-disciplined single brushstroke which is at the heart of many of her pictures.

These six artists exhibited little coherence as a group, and they are too self-aware to be the neo-romantics that the catalogue clearly wanted, with all its talk of 'terrible beauty'. This wasn't 'Painting for the Nineties', but the show was still a bruiser.

EU Reviews , Exhibition Reviews
Laura Owens on What We Get Wrong about Van Gogh