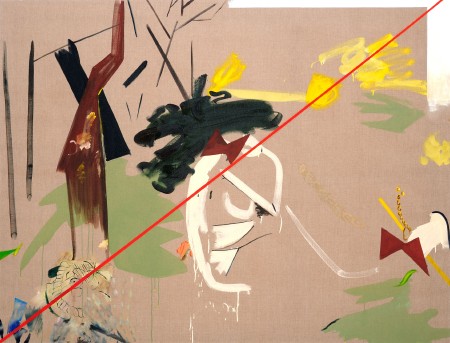 For Caragh Thuring’s first solo exhibition in New York she presented five canvases executed on un-primed linen. The paintings (all 2009) depict elements of pastoral scenes and are titled numerically – 1, 2, 3a, 3b, 4 – but neither were they hung chronologically nor did they invite a sequential read. Rather, the installation – and its title, ‘Assembly’ – invited viewers to make a collective interpretation; painted fields in one work were left empty in another, suggesting that the pieces were intended to complete or complement one another, like a yin and yang. I found myself trying to unify the group by skipping between the pictures and gathering the disparate parts into a mental whole.

Once pieced together, identifying Thuring’s source for the series – Édouard Manet’s Déjeuner sur l’herbe (The Lunch on the Grass, 1863) – came with relative ease for those familiar with the French Impressionist masterpiece. (An opaque essay-cum-press release on Titian’s The Pastoral Concert, c.1510, purportedly the referent for Manet’s work, drew the line of quotation back even further.) Thuring has relied on historical reference before, but if this show was an apt reflection of her work, she appears more interested in it as citation, like an epigraph, than as literal appropriation. Less clear is the logic or explanation for choosing Manet’s painting, an absence that feels mysterious, particularly in the context of the rich and provocative source.

Nevertheless, I was struck by the surefootedness of all the works, and the breezy way in which abstraction coexists with representation. The untouched linen and the watery washes of paint allow little room for correction, and Thuring is able to intuitively balance positive and negative space, colour and absence thereof. Her employment of signifiers to convey figures and landscapes (a cane, bow-ties, a ladder, a rope, a tendril) are concise and sparse, and yet weave together the loose narrative of these arboreal scenes in a rather Surrealist way. Only once, with a bunch of cherries, did this strategy feel forced.

A notable characteristic of Baroque painting is the strong diagonal structure used by artists to convey movement. This trait, which distinguishes the period from the classical and often triangular compositions of the Renaissance, reverberates in 1, in which Thuring laces a red stripe, corner to corner, across the picture plane. Bold with intent it suggested a contemporary redux of these forceful and dramatic compositions of the past. Also compelling was 4, a canvas I kept returning to. Dominated by large geometric swaths of earthen tones (green, yellow, grey, brown) the piece captures the figure of Manet’s nude rendered not as bodily flesh, but as whitewashed ghost. In pushing out the verdant landscape in which the figure sits, Thuring seemed to allow herself more leeway to search through the forms themselves. I found this a refreshing counterpoint to the delicate precision seen elsewhere.

Ultimately, these are paintings about painting, and Thuring has an engaging strategy for exploring image, structure and form. The fact that I found myself mentally drifting towards surprising artistic predecessors, among them Arshile Gorky, Laura Owens and Cy Twombly, likely reflects the challenge of moving beyond art-historical pastiche, and the appreciation that these are strong paintings worth puzzling over.