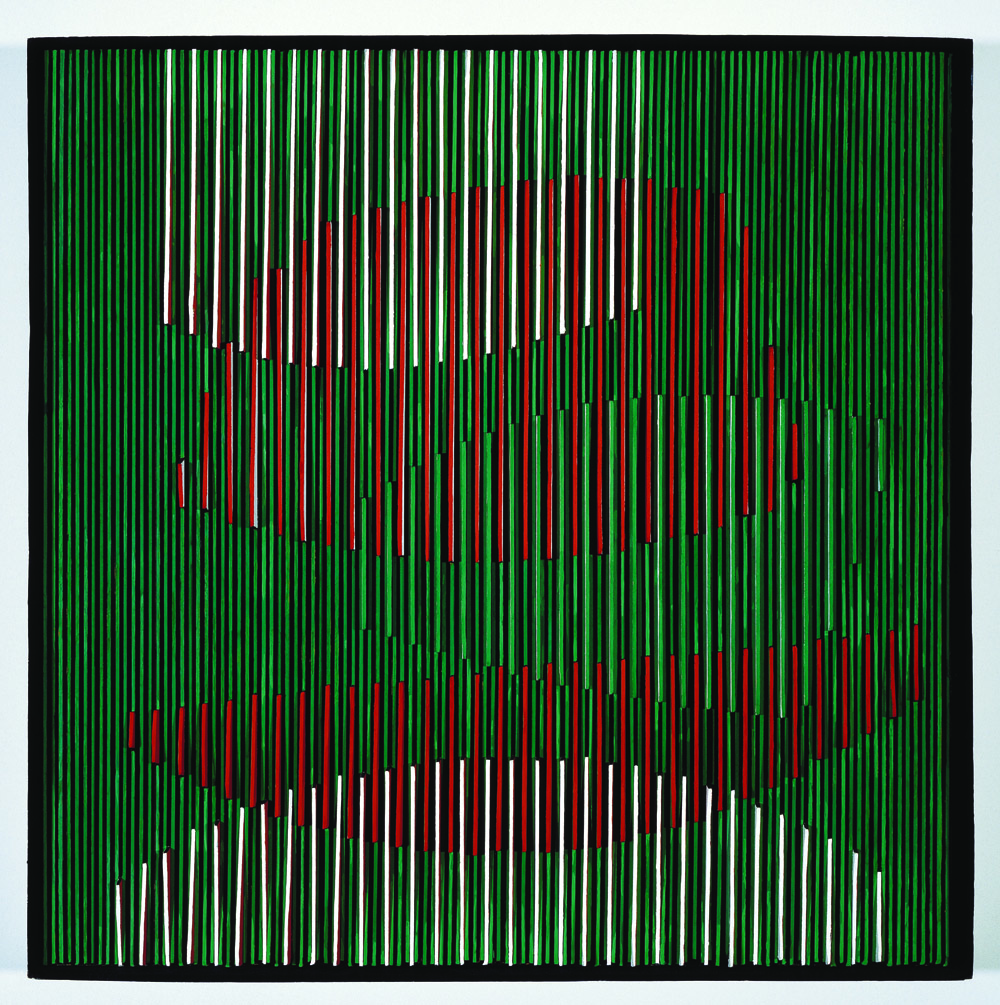 The ambition and intelligence of the Americas Society often stretches its modest gallery space: its tight survey of the early work of the Venezuelan kineticist Carlos Cruz-Díez was an example of this. The excellent catalogue made explicit some of the ideas that the few works on view were not able to do, but still one wanted more, not least because it’s rare to see kinetic art still looking so zesty and box-fresh.

Cruz-Díez emerged in the late 1940s as a Social Realist, but a search for what he considered a more ‘participatory aesthetic’ – one more suited to public art – led him towards Geometric Abstraction. Piet Mondrian was one influence, as is evident in Forms in Space (1957), a traditional canvas painted with a swath of coloured squares appearing to float over a white ground. But it was the work of artists such as Jesús Rafael Soto and Pol Bury that encouraged Physichromie no. 1 (1959), Cruz-Díez’ most significant breakthrough: a small, square tableau tightly striped with vertical bands of colour. From here it was a short step to begin using strips of cardboard to create broken surfaces with colour effects that shift in response to the viewer’s movement. In the 1960s he introduced organic motifs, producing Physichromie no. 174 (1965), a Matissean abstraction with a lyricism often absent from his work. And soon enough Cruz-Díez was producing the large-scale public works he had envisaged. Two works exemplified these: Physichromie no. 500, which he produced in 1970 for the Venice Biennale of that year, and which breaks up bands of painted colours with strips of red Perspex to establish a field of floating planes of colour; and a remake of his first Cromosaturación (1968), an installation of three empty rooms illuminated in red, blue and green.

All this was very vivid, and the catalogue blew the dust off some of Cruz-Díez’ jargon and motivations and rooted them once again in history. It sketched out Venezuela’s transition, in 1958, from a dictatorship to a democracy that sought to embrace European modernity, and it showed how, paralleling this, Cruz-Díez himself moved to Paris in the late 1950s. This was long ago, but the show’s guest curator, Estrellita Brodsky, framed the work with contemporary relevance, linking Cruz-Díez’ career to the work of present-day artists such as Olafur Eliasson: Cromosaturación made her argument powerfully. Instead of looking lost in history and riddled with theory, Cruz-Díez looked so robust that he made Eliasson look a little lightweight.