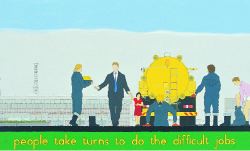 If Chad McCail's show had an opposite, it might be an exhibition of paintings by Robert Ryman or Ad Reinhardt. If their work is opaque and resistant to meaning, McCail's pictures play a very different game, closer to the didactic theatre of Brecht than any art for art's sake reticence. Deploying the simplicity of aeroplane safety instructions, McCail makes images that are more like a 'Beginner's Guide to the Frankfurt School' than an enactment of its political aesthetics. His friendly paintings even come with Ladybird book descriptions of the world they represent: 'people take turns to do the difficult jobs', 'wealth is shared', 'living things grow, regenerate and die'.

Paintings don't get much less ambiguous than this. McCail's explicit diptychs and triptychs, which depict life in a future society, seem curiously pat even by the standards of propaganda. They describe the moment just after a conflict has been re-contained in symbolic pacts: a landowner buries the key to his manor beneath a sapling, peacefully handing his estate over to tepee-dwelling insurgents; the jails are thrown open and prisoners set free; the supermarkets are converted into green-houses, and so on. The clothes, gestures and behaviour of these protagonists are carefully, even generously, detailed, but their faces are featureless. Consequently, they show no sign of emotion, as if psychology has been erased, or at least bracketed out.

Hanging above these panoramas of a benign new order, attached to the wall by bulldog clips, are three-tier, diagrammatic accounts of life both before and after the absent revolution. In these McCail's acknowledged debt to the theories of Wilhelm Reich become clear. The bad capitalist world of 'before' inhabits another order of representation, as well as existence. The human figure is skeletal or insect-like, its armature articulated by simple icons - cartoon hearts, internal volcanic reactors, and eyes that speak in daggers or chains of lovehearts. In pre-Revolutionary life the de-individualized individual is subject to a series of controls and repressions. The body is pent up within constraining bands that block and pervert libidinal flows, and each caste has its own mask - the patriarchs (plutocratic 'vampires' who live off the bureaucratic 'robots' who run the proletarian 'drones') have minatory chevrons for eyes, Ku Klux Klan hoods, and long brown cloaks that conceal even more rigorously mortified flesh.

These are McCail's most compelling images. Their narrative of subjection may be familiar from theory, sci-fi, film and fantasy, yet they still manage to be chilling. The horrors of life in a hierarchical regime are made explicit with an inventiveness that dispels the suspicion that McCail is simply playing a familiar 'bad art' joke. These pictures are neither a Simon Patterson-style toying with representational codes, nor a pastiche of a worn-out creed - they're too idiosyncratic, too invested and, for all their graphic reduction, betray too much surplus imagination.

The utopian tableaux, however, are harder to take. The cancelled faces and blandly tranquillized atmosphere of this new world may be informed by Reich's vision of dis-alienated labour, bodily freedom, polygamy and regular orgasms, but in this version of a free society even orgasms are 'relaxing' rather than convulsive. The pictures expose some rather cheesy, questionable political fantasies, although some people no doubt find these reveries affecting: Reclaim The Streets activists, International Third Position fascists and even Third Way neo-liberals all might relate to certain components of McCail's daydream nation. However, the more actively political the viewer is, the more problematic these avowedly 'political' images will seem.

The oddness of McCail's iconography, along with its troubling lacunae, focuses on the problems and politics of representation by allowing the viewer to wonder whether or not the situations and analyses he depicts are either viable or desirable. Perhaps these works are intended to upset both the reflex irony of the art world and complacent political dreaming. For all its serenity, McCail's installation raises some interesting and difficult questions, but they are questions that the work itself cannot answer. Why is the artist making avowedly 'informational' works - however ambiguous and self-disrupting - for galleries, or for galleries alone? And who said propaganda was politically desirable, anyway? Despite the new-found enthusiasm some curators have for the stridency of protest and the immediacy of the slogan, the polemical aspect of McCail's work is its least convincing feature. As political art his paintings are simultaneously sophisticated and naive, betraying - in both senses of the word - a great yearning, falsifying what they manifest.