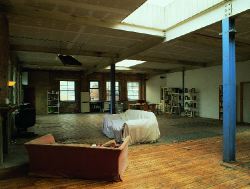 In a weird variation on Michael Landy's Break Down (2001), for which everything the artist owned was catalogued and then atomized, my possessions have just been replaced, but in a really gruesome, systematic way. Like the epochal Michael Leyner college novel My Cousin My Gastroenterologist (1990), where random judicial confiscation of personal effects becomes a widespread form of social control for wrongdoers, my things started to go missing unpredictably but unnervingly until it seemed as if I had no choice but to move out or crack-up. The reason for all of this was my willingness to become part of the predatory human research phenomenon known as 'Reality TV'. Since the Dutch broadcaster Veronica aired the first episode of Big Brother in 1999, the programme's format has been recreated in 22 countries, with viewing figures ranging from 20 to 60 percent. The Big Brother production company Endemol has got the best demographers and trend-spotters money can buy so when the call came to see if I'd be interested in having a Big Brother spin-off, Chains of Love, shot in my flat, it was time for a deep breath and a realisation that this was the Big One.

Thanks to the London Film Commission, my flat - which was converted from a down-on-its luck surgical instrument finishing factory two years ago - has seen the occasional pop promo, album cover session and TV stalker drama, but nothing could have prepared me for the condom-covered waterproof mikes in the shower and Beta-cam gantries over the sofa. The search for the next Reality TV sensation has claimed all manner of casualties, (busted relationships and terminally fucked careers, as the Fox network show Temptation Island has proved) but when it comes to your very own bathroom it's time to stop and take a look at just what the hell is going on.

Scheduled to be broadcast as Chained in the UK on digital E4 and Channel 4, Chains of Love features six participants (one picker and five suitors), who were chained together wrist and ankle 24 hours a day, and left to bathe, shower and sleep together in a 12 foot wide, fake fur-covered bed with a couple of infra red cameras overhead. One contestant was dropped each day to leave a couple, alone and restless, for the final two days. The chains moved from hetero (boy and five girls, girl and five boys), to a lesbian, and then a bisexual arrangement. Whereas Big Brother was hands-off, the Chained contestants turned out to be fairly high maintenance and demanded a fair amount of counselling. Tempers in the camera gallery flared. There was sex but how much will make it to TV is unclear.

To the conceptual art world this idea is unremarkable - artists Tom Marioni and Linda Montano, for example, were chained together for a year, but the difference here is the participants: 19-25 year old hard-bodies with the best titanium butts and washboard abs the circus training facilities of East London can provide. Whereas Big Brother set out to reflect what they thought we wanted to see (treacheries, flirting, distrust) Chained was a different kind of mirror: not the Stendhalian cartwheel and sky and puddle, but the glaucous, flourescent-tubed bathroom mirror in which the teenager primps, flexes and monitors his or her complexion. The clear objective of the show was for them to 'get it on'.

Usually there's a boilerplate contract for film location work, but for Chained even the contract negotiations were off-beat. The infamous Spanner case had made the notion of consensual assault inadmissible in cases of gay masochistic acts in Britain, so although a TV kidnap victim may consent to be chained up, it wouldn't prevent everyone else involved possibly facing an aiding and abetting charge. Once the indemnities were in place round-the-clock security became a feature of the neighbourhood, and I was moved to a safe house. However, with Mel from Big Brother as the presenter the odds were pretty good that the local kids would work out what was going on. She pretty soon became accustomed to jeers and hoots every time the 'chain gang' exited to their tinted-window Land Rover to go to the dog racing track, or a quiet dinner for six. Each contestant was given a substantial allowance for entertainment, and one option was to hang on to the money and use it for celebrating the happy coupling at the end of the week, when the picker and chosen suitor were united. The tight-wad option became more popular as the weeks went by and one couple was seen to disappear into a hotel in Prague with only the occasional SMS message bobbing to the surface as evidence of the emotional depth charge that had been set off deep in Hackney. While Chained has already been picked up by two US networks, the search for more spin-offs is intensifying. Endemol's The Big Diet is now underway in Germany, in which inhabitants of the familiar communal house, this time stacked with snacks, compete to lose weight. At the end of the series, contestants will win back in gold all the weight they've lost.