Big business, sculpture and the machinations of cultural production 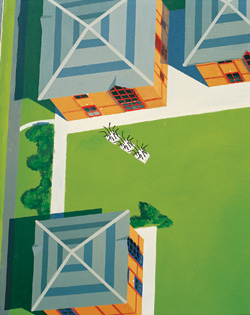 A long-forgotten stint at art school lurks in more people’s pasts than you might expect – an intervening year or so spent before realizing that there are more efficient, if less creative, ways of making a living. One wonders what effect such an (albeit brief) liberal arts education might have on the career of, say, a lawyer or a policeman? It’s an arbitrary question, perhaps, but one that artist Chris Evans has been investigating in his ongoing series ‘Cop Talk’, in which he arranges for members of the police force to go on recruitment drives around European art colleges – the first was held at Amsterdam’s Rietveld Art Academy in 2005 – hoping to highlight the possibility of an alternative vocation for those students who fail to pursue a career in the arts.

As much as the project is fuelled by an earnest belief in the benefits of a liberal arts education for all, and the need for more art-trained police officers, ‘Cop Talk’ is also an example of the way in which Evans seeks to establish himself as a cog – rather than a spanner – in the work that facilitates art’s production and distribution. His interventions are typically constructive, providing a space for the generation of ideas and the forging of social or working relationships between bureaucrats, corporations and other artists. In his year-long project UK Arts Board Agency (1999), for example, Evans inserted himself into the mechanisms that determine the funding of artists’ projects in order to examine what gets made, by whom and for whom. Inviting artists to submit a proposal for a project in need of funding by regional and national arts boards (the only stipulation being that the proposal had to relate to the theme of ‘trees’), Evans assumed the role of an administrative mediator, working the proposals into fully fledged applications and submitting them to various funding organizations. None of the suitably outlandish proposals was successful, but this was, perhaps, less Evans’ concern than untangling the knotty fiscal processes that bring creative ideas to fruition.

With the cat long out of the bag when it comes to the complicity between art and big business, Evans is less concerned with articulating a Hans Haacke-like critique of this wholesale merger than with the possibility of working within the framework it provides in order to examine the conflict of interests and power relations at play. In Gemini Sculpture Park (2000) and the Radical Loyalty project (2002–ongoing) he muddies himself in the mired terrain of corporate sculpture and the use of public art commissioning as a form of social and urban regeneration. The former project, funded by the Henry Moore Foundation, saw Evans establishing his deliberately commercial-sounding ‘UK Corporate Sculpture Consultancy’, a formal framework within which he approached several companies on the Gemini Park industrial estate outside Leeds to discuss what their requirements might be if they were to commission a piece of public sculpture to grace the entrance to their offices. The resultant designs, graphically visualized by Evans and artists Padraig Timoney, Toby Paterson and Graham Fagen, read as monuments to aesthetic compromise – a form of sculpture by numbers, duly produced at the service of corporate brand-improvement.

Evans plays a similarly consultative role in Radical Loyalty, the results of which he hopes will eventually come to fruition on a plot of land in the industrial town of Järvakandi in Estonia, bought by Evans in 2003 for the purpose of establishing a public sculpture park. Evans invited the managing directors of several international companies to consider what they would class as a radical form of loyalty. The directors’ creative efforts strained little at the leash of corporate ideology and fanciful aspiration, with proposals that addressed ‘the small things in life’ (Cliff Burrows, Starbucks UK) or ‘social sustainability and the prevention of climate change’ (Kari Vaiha, Sonera-Telia Telecom, Helsinki). In collaboration with the directors, Evans has produced visual representations of the proposals – delicate and unexpectedly beautiful tinted gravure drawings, which will eventually be realized as sculptures by a collective of artists formerly responsible for constructing Soviet-era monuments. The culminating sculpture park will become, for Evans, a staging ground for a battle between the ideologies embedded in Estonia’s lingering Communist past and the looming onslaught of global economics embodied by these corporate effigies.

As well as drawing attention to the machinations of systems of cultural production, Evans’ bureaucratic scenarios encourage participants to reconsider their personal roles in these networks of exchange. Self-reflection lies at the heart of Evans’ most recent project, Militant Bourgeois: An Existentialist Retreat (2006), in which artists were offered a stay at an ‘Existentialist Retreat’ in a far-from-savoury Portakabin located on an unused piece of land beneath Amsterdam’s orbital motorway. The only visually stimulating element in the sparsely furnished residence was a wood-burning stove, the design of which Evans delegated to Baron Jan Six, a wealthy patron of the arts and a descendant of the Jan Six immortalized by Rembrandt in a well-known portrait painted in 1654. Six’s hand in the supporting fabric of the retreat’s structure – particularly in the stove that provided its only source of comfort – functioned as a metaphor for the inextricable links between creativity and profit, shattering the optimistic ideal of autonomous creative enlightenment.