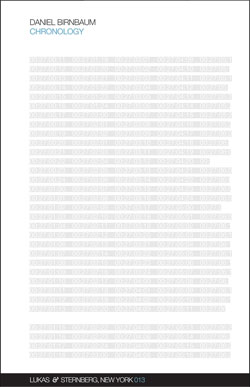 ‘It all starts with an ending, and then it ends again’, writes Daniel Birnbaum in his slim, expansive essay on the species of temporality extant in contemporary film and video art. If the sentence sounds Beckettian – and Samuel Beckett, after all, is one antecedent of much of what keeps us shuffling about in dimly lit black boxes and calling it art – it is to the extent that Birnbaum is interested in a certain inhuman unfolding of time, stripped of consoling metaphors. In the early works of Dan Graham, Bruce Nauman and Joan Jonas, and latterly in the art of Stan Douglas, Doug Aitken and Darren Almond, he discerns varying degrees of autonomy from traditional, subject-centred models of time. At the starkest extreme a work such as Aitken’s diamond sea (1997), which explores the post-human drosscape of a Namibian diamond mine, ‘can be read as a grandiose illustration of a return to the mechanical processes of the inorganic’.

Birnbaum’s philosophical starting-point is that ‘if one pursues the concept of time to its origin it ceases to display temporal properties’. It starts to look, in other words, more or less like one of the metaphors by which the mind tries to grasp past, future and fleeting present: a point, a line, a circle. They are all spatial, and the challenge (perhaps for film and video above any other art forms) is to avoid transmuting time only into space, into its own allegory. In Douglas’s Der Sandmann (The Sandman, 1995) – with its double projection of mocked-up Schrebergärten (garden allotments) in Potsdam, one flourishing and one having disappeared under post-1989 building work – the vertical seam that separates them is ‘a fissure in time’. Such works enact, rather than reflect, says Birnbaum, the condition of constant anachronism that is our contemporary experience of time.

Birnbaum’s notion of an art of unpredictable becoming is a compelling and sophisticated take on the common theme of Deleuzian immanence. But it has its aporias too. A brief aside à propos Matthew Barney – to the effect that his art is all meaning, all of the time – is quite telling. What Birnbaum resists is hermeneutics: work in which the topography of time is mapped with traditional instruments: metaphor, allegory, symbol. This would be, for example, the source of his partial rejection of Tacita Dean’s interest in obsolete technologies and resonant stories. But the problem – and it’s a problem for much Gilles Deleuze-inspired art writing – is that, as deconstruction taught a long time ago, hermeneutics have a habit of returning precisely when you think you’ve escaped meaning and metaphor for the clearer air of pure immanence. At that point few things look quite so quaint, and so full of familiar meaning, as ‘a new sense of time, a new chronology’.