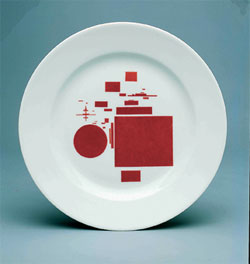 If, as Louis Althusser suggested, the future really does last a long time, then how better to secure longevity than by sealing important messages into recognizable forms that could easily endure? ‘Circling the Square’ is a peculiar exhibition, presenting as it does a solidified moment of revolutionary activity. The best pieces really do transcend their medium, while relying on the form’s very domesticity for their propagation and survival. In this, they pre-empt Stuart Pugh’s concept of ‘total design’, in which the creative and practical processes of production are a truly integrated experience.
Under the leadership of Sergei Chekhonin, St Petersburg’s Imperial Porcelain Factory (renamed the Lomonosov Porcelain Factory in 1925) recruited scores of artists, designers and artisans in the years following the 1917 revolution to create from stocks of blank porcelain new ceramic forms that would combine Agit-prop sensibilities with the Suprematists’ touch for deconstructed geometry to produce pro-revolutionary propaganda. This exhibition included a selection of 300 or so pieces from the factory’s own collection, covering a period from 1918 to the mid-1930s and ranging from the simply decorative to the insidiously sublime.
An excellent example of the spirit of the exhibition is Dish: Newspapers, a serving plate depicting a carefully chosen anthology of journals and newspapers in circulation in Petrograd in the early 1920s. Pravda (Truth), Trud (Labour), Krasny komandir (Red Commander) and Zhizn iskusstva (The Life of Art), configured in a swirling Busby Berkeley-style flurry, are drawn in such tiny detail as to include the design, titles, banner headlines and price of each publication. It forms a lasting record of a city’s reading habits at a given epoch, graphically demonstrating the message from another plate on show, that ‘Without books there is no knowledge’.
Two of the most astonishing and assured pieces in the show date from 1930. Vase with Battle Scenes and Lyudmila Protopopova’s Service No.5 (Industrial). The tall white vase is decorated with four vignettes of battles, meticulously representing an explosion, advancing cavalry, two soldiers with binoculars beside a blasting tank and a sky full of biplanes. Attempting to transform a familiar form into a piece of radical history, the piece throws up questions about its own function and usage. What could you put in such a vase? What contents would be equal to, or rather fit for, such a container? The somewhat traditionally formed Service No.5 tea set conflates style and political content in a peculiar yet satisfying way. The Suprematists considered the colour white, and therefore white porcelain, to be an ideal base because it expressed weightlessness. This radical potential is graphically displayed in this service, where disembodied pylons, cranes, chains and hoists float around and even off the picture plane, suggesting that their symbolic life is not restricted or even dependent on their porcelain hosts.
P. Novitski’s hope that ‘with the methods of applied art we will bring about the active ideological class war, we will renew life, increase the quality of industrial production and improve the taste of the working classes’ was not a reality for the work produced in the Lomonosov Factory. The labour-intensive production process meant that the works were too expensive for ordinary people to afford, so over 90 per cent of its output was exported to foreign markets in cities such as London, Paris, Stockholm and Venice. The obvious strategic purpose of this was that the political messages fired into their surfaces were easily transportable, meaning that Lenin’s pro-revolutionary propaganda reached a potential audience that was international rather than just domestic. This is the real value of ‘Circling the Square’ – its biscuit plates, cups, saucers, milk jugs and vases combine to form not mere dinner services or tea sets but rather, as Julia Kristeva might have it, an active socio-cultural ensemble.