21st-century museum buildings are more than repositories of art; they also function as centres of urban activity and symbols of cultural regeneration 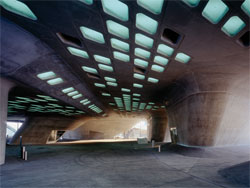 Towards the end of the last century major cultural institutions established themselves as generators of urban activity rather than just repositories for artefacts and information. Architecture is central to this role. As the new century progresses, the architecture of high culture is evolving still further, and a new museum now carries with it the weight of cultural expectation, anticipated by both critics and town planners as a potent symbol of place, be it a district, city or even a whole country.

Iconic monumentalism was a reaction against the anodyne Modernism that had become the de facto house style of museology. Sober, self-effacing, functional museum architecture stems from the Bauhaus-era fascination with purity and simplicity. The gradual reduction of the decorated façade into a muted, abstract composition took place in parallel with the most significant American art movement of the postwar era, Abstract Expressionism, an integration epitomized by Philip Johnson’s Rothko Chapel in Houston (1971), a self-consciously pared-down structure built to house a Mark Rothko triptych. Art overflowed the constraints of the canvas; architecture followed meekly.

Johnson’s self-conscious dullness was the nadir of Modernist un-invention. In many works from the era – Marcel Breuer’s looming, insular Whitney Museum of American Art (1966) or Mies van der Rohe’s Neue Nationalgalerie in Berlin (1968) or his addition at Houston’s Museum of Fine Arts (1974) – architecture had almost entirely ceased to embody any kind of narrative or structure; it was simply a vessel for holding art. In Paris, Richard Rogers and Renzo Piano’s Pompidou Centre (inspired in part by the paper fantasies of Cedric Price and Archigram in the 1960s) reopened the debate about the role a dynamic physical environment could play in artistic perception, the start of a process that culminated with Frank Gehry’s Bilbao Guggenheim, a building that revealed – perhaps unintentionally – how architectural aesthetics could shape and inform content.

Enter the iconic age. The Bilbao Guggenheim was initially extolled as a triumphant physical manifestation of digital processes. The museum’s lasting legacy was to identify an apparent correlation between a building’s physical appearance and the fortunes of its location; a dramatic, curvy structure for an exuberant, revitalized city. Icons will always exist; the cultural perception of the building as object – rather than a functional series of spaces – now forms the primary way of interpreting architecture. For museums this has meant an inevitable diversion from the collection towards place and activity. The proposal from the Office for Metropolitan Architecture (OMA) for Museum Plaza in Louisville, Kentucky, is designed explicitly to attract attention. ‘Ever since we saw the Guggenheim Museum in Bilbao, Spain, we’ve asked why not in Louisville’1, said Steve Wilson, one of the project’s investors. OMA’s cascading tumble of ostensibly conventional slab blocks uses both the International Style aesthetic of Chicago’s John Hancock Center and Sears Tower, with its comfortingly visible structural elements, and the deconstructed, ‘collapsed’ style popularized by Daniel Libeskind. It is a visual mnemonic to Modernism and iconism, both homage and pastiche.

Perhaps in response to the apparent architectural excesses of the New Iconic Museum, the past decade has seen several notable attempts at what might be called dramatic pragmatism, the combination of material and textural restraint with the traditional free planning and spatial exaggeration offered by a museum programme. Caruso St John’s New Art Gallery, Walsall (2000), Lewis Glucksman Gallery, Cork (2004), by architects O’Donnell + Tuomey, and even Herzog & de Meuron’s Tate Modern (2000) all suggest visual subservience to curatorial demands yet remain alert to the need for strong media positioning. Without an overtly iconic building cultural institutions need a multifaceted commercial approach that embraces multiple retail and concession spaces and branding opportunities. Yoshio Taniguchi’s extension and reorganization of New York’s Museum of Modern Art’s chaotic site represents the apogee of the fetish for expansive interiors. MoMA is alive with movement, fulfilling the commercial imperative for increased visitors yet paradoxically destroying the much-vaunted serenity of the internal spaces.
New pragmatic architecture has also temporarily grounded the lightness and evasiveness of the ‘iconic’ form. Zaha Hadid Architects’ Phaeno Science Centre in Wolfsburg, Germany (2005), is an explicitly solid, weighty object. No matter that the displays appear almost peripheral to the building, which focuses on an empty concrete undercroft, a new public space raised up on angled columns. Hadid’s buildings undergo a transformation from ethereal, jagged whimsy on the page to authentically robust concrete reality, with texture and surface playing a central role. Hufnagel Pütz Rafaelian’s Museum der Bildenden Künste in Leipzig offers a similarly pugnacious presence. The gallery existed in an unfinished state for many months, its rectangular box form inlaid with large expanses of glass that reveal a brightly illuminated interior of wood and concrete, an unvarnished jewel case.

The great concrete architecture of the immediate postwar era conveyed a quiet monumentality; it was not openly scornful on the Modernist fascination with ‘transparency’. Solidity implied permanence and consistency: authenticity. But transparency remains an obsession of architectural culture, a word that’s also charged with social and political meaning. In museology transparency is not so useful. Architectural exuberance is more likely to be tempered by the permanence of solidity, or even the mystery of translucency, a quiet reversal of the perpetual revolution once promised by digital processes. David Chipperfield’s Figge Art Museum (2005) appears, at first sight, to be transparent yet deliberately sabotages the conceit by layering its glass façade with an inner skin of perforated metal. Álvaro Siza’s first major Brazilian building, the Fundação Iberê Camargo (2006), explodes the gallery’s inner workings. Tucked into a wedge-shaped site between a hillside and a lakeside highway in Porto Alegre, it is enveloped by winding concrete external ramps that sprout from the main body of the building, removing circulation away from the heart of the structure. These ramps are plastic and organic in form yet also faithful to Siza’s palette of sunlit, abstract forms.

Herzog & de Meuron’s Schaulager in Basel (an art storage facility for The Emanuel Hoffmann Foundation) is a compact, dense structure. Designed to house art works at a far greater density than in a gallery context, the polygon-shaped Schaulager appears as if carved from the surrounding earth. The impermeable appearance of the monumental walls is subverted by ‘jack-hammered’ strips of fenestration, their jagged edges apparently ripping into the thick walls while in fact being carefully – and digitally – contrived. The entrance façade develops this inversion further, indenting the walls and replacing the rough texture with the smooth whiteness of the conventional gallery, folded up at the sloping base to provide access (a development of Tate Modern’s entrance ramp). A ‘gatehouse’ structure encloses the new public space. Inside, the aesthetic is that of an art fair, demountable and flexible. Both projects subvert expectations, mindful of the shifting values attached to cultural architecture. Such inversions serve as a metaphor for the future museum, a structure demanding both attention and insularity, often in the same breath.

Jonathan Bell is contributing architecture editor at Wallpaper* magazine. He also writes about product, graphic and automotive design and is the author of the forthcoming book 21st Century House (Laurence King, London).