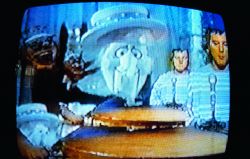 Chicago is one of several cities in the US required by franchise agreements or state law to provide public access to designated cable channels - the ones most subscribers tend to avoid. Amid the homework emergency hotlines, in-studio stepper's balls, adoption process discussions and the kind of endearing narcissism celebrated in Wayne's World, an occasional show emerges that is pertinent to a broader discussion of contemporary culture.

Cool Clown Ground has been aired at 10 pm on Sunday nights for the last seven years. It mainly comprises members of the band Cheer Accident, whose prog-rock riffs, reminiscent of mid-1970s King Crimson sans cloying strings, are featured in the title and end sequence. Other participants, acquaintances or colleagues of producer Fred Krueger (apparently his real name) sometimes star in an episode and then vanish. Performers loiter in the empty studio like Samuel Beckett's Vladimir and Estragon in a theatre of the absurd where actions are stripped of meaning; drummer Thymme Jones shakes a maraca for the entire half-hour; 'Harrison Cycle Smithy' (Dylan Posa) talks to no-one in particular about his McDonalds Fish Sandwich; passers-by are challenged to a race without prizes up the Elks Memorial steps on Diversey. Neither hairstyles nor clothing indicates any particular year or season, and spoken language is assumed to be an inadequate interface for real communication. Three general categories prevail: the in-studio improvisation, the street interview and the live call-in. The latter is the most consistently compelling.

'Who's the Pretty Girl then?' attracts the most hostile callers. On screen along with the number to call is a bottom-lit, close-up of Thymme Jones' half-shaven face. He repeatedly insists, in a deep, slow monotone, that callers declare him 'the pretty girl'. It's a reversal of prank phone calls, one in which the callee maintains the upper hand. Jones maintains his subjectivity, while the disembodied off-screen voices become his anonymous, dehumanized victims. From the safety of their living room, callers make futile attempts to pierce the performer's act with insults or jokes. The despair of defeat sticks to them like glue, while their insults and giggles form a backdrop of repeated motifs to Jones' obsession.

Tony Young is a pop music expert who resembles Billy Dee Williams with a missing front tooth. He generously shares his vast categorical knowledge with charm and sincerity. Pretty straightforward, really, but as he answers one question after another, his expertise begins to recall a vaudeville performer who devotes his entire life to a single act. Young appears on Cool Clown Ground like an autistic information machine, and it is in his show that the intervals of emptiness are most terrifying, as if you had glimpsed your own pending entropy, discontinuity and death. As you struggle to comprehend the muffled questions coming through the studio intercom, the action and variety of sitcoms, news bulletins, films, cartoons and the multitude of other narratives available on other stations beckon.

The humble revolutions, Zen theatre and transient nature of community access television could have been made for Fluxus. Like the final act in historic vaudeville, referred to as the 'dumb show', in which a handful of the show's lesser performers would enact silent, fragmented spectacles in preparation for the next show as the audience began to pour out, Cool Clown Ground does a weekly pantomime to gain your fleeting attention.

If the alleged death of tragedy is due to the plethora of post-Modern irony crystallized in the works of Beckett (who himself borrowed from vaudeville), then Cool Clown Ground and shows like it gush into the low points of our withering faith and teach us to weep again. We suffer but do not perish because the hope that these idiots will resume their stream-of-consciousness shenanigans prevails. Cool Clown Ground serves the community by absorbing, and then reflecting back, its absurdity. They're killin' me, if only momentarily.