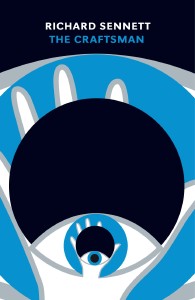 The guiding intuition for this study of the current meaning of craft, writes the sociologist Richard Sennett at the outset, is the proposition that ‘making is thinking’. The dictum is provocative: ‘craft’ today tends to denote either an antique, buffed aestheticism or a frankly amateur, cobbled finish – the word applies as readily to the vacant niceties of John Updike’s prose as to the act of fashioning, say, a plausible hedgehog out of a dried thistle-head. Art, literature, music, material culture in general: all have moved beyond the slow seductions of technique towards other models of being and doing. Process, concept, reproduction and relation are the stakes of the art of the past century, while in everyday life few of us have the patience or skill to produce craft-fair gewgaws, never mind exquisite syntactic ornaments. Craft exists only as nostalgic luxury or eccentric aberration.

Such, at least, is one narrative of the contemporary irrelevance of craft to both economic base and cultural superstructure. Sennett’s ambitious and digressive book acknowledges a certain decline in the centrality of craft to art and industry alike, but it refuses for the most part the consolations of nostalgia. His concept of craft is, rather, an open-ended and accretive process, opposed to both introvert logic and immovable routine. He finds it in some of the expected historical places – the skills learnt in the medieval guild, the minute adjustments of the hand required of classical musicians – but also in the dispersed community of Linux programmers, in the recipes of Elizabeth David and in the architecture of Frank Gehry. What Sennett’s many examples have in common is the capacity to submit to repetition and at the same time respond to tiny changes in circumstance and opportunity: homo laborans turns out to be just as creative (a word Sennett avoids for its Romantic valence) as homo faber.

At times, though, the book reads like an amalgam of John Ruskin’s more pious odes to pre-industrial labour and the lexicon of managerial self-help. If all the complexities that Sennett sketches come down, in conclusion, to ‘taking pride in one’s work’, then this is frankly not much of a model for cultural restoration, let alone transformation, let alone revolution. Not that that is exactly what Sennett is after: he seems content to glean and repeat some sage advice about how to get on with things but not try too hard. In the end, The Craftsman cannot really deliver on its promise of a contemporary defence of the idea (or the practice) of craft because, despite its wealth of historical anecdote, it has little real sense of history: of how and why the undoubted fulfilments it describes are denied to so many. Oddest of all, Sennett’s is an argument about craft that manages to say next to nothing about visual art, which has been for some time the space in which the dialectic of tradition and experiment has seemed most charged. The omission is almost as infuriating as the book’s decidedly un-crafty profusion of typos.