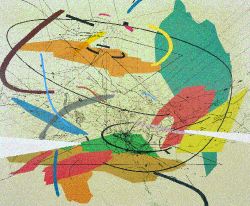 'Every generation must build its own city' proclaimed Futurist architect Antonio St Elia in 1914. As the most cursory experience of urban megalopolises of the past 20 years, such as the Washington-New-York-Boston corridor and the Pearl River Delta, can attest, this cry from sleepy, timeless Milan, has, for the most part, come true. Reflecting the nihilism of his war-crazed set, St Elia had no regrets for the historical artifacts that must necessarily be sacrificed to make a new go of it every two decades or so; he called preservation 'embalming', and demolition 'beneficial'. But in our time of rapid, massive-scale renovations and constructions, the notion that each new innovation is in fact, a development, has an old fashioned, even naive ring to it. Today, the 20th-century fascination with the future has given way to a fascination with all forms of 20th-century futurisms, their odd mix of advanced engineering and obsolescence evinced in everything from leisurewear made from space-age materials but unmistakably modelled on the costumes of space travellers from mid-century science fiction films, to sculptures that mimic 'functional' Modernist furniture design, but are not meant to be used. With their crumbling ruins cheek by jowl with recently constructed neo-Classical palaces and glass and steel quotations of 1930s Modernism, the contemporary urbanscapes of, say, New York, London, or Mexico City are examples on an enormous scale of this kind of perpetual temporal adulteration, in which the archaic cohabits with the futuristic. Catalogues of possible forms, none of which ever disappear, but rather constantly morph in reaction to circumstance and to one another, the contemporary city is simultaneously in evolution and devolution; always changing, but never coalescing into a whole.

What does a city in motion look like? Julie Mehretu's overlays of directional marks and vectors, isometric drawings and cross sections, floor plans, and aerial maps offer one view. Her canvases are wild with activity, and, thanks to an ingenious method she has devised for layering her varied marks, they resemble the vellum overlays of an architectural drawing but are actually created from thin sheets of acrylic sprayed on to the canvas with an airbrush. Brightly coloured lines shoot across the picture like comets, directional lines of force that disappear off the edge of the canvas or end in little coloured explosions. Directly behind these animated ribbons, in what can only be described as a small sliver of vertical space between the surface of the picture and its background, architectural elevations, office buildings and amphitheatres, colonnaded passages, and grand stairwells, are set in jaunty perspective, some obedient to the horizon line, others almost perpendicular to it. Drawn so delicately that their presence does not so much demarcate space but convey its essence, these spirit structures and streets are themselves contained in a larger architecture, often a room in deep perspective. That a room could contain a city, which in turn might contain another room, and it, another city, ad infinitum, confounds set notions of interior and exterior and skews any sense of scale that has not already been annihilated by the grand swings between aerial and ant's eye view. Added to this spatial destabilisation is the peculiar collapse of past and present that is the effect of Mehretu's transparent strata. Recalling an architect's presentation of the development of a project, her layering of images allow us to travel through time, encountering, for example, the stairs from the Laurentian library, which lead down the runway of a high Modernist airport and through the arches of a shopping mall designed to resemble a Renaissance loggia. In a similar manner to the way current architectural theory perceives urban spaces as ever-morphing and interlinked, all these images exist in Mehretu's work simultaneously.

For St Elia, because we are defined by the structures that we have built, our cities must necessarily be a contemporaneous and faithful projection of those who live in them. Mehretu admits that she has incorporated architecture from her own experience of living in Ethiopia, Michigan, Texas, and Brooklyn, but she calls her works 'story maps of no location'. It is possible to recognise an architectural image here and there - a Florentine church, her childhood home in East Lansing - but the bulk of her images are inspired by generic institutional structures: malls, airports, stadiums, found in any city, at any time over the last 50 years. These modular elements team with incident - storms of angry marks that swirl around in tornado formation, as well as other forms of turbulence. In recent works, conflagrations blaze, and puffs of pencil smoke bellow forth between coloured detonations and hails of bullet-like shapes. Amidst this chaos, weaving amongst the missiles and the architecture, are small infantries of organic shapes. The artist has described these characters as symbols of different populations that are deployed in manners appropriate to their shape and to their circumstances. Some resemble victorious armies, privy to every level of the city/canvas, which spread unchecked, invading other clusters of shapes and overrunning them. Other symbols seem enslaved, huddling in close groups, penned in by spiky orthogonals or marshalled into lines that mimic the architecture surrounding them. The presence of these 'characters', anthropomorphic but unspecific, at first seem like possible clues to a narrative, or perhaps even a geographic location, but ultimately, they are markers of dislocation. Whether figured as persecutors or refugees, their stories are as geographically and temporally unmoored as the sports complexes and train stations that surround them.

Mehretu's maps do not depict a specific place, or even, for that matter, a composite of places. Rather, they are hybrids of all those cities that we have inculcated, whether by actual contact or by second-hand experience through television, film or books, as well as hybrids of all of those cities we have yet to absorb. Offering an inspired illustration of the fact that ours is an era of temporal and spatial relativism, in which selective grazing from other periods enables us to construct a contemporary reality as dynamic as any dreamed of by the Futurists, Mehretu's work fulfils St Elia's dream of a city that would serve as a credible reflection of contemporary life.

To paraphrase the great philosopher of cities, Italo Calvino, a city, by its very nature, does not tell its past, but contains it, and thus exists as a repository of memories; a sponge that soaks them up and is, in turn, shaped by them. Futurists like St Elia saw a danger in the drag of memory, and thus dreamt of annihilating it once and for all by rebuilding cities from scratch. Our age recognises that history is permanent, and so we have grown to accept our memories, even embrace them. Mehretu has succeeded in expressing the extraordinary speed of urban change, both constructive and excavatory, by her decision to paint. Painting (and drawing) appears, at worst, an anachronistic choice with which to record temporal and spatial simultaneity, akin to the Futurists' artless selection of a bucking horse rather than a turbine to symbolise kinetic energy. At best, in comparison to film, video, and computer imaging, it might seem an inefficient recorder of movement in space and time. In fact, Mehretu's eloquent canvases, in which each touch is virtually indelible, in which each figure is new but has inscribed in it a reference to an earlier figure upon which it is superimposed, are lush and evocative metaphors for the creation of the contemporary urban landscape. In her layered collections of structures and plans, arrows and lines of force, Mehretu - like Calvino - does not simply depict the metropolises of yesterday, today and tomorrow, but rather contains them within the canvas, re-enacting the process by which they come in to being.