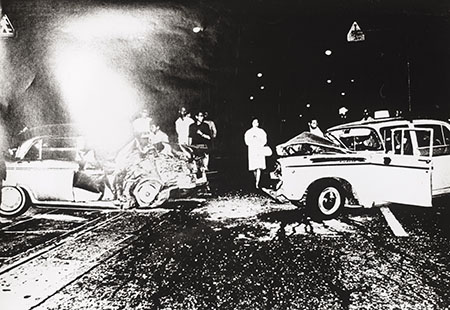 Japanese photographer Daidō Moriyama has long had a thing for taking photographs from moving vehicles, and ‘On the Road’, his exhaustive hometown retrospective at the National Museum of Art, was like a high-speed car journey, racing through the dark nights and grimy streets depicted in his work. Since he moved to Tokyo to work as an assistant to Eikoh Hosoe in 1961, and started, as he puts it, ‘snapping photographs like the quick-fire of a machine gun’, Moriyama’s principal subject has been the seamier side of urban life in Japan. Mostly shot in black and white, and made into grainy, extreme high-contrast prints that look as if they’ve been peeled from the dirty, rain-lashed alleyways, subway trains and dive bars depicted in the images themselves, at first glance Moriyama’s photographs seem to be the epitome of noir-ish cool. Exhibited here in sepulchral dark rooms, the rowsof photographs spot-lit as if in an identity parade, Moriyama’s images of the back streets around the American naval base at Yokosuka and Tokyo’s Shinjuku district, looklike they could be stills from Japanese classics such as Seijun Suzuki’s Branded to Kill (1967) or Toshio Matsumoto’s portrayal of Tokyo’s gay demi-monde in Funeral Parade of Roses (1969) – a world of sleaze, gangsters, sex, trashy pop culture and intimations of violence. With their seemingly effortless shoot-from-the-hip insouciance, certain Moriyama images seem to prefigure by more than 20 years much of the grungy fashion photography of the 1990s and early 2000s, and certainly blow out of the water the work of self-celebrating style snappers such as Terry Richardson. But closer inspection shows Moriyama to have also had an eye for the bigger picture of a changing Japan and the swirling currents of life in its postwar industrializing cities, which affected everyone from salarymen to fashion models, from artists to the elderly, from young couples buying their first homes to down-and-outs eking through each day.

‘On the Road’ gave visitors a wealth of stark imagery that spanned Moriyama’s five-decade career, from the 1960s right through to his most recent work examining the consumer landscape of Shinjuku. Our drive-by tour through Moriyama’s practice took us past Stray Dog (1970), a photograph of anger, threat and fear coiled up inside the mottled fur body of a half-starved animal, and the disturbing Yokosuka (1970), which depicts a young woman running barefoot through the rubble of an alleyway, apparently after an incident involving local military personnel. Caught in the split-second glare of Moriyama’s camera flash, the woman’s white dress is in sharp contrast against the pitch-black night she’s running into, seeming to suggest there is refuge in the shadows. The sharp angle at which he has framed the image makes her body look almost as if it’s plunging downwards into a black hole rather than running away. (Enigmatically, this photograph was also exhibited in a colour version in ‘On the Road’.) In A Castle for Two: One Bedroom Apartment (1967), we see a young couple taking in the view of a bleak housing estate, one in which we might guess they’ve recently bought their first home, while in Platform (1977) there are crowds making the daily commute into work. I would hazard a guess that these commuters didn’t include colourful characters such as Moriyama’s Itinerant Actor (1966) or the Cleopatra-esque modelin Medicine is Art (1967).

A room of colour photographs gave a brief respite from much of the work’s abyssal blacks and high-wattage whites. The fallen cherry blossoms of Izu (1982/93), the pinkish hues of an open window in Ominato (1974) and coloured street lights in Ishinomaki (1969/97) were amongst the exhibition’s gentler notes – moments of stillness strongly reminiscent of William Eggleston in their treatment of colour, suggesting that the two photographers may have been working to a common purpose at certain points in their career. However, the view through the windscreen of a speeding car in Tomei Expressway (c.1968) is perhaps far more emblematic of Moriyama’s half-century-long project to record life head-on, in all its raw, ugly beauty.