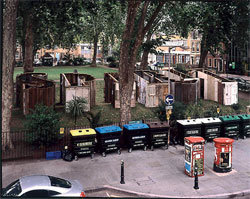 For his ‘Inside the White Cube’ show Damián Ortega worked outside and constructed six large structures from discarded building materials, arranging them in a line along the south side of the park in Hoxton Square, which is opposite the gallery. As I entered the first structure, with its walls rising well above my head, its raw, grim materiality made an immediate impact. This was sculpture you could touch – though I didn’t really want to. Many sections were rusty corrugated iron. Some were defunct advertising boards, on which painted signs were still legible. (Rather appropriately one read, ‘J. R. MARTIN TIMBER BRICKS SLATES’.) There were slats that perhaps had formerly boarded up high-street shop windows, now covered with the torn remains of fly-posters, other random fragments of former buildings and lots of peeling paint. More and more stuff, old and dirty. It was as if Dan Graham had got Mike Nelson to build his pavilions.
Some of the walls were made of disused doors, but these could not be opened. Instead, you moved from one labyrinthine structure to the next through gaps cut out from the panels. You could also move about within each structure, and this was kind of scary – you didn’t know what lay around each twist of wall. In the first unit the walls curved into small narrowing spirals whose centres I couldn’t quite penetrate; the body of the third was a central corridor with two tight spaces at each of its ends, again just too tight to fit into. I could not help thinking of the phenomenological adventures of Richard Serra’s Torqued Ellipses (1997) but mainly because of the difference: the shape of Ortega’s structures seemed too deliberate, not quite abstract. It felt like there was some kind of motivation for the way these nooks and spirals were arranged. So what was it? Walking in the structures, I was permitted a view from ground level only, but what would these structures look like from above? The penny dropped – each structure was the shape of a letter, and the six letters together spelt out a word. It took some minutes to work it out … S, P, I … Spirit.
But of course: Ortega’s exhibition was titled ‘Spirit and Matter’, and the press release had explained it was a work of two parts, the other being inside the gallery. And so I returned inside the White Cube and walked up to Ortega’s designated showing space on the first floor. He had left this room completely empty, but the window offered the perfect view over the square, and now the structure was easily legible. You could also see from here that Ortega had chosen an elegant serif font – perhaps to slow down the process of word recognition within the work, or perhaps to crank up the disparity between the appearance of the word from within and above. Gazing on all this stuff from the ethereal emptiness of the space, you realized that, rather economically, Ortega had separated out two aspects of the encounter we have with sculptural works – looking and moving. But his work united as it divided – Ortega made matter spell spirit. In the empty gallery, with the space to think, you realized that one of the reasons this sculptural oxymoron was so odd was that, at least in the context of 20th-century art-critical discourse, these two terms have usually been kept well apart.
Marcel Duchamp vs. Piet Mondrian; Robert Rauschenberg vs. Mark Rothko; Robert Morris vs. James Turrell; Vito Acconci vs. Bill Viola. These hasty oppositions could be unpicked, but you get the point – artists have immersed themselves in materials or spoken of the spiritual but rarely brought these two languages together. From the vantage point of our sceptical, secular age the spiritual discourse seems more and more absurd, kitschy and religious at once. But maybe not for Ortega …
There are various precedents in his work for this project. In 1996 he made a series of photographs in each of which appeared paired objects, joined because they were homonyms. Some time later he photographed a modular construction built with tortilla chips. In 2002 he built a mini-Modernist estate, which from above spelt out the word Acción (Action). In 2003 he constructed a labyrinth to house a group show he curated, called Elephant Juice (O Sexo Entre Amigos). For some time Ortega has been bringing together objects and language, words and buildings, mazes and displays. Meanwhile the rhetoric of spirit appeared in the title of his most famous work to date – the Volkswagen Beetle he disassembled and hung like a mobile. By revealing every nut and bolt, emphasizing rather than denying the car’s materiality, Ortega made of the humdrum vehicle a Cosmic Thing (2002). Perhaps ‘Spirit and Matter’ represented a condensation of his entire oeuvre.
Some art works lose their appeal once you ‘get’ them, but after looking down on the letters there was still the urge to walk through the sculpture once more. Returning to it, Ortega’s linguistic labyrinth was no less captivating. During this second trip I looked south between the letter structures and noticed Norman Foster’s Swiss Re Tower (2004), now known to Londoners as ‘The Gherkin’. With this new gleaming glass building as a backdrop, Ortega’s materials took on a cruder and more resistant appearance. Thinking of the work less in terms of sculptural history and more for its suggestion of recycled architecture, I remembered that if spirit and matter are rarely married in art criticism, they more often come together in environmental discourse. Many eco-warriors, passionate about recycling the dwindling materials of the world, describe their activities in spiritual terms. Ortega’s isn’t the world of eco-warriors, but his work does point to the value of the use of reclaimed matter. We should not see all this as ironic: perhaps a really spirited art can be engrained in the refuse of our urban worlds.