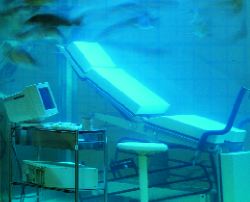 How do we measure the relative intelligence of, say, Robert Smithson, Ashley Bickerton and Damien Hirst - three very distinct sensibilities from three separate generations, each working in media they've subsequently claimed as their own? Who of the three is smarter? The answer, after practically no deliberation at all, is that they're all geniuses at being who they are. Only with Hirst it's somehow more so; less a question of mastery than the squared results of amplification multiplied by ambition. But there's that word: ambition. It crops up in everything about the artist, from short, mythologizing blurbs in local entertainment guides to celebrity profiles in Vanity Fair. And yet, are we talking about the ambition of Damien Hirst Inc., the one- man pharmaceutical entrepreneur, giving druggists a run for their money by handcrafting 8,000 injection moulded pills in fruit-flavoured colours and arraying them on gleaming metal shelves, or Dr. Hirst, Gothic dead ringer for a Cronenbergian gynaecologist carrying out experiments seemingly staged by P. T. Barnum and scripted by Jack the Ripper? Both and neither.

Let's start with who and what you see in the street: perhaps the hipster with the ten-gallon Stetson and the camouflage cargo pants walking his little dog, or the gangster's moll in fishnet stockings and a fez, smartly accessorized with leopard print Nehru jacket and a patent leather purse. Is this patchwork Surrealism, mix 'n' match Dada? Now fade to the centre of Gagosian's huge new space in Chelsea and Hirst's recent show 'Theories, Models, Methods, Approaches, Assumptions, Results, and Findings'. Surrounding you was a wallpaper network of intersecting pale blue lines, faint as an embossed napkin, with the phrases 'Math Systems', and 'Graphics Grid' providing a kind of 'hooked on phonics' pre-school set of captions. Next to The Void (2000) - a bank of gel-caps labelled with miniature inscriptions 'Vascor', 'Gelgy' and 'Abana' - was a vitrine, Hirst's ventriloquist's dummy, the medium through which he speaks most eloquently, sealing off bone-white skeletal models of various animals: a rabbit, a dog, a parrot.

And while their arrangement in this transparent Wunderkammer recalls the taxonomic displays in museums of natural history, it's more the boxed balsa wood pterodactyl models available in the museum's gift shop (or Imaginarium stores at the mall) that spring to mind. If it were just this cheeky nod to Mark Dion's incredibly lame attempts at anthropology, we'd be in trouble. But this is just one errant asteroid orbiting the outer rings of Hirst's universe.

So, are we talking about the snap-together Surrealism of Hans Bellmer's The Machine Gunneress (1937) or the Dada vivisection of Man Ray's Stratified Rocks (1920), whose pumping hearts and flayed ribs are arranged like layers of geological sediment? The massive painted bronze anatomical model Hymn (1999) at Gagosian's entrance might suggest the latter. It stands with the proud, erect posture of some ectomorphic stevedore, yet, as a gatekeeper or benign guardian, it manages seamlessly to integrate the ghoulish with the reassuring order of a compartmentalized, hyper-rational world. What could be more bureaucratically rational than pulsing, viscous innards, made static in monumental bronze? And yet Surrealism, whether Pop-Surrealism or sci-fi Surrealism (the two are virtually indistinguishable right now) doesn't manage to approximate what Hirst does. I invoke the metaphor of the street, then, in the same spirit as William Gibson's Neuromancer: 'The Street finds its own uses for things - uses the manufacturers never intended.'

But what Gibson forgot to mention is that the street couldn't care less about labels such as Dada, Neo-Geo, or Post-Minimalism. The street, like Hirst, just is. In this sense Lost Love (2000), a gynaecologist's chair and a metal table with a computer, all housed in a giant aquarium filled with tropical fish, is not about packaging Smithson's notions of entropy in the spectacle of blowfish waiting for the knife in a Japanese restaurant, or Koons' alchemical transformation of a basketball into an instant artefact simply by embalming it behind glass. Lost Love, like love itself, resembles Man Ray's Enigma of Isadore Ducasse (1920): shrouded, amorphous, elusive, calculatingly mysterious - a feeling, in other words, and not a movement. In this way, and in the way of beachballs floating on air jets over sharpened Ginzu knives (fragility, the tenuous balancing act of life), or ping- pong balls vibrating in a trough like nervous atoms (science, the impossibility of sustainable development in a chaotic and overcrowded world), Hirst proves he has the Midas touch in reverse: everything he handles turns to soul.