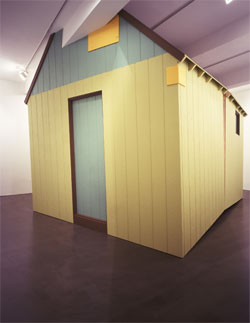 Be it never so humble, there’s no place like the American home. Or the American house, to be more precise. In 1845, undeterred by having inadvertently burnt down acres of forestland during an ill-fated camping trip, Henry David Thoreau famously went off to another nearby part of the Massachusetts woods to build himself a cabin and bask in the heaven that is the absence of others. The five by three metre shelter was more than a dilettantish attempt at home-building, of course; it was a philosophical and political manifesto. As much a denunciation of the ills of 19th-century America as was his paean to nature and self-reliance Walden (1849), the dwelling begat a long line of miniature Utopian hermitages built in frustration or defiance or muddled visionary expectations, a lineage leading directly to the humble doorstep of Professor Theodore Kaczynski.
In 1972, after burning his own personal bridges to academic intellectual life and its perceived devil’s bargain with the American ‘technological–industrial complex’, Kaczynski slipped off into the wilderness and did much the same thing as Thoreau. In his equally cramped, isolated cabin in Montana he fashioned not a radical conception of political dissent based on non-violent civil disobedience, as Thoreau had done, however, but instead patiently crafted beautifully home-made explosive devices that he mailed to selected academics, scientists and business leaders. Over a period of 20 years the ‘Unabomber’ managed to kill three people and maim 23 others.
To all intents and purposes Thoreau’s house and Kaczynski’s are identical, sharing the same physical dimensions and the same utilitarian spareness, and embodying similar impulses of revolutionary social critique, asceticism and anti-authoritarianism. It is an irony that has not gone unnoticed. And it is one that suffuses Daniel Joseph Martinez’ sculptural installation The House that America Built (2004). For the show Martinez reconstructed a full-scale replica of Kaczynski’s clapboard cabin, wedged awkwardly at a raking angle into the gallery space and split vertically (Gordon Matta-Clark-style) down the middle, as if being dissected to see what bland horrors it contains. But inside it is empty, just an uninviting void of raw plywood. Outside Martinez spruced things up a bit, however, using home-maker maven Martha Stewart’s signature line of bucolically named designer house paints (‘Hosta Leaf’ for the knobless doorway, ‘Araucana Green’ for the cheap siding, ‘Cosmos Lemon’ for the plywood squares crudely patching over termite holes or the spots where the rain gets in) in what is best described as a terrorist-recluse makeover.
By inviting both Martha Stewart and the ghost of Matta-Clark to this divisive and increasingly creepy housewarming Martinez effects a neatly economic conflation of unresolved and perhaps unresolvable domestic American themes. It’s a sizeable one-liner that for all its cleverness nags at the viewer and lingers at a slow burn in the memory. The LA-based Martinez, who got people’s attention at the 1993 Whitney Biennial with his provocative ‘I can’t imagine ever wanting to be white’ buttons, is here imagining the place where starkly different models of American Utopia meet – pacifist, insurgent, consumerist – and wonders if they don’t all belong under the same roof after all. In each case Utopia is felt as a lost state of grace, and the house as a way to reclaim and reconstruct it. Anatomizing, as Matta-Clark did with his splittings and cuttings of humdrum clapboard homes, the naked, unsuspected frailty of the American social contract, Martinez ably nails down a certain inherent irreconcilability of innocence and complicity, which otherwise shelter together without much scrutiny.
Both Thoreau and Kaczynski spent a lot of time pacing their self-imposed exiles, thinking about what afflicted the nation and how it could be made a more perfect place. In her rise to prominence as a ‘guru of how-to’ Stewart also thought about what was wrong with America and found out there was nothing that a little diligent handiwork, shop-bought wholesomeness and a fresh coat of periwinkle couldn’t fix. (She obsessed over the perfect Easter egg the way Kaczynski did over the most exquisite letter bombs.) Her enemy wasn’t materialism or technology or rampant corporate dominance over every aspect of American life; it was bad taste.
But Martinez appears to suggest that, in her way, Stewart is a child of Thoreau too. She is one pos