BY Lisa Panting and Malin Ståhl in Reviews | 12 APR 05 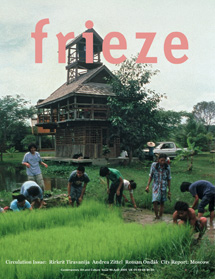 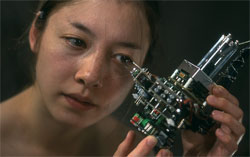 When I think about Artificial Intelligence (AI), there are two aspects that come to mind: on the one hand, fictions where AI governs complex computer systems that are progressing to some sort of meltdown on Earth; on the other, the creaky robotics that dominated the face of popular Modernism up to the end of the 1960s. Looking at the relationships between male, female and robotic performers (with names like A-Mouse, Dumbo and Stumpy) in Daria Martin’s 16mm film Soft Materials (2005), these flights of fancy are brought to a halt. To my relief bio-robotics experts at the AI Lab at the University of Zurich, with whom Martin collaborated in making this work, are focusing on advances in ‘the interdependence between talk environment, sensory systems, motor systems and neural processing’. Suddenly the title Soft Materials seemed very apt indeed.
Martin has installed the work to be seen as an event. This goes some way to bringing out the cinematic experience of the piece, but perhaps more importantly heralds the element of performance at play in the work itself. We are demarcated as an audience, and there is none of the licence often ascribed to the drifting viewer of video or film installations in the gallery environment. This straightforward strategy takes us back to the Modernist era, where those boundaries were more often vigorously upheld. A continuous material engagement is established, right down to the soundtrack, devised using Bisosonics, a computer programme made by the lab. This is also evident in the camera treatment of the objects, which tenderly evokes their materiality. Soft Materials communicates via its internal aspects; the structure can be discerned in the relationship between movement, objects and camera, and through human presence, which can be described in terms of six performance moments that make up the whole. Each action takes place between a human and a robot, initially between a man (Ben Ash) and Eyebot, then a woman (Nina Fog) and A-Mouse. There is affection, curiosity, a certain erotic charge, playfulness and mimicry. It is to the credit of the performers, and the designers of the robots, that this interaction allows our minds to wander with the other-worldliness of the scenes laid bare before us. One could ask whether the film sets up a series of binary oppositions that never collapse, or one could consider it as a whole. Perhaps more poignantly, Martin’s use of the robotic presence manages to suggest something beyond the divisions of gender somehow being performed, hypothesizing a future behavioural dynamic wonderfully resplendent in its multiplicity.
My favourite moment is when Dumbo, an object that resembles a bird or a plane, sways, encouraging Fog to copy its moments, creating a kind of balletic duet. The sheer scale differential between human and small object is not only funny but also inverts the expected relationship between human and robotic intelligence. This is where the Modernist project is revealed, in the sublimation of the human into the mechanical. The
automaton has a fictive presence in many pre-World War II avant-gardes, and Martin seems to be inspired by works of this period. (One has only to cast one’s mind back to the interest in mechanics displayed by artists such as Oskar Schlemmer of the Bauhaus movement, and post-war, to the work of Robert Morris.) But this relationship to historical avant-gardes, which has underpinned Martin’s earlier works, is somehow recalibrated in Soft Materials: less Modernism, more modernity. This modernity we are faced with causes a split between near and far, past and present. We are in the present, but the work’s aesthetic values displace us – building on our internal assumptions about the image given while simultaneously causing us to make a mental shift into the here and now.
Soft Materials immediately locates us within the paradigm of the laboratory. But whose laboratory? If an artist’s studio can be classified as a testing-ground designed for trial and error, then one could claim that this methodological impulse is shared between science and art. There is, of course, a long-standing polariz-
ation between the two disciplines; one that highlights questions about the creative act, about the objective and subjective. The characters in Soft Materials mediate between these poles, describing not only a tradition within science, but art itself. But these motifs exist deep down in the bedrock of the work, remaining earthed in the material world of Martin.

Lisa Panting and Malin Ståhl are the co-founders of Hollybush Gardens, London.