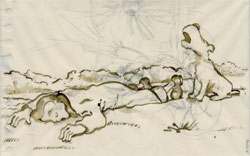 ‘Palimpsest’ seems like too prissy and pernickety a word for David Godbold’s irreverent layerings of image and text. They are much too rude and witty; they create too much of an impact. Among the outburst of framed works on the long gallery wall there is a crumpled printed disclaimer for shipment liability overlaid with a drawing on tracing paper of two biblical-looking characters – barefoot disciples, perhaps. The caption reads: ‘Last one to kill a bad guy buys the beer.’ The drawing is after Poussin, the underlying small print a piece of flotsam that has fallen into the artist’s hands and the text a constructed interference that confirms the provenance of neither, while consolidating them into something funny and wicked. So ‘palimpsest’, as an indication of eradication and legibility, is not accurate. These works have accrued meanings that neither cancel one another out nor illuminate the whole.
Godbold has been working in this way for five years or so, collecting a profusion of everyday flutter and clutter found among the traffic of human life – from shopping lists to anchorless messages, angry notices to rudderless jottings. These are then placed behind tracing paper, on which calligraphic ink drawings, quoting high art and low culture alike, from Renaissance paintings to Tintin, play off meddlesome texts, from the single, devastating word to rambling dissertations. This may sound like a formulaic and limiting way to construct a picture, but the effect of Godbold’s precision in layering and abutting is to bastardize, correct, question or lampoon endless big ideas on religion, morality and politics. In addition, art history’s suffusion with religious imagery lends the work a maniacal, Catholic ambivalence, which seems all the more pertinent in Dublin, where the artist has lived for some 15 years. The long-standing dualism of mind and body and the contentious triumvirate of God, the scientist and Everyman provide the artist with constant friction from which thunderbolts can fly; the writings of Immanuel Kant, Charles Baudelaire and Arthur C. Danto, for instance, provide additional ammo.
Godbold can render phenomenology as deftly as imagery. A recumbent man (a weary pilgrim?) regards a tree that has grown from his groin, on which Mary and the Christ Child govern over the disciples in a hierarchical heraldic design. Between them curling scrolls bear legends such as ‘top shelf’, ‘humble B-list or lower’ and ‘happy to be included’. Below the image, computer-printed onto the tracing paper, is the caption ‘It’s hard – it should be hard / I like that it’s hard’. Handwriting from the layer beneath leaks through: a to-do list includes mundane and critical tasks, from television licence chores to a rather more serious mammogram. At the top of the tree Mary is saying ‘Don’t look at me!’ while Jesus thinks, with his hand raised in apparent blessing, ‘Ok, I did the list’. The hunt for concrete meaning is futile, although innumerable associations inhabit the piece like gremlins, which is where its potency lies. Godbold, in refusing to say outright what is wrong, sick, absurd or lamentable, demands that we join things up for ourselves. His cartoons are the equivalent of the insinuating raised eyebrow, of hands defiantly on hips, of the laconic ‘Well?’
Godbold has been selected as the official artist for the imminent British general election, with a ringside seat and access behind the scenes during the parties’ campaigns. Traditionally political cartoonists, from James Gillray to Steve Bell, have employed image and text to affirm one another in a crusade of critique and ridicule: text tends to quantify the imagery, while the picture qualifies the text. Godbold’s, however, is a very different mechanism – it is in the gap between image and text that the viewer’s criticality is activated. This gap may be a direct representation of hypocrisy, error, questionable causality or pretentiousness; it may configure the discord between religious piety and the pragmatic requirements of everyday life, or the purity of intellectual reason versus marred corporeal experience. So, if Westminster thinks it will duck the direct barb and loaded sling, it has been ill advised. Godbold’s laconic evaluation of what it is to be human is a smear campaign against hierarchical absolutes, and government cannot help but be implied in this.