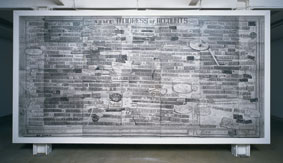 Visiting Matt’s Gallery in September proved to be a pretty ominous experience. After I had been greeted by a member of staff and politely ushered into the gallery, the door was shut firmly behind me, and I was left to navigate a large semi-darkened room. Approaching David Osbaldeston’s billboard-like structure Your Answer is Mine (2006) from behind felt like being thrown into a film where a dramatic scene takes place at the rear of a cinema screen, or left to blindly navigate the backstage area of an old auditorium. Once I was in front of the work, this theatricality became starkly clear; as the only object at the far end of the gallery space, Osbaldeston’s construction held a huge black and white poster filled with a complex arrangement of self-referential texts and concise personal ruminations on current contemporary art discourse. Part advertisement, part music-hall set, this graphic hoarding hovered in a shallow-lit area, the surrounding darkness a groundless void out of which the announcement seemed to emerge.

While this may sound like a relatively polite stylistic nod to Victoriana, the crux of Osbaldeston’s installation was a critical evaluation of current art-speak. It pleaded with us to act on its humorous descriptions of genres and sub-genres of contemporary art. Under the heading ‘(Some) Address of Accounts’, texts such as ‘Post-Relational Lucky Dips Now’, ‘Vaudeville Auto Lecture Now’ and ‘Revision of Romanticism as a Methodological Tool to Effectively Articulate a Counter Position to Rationalism Now’ described the kind of targets Osbaldeston was aiming at. (The first of these is an obvious dig at lukewarm ‘relational’ interaction, while the third refers to a combination of Expressionism and Conceptualism.) This work was firmly rooted in the present through its insistent event-oriented ‘now-ness’ and its multiple arguments calling for urgent and immediate realization.

The most unusual characteristic of the ‘poster’ was that it was rendered as a huge multi-panelled etching; a representation of an enlarged photocopy, which itself was a copy of a drawing of an original collage. This reproduction ad infinitum could also be discerned in the form of Osbaldeston’s subjective ideological texts, or through the materialization of multiple ideas as a layered, reflective, yet paradoxically unfinished monolithic scripture. In this sense the billboard looked like a massive textual game of snakes and ladders; connections taking place within overlapping multiple ‘frames’, ‘drawn’ within the skewed ‘poster’.

Speech bubbles threw texts into this critical soup with phrases such as ‘Those power relationships that often get disturbed between image-action-&-viewer’ next to pie charts describing the relative importance of art publications and the world’s biggest biennials. In the former ‘FRIEZE INC ART FAIR’ scores a paltry 9 percent, while ‘OCTOBER’ gets a ludicrous 41 percent of the share; however, it’s left uncertain what each proportion actually represents. This could all have looked rather predictable, but to some degree, because the work ranged from the complex to the purely ridiculous, it allowed an openness in which new critical connections might emerge. The work’s absurdism also pointed to a world beyond its immediate frame of reference. The various mis-spellings and parentheses brought to mind the power of Mark E. Smith’s lyrics for The Fall; it’s probably no coincidence that Osbaldeston lives and works in Smith’s home town of Manchester.

That said, it was hard to gauge the artist’s belief in the arguments he put forward. In the gallery foyer the press release, invitation card, exhibition brochure and even booklets on other artists had been copied and given the artist’s familiar treatment. Despite endless reflection, however, his work often simply repeated current theoretical dilemmas rather than taking them further or asserting any independent position. Osbaldeston’s simple act of listing can also be found in his magazine, Stellar, where the artist reiterates a fan’s homage to various artists by reproducing and commenting on related press material. If there’s a problem, it’s that Osbaldeston’s critique is sometimes a little too polite.

However, his concerns had been pushed to the limit with this installation, the strength of which was in the humorous mirroring of a myriad of positions in simultaneous critique and affirmation. Osbaldeston’s next step may be to take his project to an even greater level of blinding complexity. What we can be sure of is that, over time, the demons he is seeking to exorcize will only escalate in number.