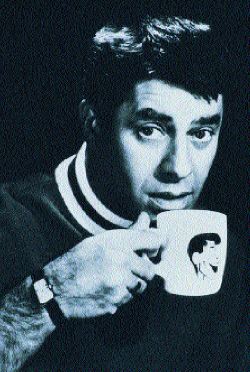 David Robbins has been in pursuit of pure comedy for the past 20 years. While his method is related to social anthropology, the objects he makes are hybrid art products. For example, he builds props, not sculpture, and his pictures are neither photographs nor paintings. The result is an anti-illusionistic 'concrete comedy' that does not rely on the suspension of disbelief. Unlike contemporary art's meta-comedians such as Maurizio Cattelan and William Wegman, Robbins avoids the easy laugh, pithy one-liners, or sleight-of-hand magic. As he says, it's not so much 'what's the deal with those lemon-scented car deodorizers?' as 'what's the deal with comedy?'

This mini-survey of Robbins' work was an unabashed celebration of the potential of the imagination, and it succeeded on many levels. Contextualizing objects made over the last 14 years and exploring the complicated relationship his work has with the art industry, the two spaces, carefully arranged by the artist, looked like a collection of oddities on loan from the Museum of Jurassic Technology. The artist's ambivalence towards art and art history was apparent in the way he employed just enough beauty to draw the viewer into his comic psychology: shy on irony and rich in parody, his work relies strictly on objecthood, not documentation. Purposefully confusing, the exhibition was best approached as a grouping of artefacts informed as much by theatrical, literary and Pop traditions as by art.

A mirror in the shape of a piece from a jigsaw puzzle, entitled Situation Comedy #6 (1994), served as a metaphor for the work's indeter- minate currency as an art object. Next to it was a small white painting with John Hancock's signature copied in the lower right corner, and another small rectangular mirror etched with the text 'Atelier á Louer' (studio for rent). Each of these objects literally put the viewer in the picture.

Talent (1986) and Art Dealer's Optical Test (1987) objectify an industry built on subjectivity. Talent is a collection of black and white portraits of art stars from the 1980s who happen to be Robbins' friends, such as Cindy Sherman, Robert Longo and Alan Belcher. For Art Dealer's Optical Test Robbins designed an objective-looking, pseudo-scientific method for identifying potential masterpieces. For this piece some of his New York art world acquaintances, such as Colin de Land, Peter Nagy, Clarissa Dalrymple and Jay Gorney, were subjected to Robbins' playful analysis of visual acuity. At their most basic interpretation both works mock the art world Robbins slips in and out of, but at their most complex they sow the seeds of a sophisticated visual product unique to itself - objects at the periphery of art and entertainment, scholarship and silliness, comedy and deconstruction.

One piece in the exhibition unaccounted for on the checklist and presumably constructed specifically for the show, succinctly summed up Robbins intentions. It was a harlequin-patterned slipcover fitted over an oak museum bench in the middle of the gallery. A silver jingle bell was fastened at the point where the black, white, and grey diamonds met. Although it wasn't acknowledged that this object was 'art,' it was obvious by its craft and location that Robbins wanted visitors to sit on it - a reflection of Robbins himself, who seeks not to be an important artist but an important imagination.