BY Merrill Falkenberg in Reviews | 01 APR 08 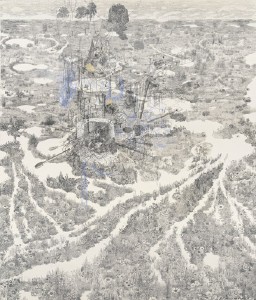 Intrigued by the dense lithographic illustrations of Victorian children’s books and the implicit menace and violence of classics such as Lewis Carroll’s Alice in Wonderland (1865), Byington, who is based in Berkeley, trained himself to draft in the manner of 19th-century illustrated books. His pictures are built up through a multi-step process that combines collage, printing, painting and drawing. Andy Warhol, Robert Rauschenberg and Christopher Wool are among the numerous artists who have set precedents for combining paint and silk-screen printing on the same surface, yet Byington’s work is distinguished by the consciously historical component and the at times cryptic aspects of his subject matter. The detailed and intense handiwork demands intimate viewing and, like much painstakingly constructed imagery, seems like a subtle suggestion to the viewer to slow down and start looking deeply.

In the emerald-hued The Clock (2007) broken tree stumps provide visual footholds up and across the surface of the painting where miniature alcoves and grottoes are formed by the choreography of anthropomorphic trees with reptilian bark. Eyes seem to peer out from the deep spaces in between the trunks, while the timepiece in question remains obscured by overgrown vines in the central area of the painting. The nearly psychedelic Greenhouses (2007) is a multicoloured landscape that is so densely worked and topographically contorted that it suggests the claustrophobic environs of a population and a habitat that have grown out of control. Two hive-covered domes appear beneath jagged, rectangular and pointed forms that could be caves, spires, fantastic buildings or, in one particularly ominous case, a severed finger. In the past Byington has referred to both Andrei Tarkovsky’s classic science fiction film Solaris (1972) – about a space station in deep psychological crisis – and his parents’ own work on the Manhattan Project at Los Alamos during World War II as significant points of reference. It is clear that his mythical landscapes, which one ‘reads’ the way one deciphers the pictorial vocabulary of a Chinese scroll landscape, have an apocalyptic component to them. This is particularly explicit in New Destruction (2007), where shattered telephone poles, dismantled signs and lines that look like defunct wires serve as elements of a story left hanging. Creating spaces devoid of humans, Byington’s images render an alternative universe where animals and insects rule the earth with no apparent hierarchical distinctions.

While it is undeniably exhausting to take in all the details of a painting in one go, the collages are particularly engaging as the artist’s original drawings are pasted along with miniaturized photocopies from illustrated books. These images are the basis for the silk screens, yet their intricate construction is deliberately minimized in the paintings as the artist completes each canvas by glazing, scraping and over-painting to eliminate all traces of the original silk screen. In the catalogue that accompanied the show Carter E. Foster discusses Byington’s interest in horror vacuii, a term used to describe the thrill of ornamentation, where no surface is left untouched, as in rococo interiors. Critics have frequently referred to Max Ernst as a source of inspiration for Byington, but Hieronymus Bosch and his hellishly ‘all-over’ panel paintings seem apropos as well. So does the mesmerizing optical effect of certain kinds of 19th-century pictorial wallpaper motifs, with their repetitions and interplay of abstraction and representation. One wonders what might happen to these phantasmagorical spaces if Byington enabled his insects and animals to be a little more naughty, engaged in a post-apocalyptic garden of earthly delights.