Diary of a Somebody 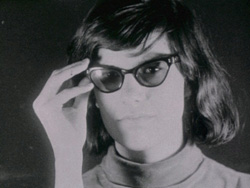 In 1964 Susan Sontag, whose essay ‘Notes on Camp’ had lately appeared in the autumn issue of the Paris Review, sat for seven of Andy Warhol’s Screen Tests, the four-and-a-half-minute ‘stillies’ that the artist had started making earlier in the year. In the first of Warhol’s portraits the newly famous critic faces the camera solemnly, her hair combed flat, every inch the slightly uptight young scholar. In the second, however, she seems to be rehearsing already the role of ‘Susan Sontag’; her hair is an unruly black mane, her dark glasses announce her ease with the Factory setting: she might be an especially poised and relatively sober superstar. By the third she is leaning into the camera with the familiar charisma of her mature self-image: all that’s missing is the later streak of silver hair.

If the recently published extracts from her diaries are to be believed, however, she had already taken control of her iconic status.

Warhol commented of this last study that Sontag ‘might be OK’ for his projected film of The Thirteen Most Beautiful Women (1964). If the recently published extracts from her diaries are to be believed, however, she had already taken control of her iconic status. Publication of the journals in book form will begin next year, but in the meantime we have the young Sontag’s fragmentary efforts at self-fashioning to be going on with. In her diary, she writes in 1965, she works herself up, invents a writer, a voice, a public presence. Her only rival at the time, in terms of scurrilous, self-revealing musings on her mid-1960s’ milieu, and sedulous attention to how she appears to her audience, is surely Warhol himself, whose The Philosophy of Andy Warhol (1975) has been reissued this spring to mark the 20th anniversary of his death.

The portions of the journals that appeared last year in The New York Times and The Guardian reveal a Sontag who is equal parts neurasthenic wreck and self-assured literary phenomenon. The first writes in a style that is deadpan, flat, laconic, almost as offhand about her angst as Warhol is about such topics as love, beauty, time and death. She returns from cocktail parties in Paris with Jean-Paul Sartre and Simone de Beauvoir and is stunned by the ugliness of New York: ‘nothing but eating, if that, and the frenzy of the bed’. Around 1960 her Sundays especially seem to have been excruciating: ‘Sunday: awake at 7:00 – rage… depression, lassitude. I take Benzedrine at 5:00.’ The second persona, the nascent writer, compensates by a prodigious act of self-imagining: ‘I write to define myself.’

But she does not merely make herself up in her diaries – a common enough trope, after all: the authentic self crafted into being. She doesn’t seem quite to believe in the finished product at all, and comments of one text in 1967: ‘I’m writing the “[Story of] O” review which has turned into a 35-page essay. It’s OK. Still, I don’t believe a word I’m saying.’ Considering her future career as a public intellectual (she is quite sure of this), she compares herself to the writer Lillian Hellman and vows never to give an interview until she can replicate Hellman’s self-possession. She professes admiration for Jasper Johns’ amazing élan: ‘Jap’s authority, his elegance. He is never flustered, apologetic, guilty, ashamed. Perfect certitude. So, if he picks his nose or eats in the Automat, he’s being elegant.’ She aspires, in other words, to be an intellectual dandy: an object, not an oracle.

It is all the more disappointing, then, to discover in a recent collection of her late essays a Sontag who seemed to have taken her carefully wrought character for reality, to have imagined that her every pronouncement, no matter how conventional, had the glamour of hard thinking about it. At the Same Time (2007) is a collection of 16 essays – in truth, many of them are, rather dismayingly, speeches given on the occasion of receiving various prizes – written in the last four years of her life. (Sontag died of cancer in 2004.) At the last Sontag was perhaps too sure of the verity of her own arguments, even when they amounted to little beyond reflections on the eternal nature of beauty and the aesthetic bankruptcy of contemporary art.

‘Physical beauty is enormously, almost morbidly important to me’, writes the young Sontag to her journal at one point. But, like Warhol, she saw through beauty too, to the machinery underneath, and relished the artifice, perhaps, more than the effect. (At the time of her sitting for the Screen Tests an article in The New York Times had talked up her essay on camp and singled out Warhol, however carelessly, as the city’s prime exponent of the aesthetic.) If the blank, anomic prose that punctuates her diaries – an atypical register for this conscientiously arch stylist – reads at times like Warhol’s deceptively bland Dictaphone ramblings, it is because they both embodied, briefly, alongside all else they did, a sort of brittle, brave (and uneasily Queer) self-invention: silver hair and all. And both, in time, became immured in the image and lost their way.

Brian Dillon is the author of a memoir, In the Dark Room (Penguin, 2005). He is working on Tormented Hope: Nine Hypochondriac Lives, to be published
in 2008.