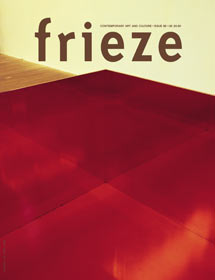 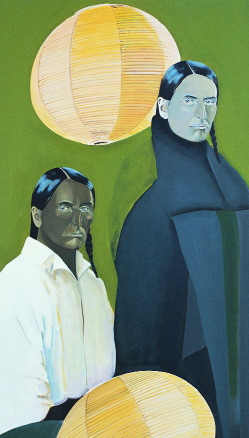 They look very similar, like brothers, or lovers who are so close that the breakwaters between their identities have begun to crumble, and it's only by noting their tiny, information-rich differences that we can tell them apart. (The man on the left is fractionally bigger around the gut, and while his chin is all chiselled planes, his companion's resembles a pert, spankable bottom.) They wear the same worrying hair-do, a swept-back, centre-parted bouffant of the type beloved of Eastern Bloc politicians. Mashed together in a protective, vaguely wary embrace, they might be Siamese twins, or Freddie Mercury and Brian May on the cover of Queen's The Miracle (1989), an album that celebrated Glasnost and test tube baby technology with the same blowzy, quasi-operatic pomp. Ivan Loves Ivan is a decidedly odd canvas, where Dragicevic's preoccupations - doubles, the difficult business of painting, the way former communist countries hold up a fairground mirror to the West - parlay in a palette that's simultaneously washed-out and wildly chromatic, like pale, pale fire.

Dragicevic has said that 'my painting for me is like a doppelgänger. It's like me, only darker.' But if most artists' work is a form of shadow self (think of Pablo Picasso, with his paintings of harlequins, minotaurs and giggling, wanking monkeys), Dragicevic, a twin, takes this familiar idea and makes us feel its weird, phantom weight. Her Serenada (Serenade, 2003) features two figures in tailored white shirts, as crisply laundered as the linen in a grand, fading hotel. One of them, a black man, replicates the pose of Edouard Manet's Dead Toreador (1864), his hand clamped to his chest as though he's trying to stop his soul seeping from some mortifying wound. His shirt, however, is untroubled by bloodstains (its whiteness is waylaid only by delicate, lilac and soured-cream shadows) and the painting's atmosphere is, if not precisely of luxe, calme et volupté, then of luxe, calme and a skinny-limbed, faintly kinky eroticism that's got nothing to do with death. Sitting beside the black man is a bald, white figure. It's hard to tell whether it's male or female, but both characters seem bored by the public sculpture in the background - an absurd bronze Möbius strip, bulging beyond the frame. This indifference shouldn't be surprising. Most public sculptures, after all, don't really function as art, if by art we mean something that's looked at, and thought about, and felt about. Rather, they have a curious invisibility, becoming (once the unveiling ceremony's over) backdrops to the chip shop lunches of truanting schoolkids, or landmarks where we await blind dates, our faces reflected, side on, in their dulled, verdigrised surfaces.

In Serenada public sculpture is painting's doppelgänger, its twilit, vision-starved twin. According to Jean Paul Friedrich Richter's novel Siebenkäs (1796), glimpsing one's double breeds misfortune, and this might account for why Dragicevic's androgyne - with its painterly curves, its painterly creases - averts its gaze. In any case, the work is all about looking, its heat and its hazards. It's rare to encounter a painting that facilitates this process so effectively, drawing the viewer in (via the rug beneath the black man's back), taking them on a deft, flirtatious tour of the motifs (via the ululating sculpture), and then leaving them so little the wiser as to the meaning of what, in the end, they have seen. Maybe meaning, here, doesn't matter so much, and one should abandon oneself to the piece's pleasures: its airless languor, its Gauguin-like colours, the way the bowed stripes running beneath the sculpture insist, very playfully, on the flatness of the picture plane.

At times Dragicevic can make you fall in love with painting - and what painting can do - all over again. Take her Reconstruction Isn't Easy (2002), a mirrored portrait of a vampire-pale accordionist. The piece's palette of greys, browns and beiges seems cribbed from the décor of some doleful Eastern European café, but its drabness is relieved here and there by instances of intense colour: the scarlet of a pursed mouth or the crazed cerulean of a pair of eyes. These are tiny touches, true, but they do a lot of work, bringing to mind just how alien a reconstruction job (whether it be of a face, or a former communist country) can look when it's only partially complete.

Dragicevic presents another reconstruction of sorts in Sova (Owl, 2003), a double portrait of Archie Belaney, an early 20th-century bourgeois Englishman who, by posing as the Ojibway brave 'Grey Owl', became one of Canada's earliest and most celebrated environmental campaigners. In Dragicevic's painting we see both Belaney and his Native Canadian double: the first a pallid nobody in a black raincoat, the second a sun-bronzed hero in a fancy butterfly-collared shirt. At the canvas' poles float two orb-shaped paper lanterns, of the type associated with 1950s moderne chic. What are they doing here? Perhaps they're twin placentas, providing Belaney and 'Grey Owl' with the nutrients they require to square up to the modern world, with its crises of the environment and of the self. Perhaps they're a pluralistic take on the 'light of reason', or perhaps they're thought bubbles, or dreams - the one thing Belaney and 'Grey Owl' shared.

In his poem 'Antigonish' (1899) Hughes Mearns tells of a peculiar incident: 'Yesterday upon the stair/I met a man who wasn't there/He wasn't there again today/I wish that man would go away.' Before I encountered Dragicevic's paintings, with their tight beauty and troublesome doubles, I thought that Mearns was articulating a simple, albeit slightly creepy, paradox. Now I'm not so sure. The more I think about it, the more it seems to me that the man Mearns met - like Archie Belaney in Sova, or a Westerner holidaying in 'liberated' Eastern Europe - was himself.