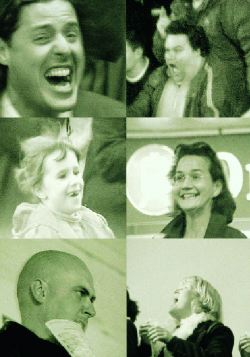 Dryden Goodwin's video installation Wait (2000) combines the best elements of the artist's earlier practice, in which his interest in structure and procedure was secondary to his humanism. First seen at the Tate Liverpool as part of the 'Video Positive' festival, Wait was accompanied here by digitally drawn figure studies. These, attractively displayed and labour-intensive as they were, seemed somehow too complacent. Their inclusion was perhaps a mistake - it would have been regrettable for the visitor to have failed to attend to the video because of them.

Comprising five back-projected screens arranged in a courteous semi-circle, Wait is a monochrome study of people filmed, without their knowledge, in public places. Some 16 of these character studies were represented, their relationships structured in looped synchronization. The apparently unpredictable subject crossover this created was actually programmed, but was less self-conscious and obvious than the structuring techniques devised by the artist for earlier pieces. The lack of synchronicity was further emphasized by the soundtrack (composed by Goodwin), the duration of which was shorter than that of the video sequence. This aural landscape manipulated the relative significance of narrative events - as film music does - but its relationship to the images was subversively unpredictable. Its slightly sci-fi, melancholy, industrial tone could not be traced to obvious instrumental sources, which compounded its psychological tension, especially as the videoed subjects were silent. Apart from sequential order and disorder, Goodwin's identifying principle was the collecting of videoed situations of heightened expectancy. Recalling 19th-century illustrations of plaster busts displaying a range of emotions, the artist's subjects expressed pleasure, anger or impatience as they greeted arriving passengers at airports, watched sporting events or coped with other situations of anticipation.

Goodwin lent dramatic emphasis to his subjects by withholding knowledge from the viewer about what the people he filmed were reacting to. A woman registers emotions of drunk pleasure as she witnesses a firework display, the brilliant explosions seen only as glowing reflections on her face; a fat, bestial sports spectator expresses extreme anger at an unspecified event; a gap-toothed child displays contented pleasure for no apparent reason; and, particularly poignant, a groom (his bride unseen) expresses a happiness so consummate it appears proof of the possibilities of love.The artist identified these emotions as they peaked, maintaining them in a quivering balance by his use of digital reprocessing; jogging the image backwards and forwards in slow motion. The effect is one of compassionate expansiveness, in which personal individuation enjoys an equivalence with the greater community.

Goodwin's broadly humanist outlook is a rarity within current art practice. Although Wait has obvious contradictions - the work's technique of covert surveillance is antithetical to its generosity of spirit - it transcends these, sustained through a counterbalancing equilibrium.