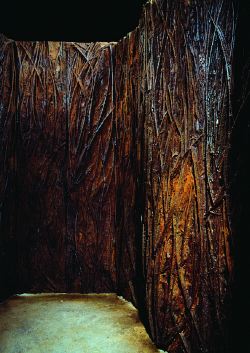 A book published in the early 20th century by the US Bureau of Land Management states that 'although the word wilderness is a noun it acts like an adjective. There is no material object that is the wilderness.' This is a bizarre epistemological admission for the federal government to make, but useful. Forest fires don't matter so much if, with a technological and linguistic shuffle, nature's purity can be guaranteed in advance. It also brings nature a little closer to an archived, and depleted state.

Gardens, as we all know by now, aren't objects either, they're Playstations of nature which, in the gardening-obsessed UK, are reaching a parlously overworked and exhausted state. This exhibition was titled after Charles Ryder's description in Evelyn Waugh's Brideshead Revisited (1945) of the cloistered, evanescent gardens at Christ Church College, Oxford. It generously delivered a little eye-candy for the weekend garden centre browser - for example, Jan Vercruyse's beautifully rendered and sexualised designs for highly formal enclosed gardens (1994-5), and Anthony Gormley's Edenic giant bronze apple that began as a body cast, Fruit (1991-3) - while working over the contingency of gardens pretty thoroughly.

Robert Smithson claimed that 'the certainty of the absolute garden will never be regained'. The exquisite and dissolute Piranesi drawings of the Villa d'Este and the Tivoli gardens which punctuate this show are a warning that the painfulness of separation isn't letting up.'Enclosed and Enchanted' didn't have the globalising, shopping-list feel of the Serpentine Gallery's recent exhibition 'Greenhouse Effect' and was much less wide-ranging in ambition than 'Le Jardin', in Rome, but its target was simpler and more reticulated - the estrangement we feel from nature, and the out-of-reachness of gardens.

Takahiko Iimura's film, MA: Space/Time in the Garden of Ryoan-ji (1989), about the famous 16th-century stone garden in the Ryoan temple in Kyoto, didn't benefit from being in the same room as Jan Vercruyse's work or Giuseppe Pennone's congested bronze and plant Gesto Vegetale (Plant-Like Gesture, 1986-1996) pieces, but that was the point. The limping, grainy 16mm tracking shots make the garden seem vast, when in reality it is small, and crammed with tourists with camcorders.

If labyrinths and mazes are one end of a Eurocentric view of gardens what counts as extreme sculptural landscape architecture, the dry Zen Garden has taken its place at the other. They are gardens that cannot be entered, unchanging and esoteric, with a moss accretion speed that only Smithson fans could understand.

Diana Thater's Oo Fifi: Five Days in Claude Monet's Garden (Part One)(1992) is a slam dunk - no Modern garden was ever so mediated as Giverny. Although the complete work contrasts elk and wild animals in Yellowstone National Park with the primped, clipped hedges of the Monet gardens and their telegenic lily ponds, a simple walk through them is unhinging enough. The projection is separated into red, blue, and green screens which are layered on top of each other but slightly out of whack, tweaked to make the blue glaucous and the red a washy burgundy, like a really freakish vegetable garden where monster squashes cohabit with sweet peas.

Gilbert and George's huge charcoal drawings, The Nature of our Looking (1970), anticipated every lame Time Out article ever written about the often melancholic duty of a weekend escape from the city. 'Here in the country's heart, where the grass is green, we stand very still and quiet' proclaims one. The drawings are corrugated with fold marks, like Sigmar Polke's photographs from Afghanistan, or Gorky's canvases. Their surfaces are littered with cigarette burns and stains, which lends them the patina of something which has travelled and been put away. Wolfgang Laib's Pollen from Pine (2000) is a vibration of custard powder-yellow pollen on the gallery floor, but even while visitors can't get close to it, insect tracks tear up the surface of its choking, saturated, rectangle.

Stan Douglas' Fifteen Photographs from Potsdam Schrebergärten (1994) is the most multifaceted and intriguing work in the show. It depicts allotments in Potsdam in Germany - the product of a 19th-century plan to give workers a space where they could escape factory fumes, which are now stranded between electricity pylons, disused barracks, and television towers. Douglas fans will recall the reconstruction of one of these allotments in his film Der Sandmann (The Sandman, 1995), in which children find an old man shifting sand, whom they believe to be the Sandman - who steals the eyes of sleepless children. When they break into his garden they find that the piles of sand and unfamiliar machines are just the tools of a solitary gardener hoping to find a new means of growing asparagus in winter. Discovering that these unkempt plots are Arcadian expressions of human individuality is as disconcerting as a Poussin landscape in which we wrestle with snakes.