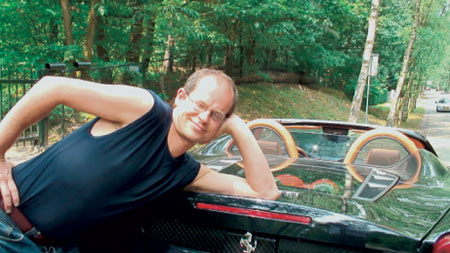 Kunsthaus Zurich has suddenly acquired a second entrance. HOLLYWOOD is written in big letters on the back of the building. Is this a multiplex cinema? For the duration of his first museum show, organized jointly with Museum Boijmans van Beuningen in Rotterdam and the Lenbachhaus in Munich, Dutch artist Erik van Lieshout did indeed install various cinematic situations at the Kunsthaus. And the emphasis was quite clearly on big emotions, tolerance and individuality – though not on easily digestible entertainment. Van Lieshout works with clichéd role models of Western society and pushes the limits of his protagonists, his audience and his own understanding of himself as an artist.

In the past the alley behind the Kunsthaus, with its cold atmosphere akin to a railway underpass, played no part in its exhibitions. But Van Lieshout chose it as the starting-point for his show, extending the architectural space of the venue into this far-from-glamorous passageway. Two video projections were sheltered by tarpaulins, with a degree of cosiness being created by oriental carpets. The cinema programme featured works from the years 2001–5, in which Van Lieshout tries to approach marginalized figures on the street in an attempt to establish contact with and understand them. Respect (2003) is one such experiment, in which the artist himself attempts to navigate between a brand of ‘street culture’ marketed by Hip-Hop and the liberal creed of respect in order to find a personal approach to North African teenagers or drug addicts, with a gangster rap soundtrack by 50 Cent. It is astounding that this undertaking does not result in a kind of ‘Erik’s Freak Show’, considering that the video runs the gamut of media clichés in its depictions of the so-called fringes of society. The artist achieves this by weaving documentary footage, fictional elements and an extremely subjective narrative into a complex fabric that focuses attention on his own limitations.

In a large-scale installation using, among other things, rough construction materials mainly salvaged from past Kunsthaus shows, Van Lieshout also tried to break down the usual structure of the indoor exhibition space – no multiplex illusions were to be found here. Instead, visitors entered a temporary, half-finished situation, like a stage set. Crudely assembled partitions acted as mounts for the numerous collages, sketches and paintings that accompany Van Lieshout’s filmic works. Besides more or less clearly political and sexual allusions, they often also recall scenes from the films. A group of semi-naked young people, some of whom could still be children, stand in a green setting: a family portrait (Untitled, 2006)? One girl’s dress bears the word ‘paradise’. Here too, with his extremely expressive use of paint and gesture, Van Lieshout explores the possibilities and limits of subjective artistic expression.

For ‘UP!’ (2005) Van Lieshout underwent therapy, focusing on his relationship with his mother. His lofty goal was to learn tolerance and thus overcome personal crisis. Van Lieshout concludes that he is, like his mother, unable to listen. The problem is that he constantly needs to talk. But rather than being simply a mouthpiece for himself, the work forms the framework for a plural narrative structure: for his own actions and utterances, in direct speech to his mother and his therapist and as a commentary on the film we are watching. ‘I wanna be in control, on top, in control’, the artist notes soberly, referring to his ‘ego’, over which he clearly loses control on a regular basis.

In his latest works, Part I and Part II (2007), the artist even tries to get his role as an alpha-male lead ‘under control’ by taking acting lessons. During a residency in the US he made two video works that resemble a road movie. Van Lieshout is accompanied by his editor Core van der Hoeven, and on the road he practises saying nice things. After a cup of coffee, which they both clearly find revolting, the artist praises the dubious beverage to the restaurant owner. He often gives free rein to his opinions only in the closed space of their hire car – the tragic thing is that his friend Van der Hoeven frequently doesn’t want to listen when Van Lieshout expresses his feelings.

Who is this subject, compelled to talk constantly about his emotional state at the same time as trying to control these emotions? ‘Kunsthaus Hollywood’ gives neither an answer nor a happy ending with regard to the question of whom exactly we are dealing with here. How is it possible, Van Lieshout asks, to make the transition from ‘me’ to ‘we’ when I don’t even know who I am? By placing the two levels on top of each other, Van Lieshout counsels laconically in a collage from ‘UP!’ (Untitled, 2005): ‘WE’ is stuck in red tape over the word ‘ME’.