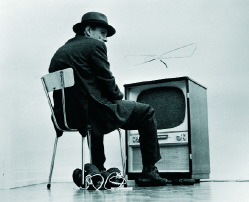 Bulldozers roll across the screen, making furrows in the sand of the Dutch coast. The tracks they leave form an trapezium, but from the camera's perspective the diverging lines are pulled together to form a rectangle that fills the screen. The edge of the image dissolves into stripes while the central space remains bright, almost white. The date is 15 April 1969, and Gerry Schum's Fernsehgalerie (Television Gallery) has transformed West German TV screens into an exhibition space. The theme of the first episode, produced by Sender Freies Berlin, was Land art, with a second episode, called Identifications, broadcast the following year.

Filmmaker Gerry Schum (1938-73) merged fine art and television, inviting artists from around the world who, like him, viewed art objects as obsolete and process as all, to participate. Around the same time in the US Chris Burden was performing similiar interventions such as taking a television hostess hostage (TV-Hijack, 1971) and buying TV advertising time, but his work was shown at Documenta 6 whereas Schum was convinced that it should only exist on television. Accordingly, any by-standers witnessing Jan Dibbets drawing his trapezium believing they were experiencing the art work 12 Hours Tide Object with Correction of Perspective (1969), had, from Schum's viewpoint, missed the point completely. The recent exhibition 'Ready To Shoot - Fernsehgalerie Gerry Schum - Videogalerie Schum' at Kunsthalle Dusseldorf, curated by Ulrike Groos and Barbara Hess together with the artist's erstwhile partner, Ursula Wevers, was the first comprehensive retrospective of Schum's work (it is currently on show at Casino Luxembourg and later travels to Porto). Both Fernsehgalerie program-mes, as well as other television experiments, are shown on monitors. Also on display is the series of videos produced by Schum for his Videogalerie in Dusseldorf when he no longer had access to air time on television.

Schum's rigour is evident in the treatments and film projects documented in the show, along with its comprehensive catalogue. Having abandoned the idea of televised reporting on exhibitions, galleries, happenings and artists, he wanted to establish art itself on television. For him this meant showing full-length works unaccompanied by any commentary, even if they were hard to digest. Examples include: Daniel Buren's sign announcing 'Sendestörung' (transmission disrupted), inserted into the broadcast for minutes at a time (Untitled, 1970); footage of Richard Long walking slowly across Dartmoor (Walking a Straight 10 Mile Line Forward and Back Shooting Every Half Mile, 1969); and Joseph Beuys punching a television set with boxing gloves (Filz-TV, Felt TV, 1970). Lawrence Weiner and a branch played with prepositions at the seaside: 'To the Sea - from the Sea - at the Sea' (Untitled, 1970); Barry Flanagan set an open-topped Perspex cylinder in the waves during a rising tide in such a way that, filmed from above, it floated at the centre of the picture as a small circle until it was finally engulfed (A Hole in the Sea, 1969). Minimal art for the millions, Performance art for viewers at home in front of the box.

Schum prefaced these strictly Conceptual works with a televised private view combining elements of the evening news with a gallery opening, including visitors strolling around with wine glasses and an introduction by a museum curator, Jan Leering, from the Stedelijk van Abbemuseum: 'the artists use television and projection to create art works that would be wholly inconceivable without television. Works of art as works of television.' For the second episode the introduction had become much more stern and was given by Schum himself, with a shaved head and sunglasses, sitting behind a desk like a news presenter. He explained the 'disconcertingly positive reviews' of the first episode as the result of 'overvaluation of the impressive landscapes. In some cases this resulted in an unwitting reconciliation with the mostly radical concepts.'

Schum and Wevers set themselves up as hi-tech bohemians in a converted Mercedes van. Powered by generators and packed with state-of-the-art equipment (including an electric barbecue on the roof), this vehicle, fitted out 'in accordance with our physical stature and our workplace requirements', enabled them to shoot on location, anytime, anywhere. Until Schum's suicide in 1973 a series of video works co-produced with artists including Reiner Ruthenbeck, John Baldessari, Richard Serra and Mario Merz was released through Videogalerie Schum. What is most disconcerting is that Schum, in accordance with the worst excesses of male arrogance in the art world, refused to name his partner in the credits, let alone invite a woman artist to work with him. And yet he deserves credit for having had an idea that was as simple as it was original: at a time when museums did not even have televisions, Schum was capturing the actions of the avant-garde on tape.

Presented on low trolleys, the permanently glowing open fire in Jan Dibbets' TV as a Fireplace (1969) or The Nature of Our Looking (1970), by Gilbert & George - showing the cigarette-smoking artists deep in rapt contemplation on the picturesque Sussex coast - give an idea of what art history's television age might have looked like in museum collections when it was made - right down to performance-based copyright instead of one-off payments for objects being sold. Seen together, the video editions from the early 1970s are a vision of a missed opportunity - it took years before institutional collections were ready to really acknowledge the status of video as an artistic medium.