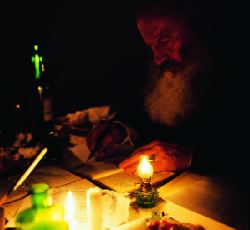 Of the many small white cubes in London's art scene, one in particular managed to make itself heard above Tate Modern's deafening fanfare last year. A makeshift room in Soho's rather sweetly named Fragile House played host to fig-1, a project that, in a relatively short space of time, established itself as something of an institution. Running 50 projects in 50 weeks, curator Mark Francis - who programmed only a few weeks in advance in order to remain as flexible as possible - showcased artists next to architects, writers, designers and musicians. As the project's understated name suggests, its remit was to act as a notional plumb line demonstrating the depth and range of creativity in London at a notionally significant point in time. Its Monday night openings became a regular fixture, with the pub next door doing better business than it did at the weekend.For some, fig-1's path to immediacy and relevance was its metamorphosis from proper name to noun - 'are you going to so-and-so's fig-1?' - or, for the elected cultural beacons 'I've got my fig-1 next week'.

Grammatical curiosities aside, fig-1 was, on the face of things, an exciting project. Yet with claims that it 'emerged as a new model for the presentation of contemporary creativity in the global city that is London', a certain revisionism was perhaps in the air. Supported by White Cube's Jay Jopling and financial consultants Bloomberg, you could hear the grumbles from old-timers that it represented yet another reificatory nail in the coffin of alternative curatorial strategies; its selection simply high-speed and swiftly digested showcases for the big hitter dealers. That may be a knee-jerk reaction, but it's true that memories can be short. Fig-1's claim seems oddly blinkered: since the 1970s Britain has hosted a wealth of alternative spaces and approaches: from, for example, City Racing (now defunct) and Matt's Gallery in London (which ran a series of one-week shows in the 1970s), to Transmission in Glasgow. Then again, the 'alternative' can be as mannered as the 'mainstream'. For many art school graduates in these isles, it's almost de rigueur to pull together, pool funds and follow your degree show with a hit-and-run clarion call to initiative. 'Let's just do the show right here!' as the kids from Fame would have put it. Coco and LeRoy aside, fig-1 may have been shiny but it certainly wasn't new.

Despite being something of a counterpoint to London's relentless barrage of swollen blockbusters, fig-1's swift turnaround of shows was neither a punky shorthand for 'authenticity' nor a two-fingered gesture at some mainstream curatorial shibboleth: its programme was, in fact, balanced enough to make speed an issue rather than the essence. As a testing ground for nascent projects, the programme was by its very nature patchy, but therein lay its strength. Bookended by a year-long work from Richard Hamilton, the pleasure of fig-1 was the feeling that if one week's presentation didn't work, next week something different would come along. Liam Gillick's enjoyably lo-fi Pain in a Building (2000) segued into Georgie Hopton and Josephine Soughan's risibly thin Blip Movie (2000) for example, and Peter Doig's fine equine portrait Pinto (2000) more than made up for Harland Miller's dull At First I Was Afraid (2000). It also generated healthy juxtapositions of established and younger artists - Gilbert and George next to Enrico David, or Philip Treacy's millinery structures followed by Caruso St John's building designs, for example. Heavy on the art front, the projects undertaken by invited architects, designers and writers provided
occasional breathers. The writer Will Self provided a whiff of celebrity when he spent the entire week in the gallery composing a short story based on those who visited. Sat in the centre of the room, his laptop was wired to a wall-mounted monitor, allowing visitors and literary groupies (including a stalker, apparently) to observe his every digression and deletion. The screening of Patti Smith and Robert Mapplethorpe's film Still Moving (1978) was a rare treat - nervous and raw, if a touch dated.

Balancing out the sprinkling of famous names, Matthew Higgs judiciously chose to show two short student films, Driftwood and House and Garage (2000) by Oliver Payne and Nick Relph. Reminiscent of Patrick Keillor's London (1994) or early Peter Greenaway, it was a choice that went some way towards allowing fig-1 to acknowledge audience misgivings about its somehow being a lazy snapshot of existing hierarchies.

Referencing early 1980s' Labour Party posters depicting Karl Marx as Father Christmas, Jeremy Deller's festive contribution involved a kindly Marx character distributing handmade cards to all who visited. Inscribed in each card was a quote from Marx (himself once a resident of Soho) that somehow seemed vaguely apposite and mildly critical of fig-1's time-based formula and illustrative aims. Mine ended with the line 'history is nothing but the activity of Man pursuing his aims'. With a publication designed by Bruce Mau imminent, and possible plans to take the project abroad, fig-1 will probably not be as quickly forgotten as its individual projects were digested. For all its economic biases and curatorial ambiguities, it will be remembered as some kind of demonstration that art is nothing but the activity of Man pursuing his aims.