Going by the Charles Dickens-meets-Revelations title of ‘The Best of Times, the Worst of Times: Rebirth and Apocalypse in Contemporary Art’, almost everything about the inaugural Kyiv Biennale, curated by David Elliott, tended towards the epic, including its failures. Displayed across 24,000 square metres of exhibition space in the vast former military facility of the Mystetskyi Arsenale (a building earmarked by the Ukrainian government as the future site of ‘the world’s largest museum and exhibition complex’), the show brought together 250 works by 100 artists, around 40 percent of which had not been installed by its opening date – the result, apparently, of sluggish government funding, wrangles with contractors and the choice of a venue with minimal electricity provision. Accordingly, on the night of the vernissage, guests were greeted by room after room of bubble-wrapped paintings, boxed-up sculptures and projectors beaming their manufacturer’s logos onto unfinished walls.

At the very least, there was something egalitarian about this shambles, with works by international stars such as Bill Viola, Yael Bartana and Eija-Liisa Ahtila suffering the same ignominious fate as that of young Ukrainian artists such as Vova Vorotniov. (While the hanging of the show was reportedly completed in the days and weeks that followed, Paul McCarthy’s 2006–11 installation The King never made it onto Ukrainian soil.) Somewhat alarmingly, one of the Biennale’s corporate sponsors, Samsung, seemed to have negotiated the chaos at the Arsenale with apparent ease. At the opening, each exhibition space featured a smiling ‘spokes-model’ in a tight white dress, stood beside a freshly painted plinth displaying one of the company’s tablet computers or glowing flat-screen monitors – a sight I imagine was particularly irksome for any Biennale artist still in want of a SCART lead, or a drill.

The blame for this, of course, should not be laid at Elliott’s door, although that isn’t to say that the Biennale’s curatorial thrust was without its own set of problems. In drawing on the opening lines of Dickens’s A Tale of Two Cities (1859), his title unwittingly casts Kyiv as an analogue of either revolutionary Paris or Hanoverian London, neither of which feels appropriate to a post-Soviet capital in the second decade of the 21st century. Equally, his subtitle might have been happily replaced by the words ‘Life and Death’ (or indeed ‘The Whole Span of Human Experience’) so all-embracing was it in its concerns. In the portion of the show on view at the opening, the accent was placed heavily on large (and often very familiar) figurative works by established artists. Among these were Ai Weiwei’s bronze Circle of Animals (2010), a re-interpretation of a series of busts of the creatures that populate the Chinese zodiac made by Jesuit missionaries at the 18th-century Manchu court; Folkert de Jong’s sculpture The Shooting … At Watou; 1st July 2006 (2006), in which a band of Napoleonic soldiers borrowed from Goya taunt a colossus carved from great slabs of pigmented Styrofoam; Jake and Dinos Chapman’s The Dark Destroyer (2011), in which mannequins of zombie SS officers contemplate a crow-pecked abstract sculpture; and Miwa Yanagi’s Windswept Women I and II (2009), a pair of towering photographic prints in which a pair of young giantesses with curiously geriatric boobs stomp and wail in a mountainous wilderness. Whatever the individual merits of these pieces, by the time I reached Raqib Shaw’s woeful painted bronzes of fighting and fucking mythological beasties Narcissus (2009–11), and Makoto Aida’s breathtaking panoramic painting of misty peaks formed from the bodies of thousands of dead office workers Ash Colour Mountains (2009–11), the cumulative effect was of the contents of a fantasy nerd’s bedroom, scaled up to oligarch-pleasing proportions. Booked on a flight leaving the day after the opening, I could only guess that the works still languishing in their crates would have given the show a more varied texture.

Political commentary, of a sort, was provided by Vyacheslav Akhunov’s installation Alley of Super Stars (2008–12), in which the artist remade the granite stars sunk into Hollywood Boulevard, replacing the names of cinematic icons with those of political figures, among them Saddam Hussein, Joseph Stalin and Karl Marx. If this was by some distance the most witless work in the show, perhaps the most intelligent was Annika Eriksson’s The Great Good Place (2010), a modest video of a group of abandoned cats that has formed a community in an Istanbul park. Gathering on a collection of rugs provided by their human neighbours, the cats resemble at once the inhabitants of a refugee camp, protestors at a sit in, hippies at a ‘happening’, and bourgeois picnickers. They are, of course, none of these things. Yawning and purring, yowling and preening, they remain untroubled by the notions of rebirth, or apocalypse. Living always in the moment, they are just about as contemporary as it gets. 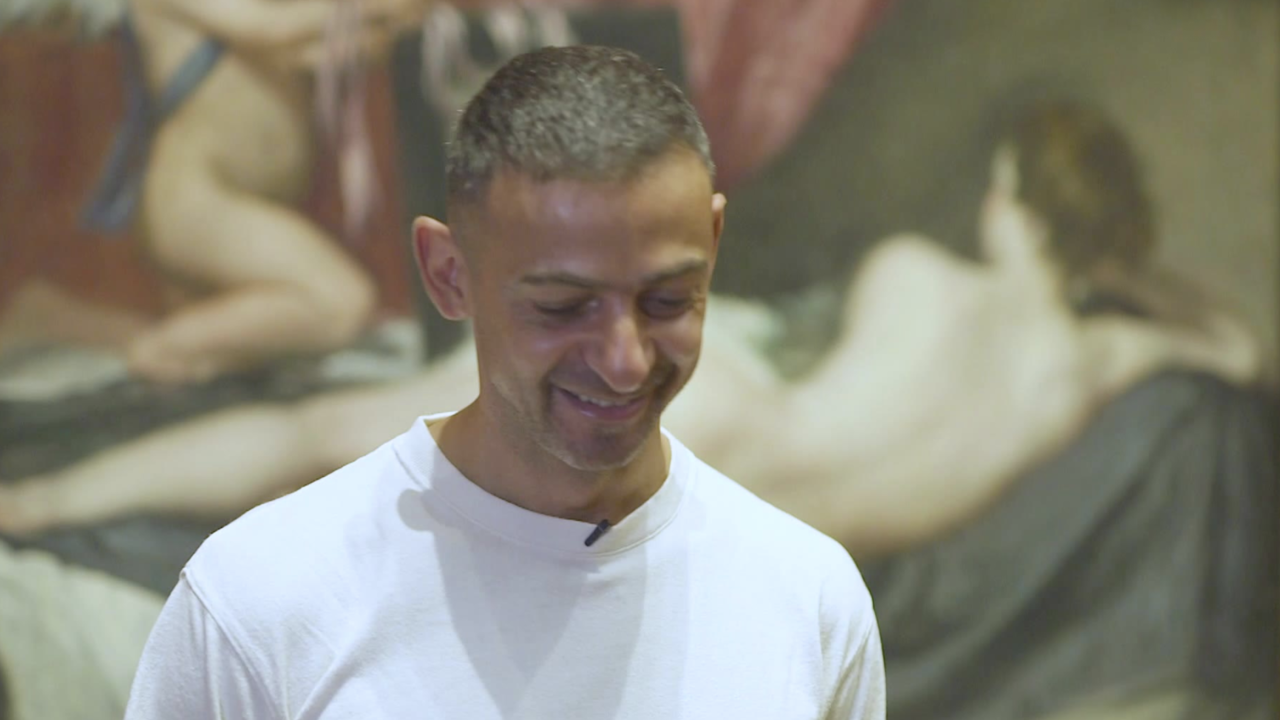 Frieze London
Ali Cherri On the Politics of Visibility