Clear gelatinous liquid oozes over the table’s edge towards the floor, eager to spread itself out into a slimy pool. It never reaches its destination, and is suspended mid-spill. Trapped in the liquid is a floating, glistening image: it appears to depict something metallic, industrial, tool-like, though its precise identity is lost in the rippling slithery surface of the ooze. Elsewhere on this tabletop is a glazed ceramic from which more liquid spills, alongside an auger worm screw, suspended in the same viscous substance. Alisa Baremboym’s sculpture Leakage Industries: Soft Screw (2012) appeals to a sense of touch because it is so many varieties of neither one thing nor another. Faced with such indeterminate materiality, descriptive language turns into a dribbling concatenation of slashes, hyphens and conjunctions. To take an example: the dripping image floating in liquid is created by printing a photograph – a conglomeration of grinder gears and shrink wrap – onto silk and laying it on petroleum gel, which seeps though the fabric and claims it over time, leaving it with qualities that appear both liquid and solid, image and object.

The absorption of one material into another to create a hybrid is repeatedly dramatized in the work of the Russian-born, New York-based artist, and often achieved at a slow and unnerving pace. In a series of works begun around 2012 – in the lead up to ‘A Disagreeable Object’,
a latter-day Surrealism show at SculptureCenter, New York – Baremboym created several works with elements made from unglazed bisque ceramic, so porous and skin-pink that it is often misinterpreted by viewers as silicon. Having noted that the ceramics interacted with emollient gel by sucking it in extremely slowly, she made works that staged this unsettling ingestion. Leakage Industries: Clear Conduit (2012) features a large horizontal gel surface on which four thin ceramic slabs are displayed. These appear both fleshlike and lab-born,organic and synthetic, and they are variously, yet minimally marked: circular patterns of perforations on one element simultaneously recall drains, speakers and the areola around a nipple; tubular joins on another could be a crucial piece of plumbing or a fleshy bone. Such switchy either/ors, chiefly disturbing the boundaries between organic and inorganic, are exacerbated (and also contextualized) by the additional presence of usb cables with gender changers and a flash drive. On their first showing, the ceramics had each absorbed a different amount of liquid; at their last outing, they had darkened to a deep, wet red, as though they were beginning to sweat. 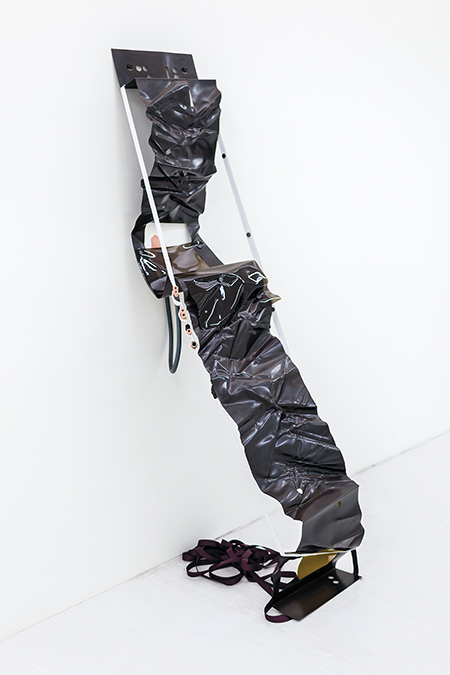 Anyone who has seen a person crouched on the floor, desperate to plug in their mobile device as though they were hoping to top up on a vital elixir, might recognize the dependencies that we have developed in societies of advanced capitalism. Baremboym’s generation (she was born in 1982), has the mixed blessing of having come of age at a moment of technological change, resulting in a fluency with both digital and non-digital technologies. Sculptures emphasizing the body’s sticky liquidity in a technological context provide relief because they are reminders that the human form is not an image, but a tragedy, signalling the flesh’s frailty and collapse.

A more violent industrial aesthetic has emerged in Baremboym’s recent works, such as those shown in the 2014 Taipei Biennial: each one was titled to suggests the channeling of energies into streamlined processes. Amalgams such as Contricity Systems, Fluidiax Systems and Hidralink Systems (all 2014) are informed by Latin roots, suggesting sweat connections (from the Greek root hidr, meaning ‘sweat’, for example) and watery logistics, as well as evoking the blankness of top-level corporations.

Displayed in groups, the sculptures are presented as though each is a crushed modular element in a factory. Sheets of black mangled steel form the backbones of most of these works, as if they had been tortured by production lines that continue to spool out their fucked-up products. Ceramics lie beneath plastic-like meaty viscera; other pinkish elements are preserved in slabs of gel, while still more are fashioned with orifice-like power outlets. Appearing destructively dependent or partially dismembered, one or two are assisted by bungee ropes attached to the ceiling of the exhibition space. They speak of bodies soft and hard, of broken systems that have little alternative but to attempt to patch up problems and continue. In a period of industrial, economic and organic decline, we are dependent on faulty systems – and seemingly intimate with everything.