The House of Tucumán, where Argentinian independence was declared in 1816, is, in the minds of many Argentinians, bright yellow. In reality, the colonial-dwelling-turned-historical-monument is bright white. For London-based Argentinian artist Amalia Pica this breach between a fact and an idea of that fact is a point of fascination. Quite why so many people make this mistake is a mystery – perhaps, Pica suggests, it is because the House of Tucumán is reproduced in yellow in school textbooks. In Hora Catedra (School Period, 2002) Pica indulged the error, bathing the front of the building in yellow floodlights for 40 minutes – the length of a school class.

What we learn in our youth, when our brains are still pliant, is intriguing to Pica, as it is the basis for many of the prejudices and simplifications that inform our adult point of view. In 2004 she left Argentina for the Rijksakademie in Amsterdam. It is one thing to mine the misunderstandings of one’s own culture, but to scratch the surface of another’s, Pica found, tends to perpetuate rather than critique such errors. A major turning point during this period was To Everyone That Waves (2005), a happening and then later a 16mm film installation. For the piece, participants onboard a 19th-century Dutch tall ship waved white handkerchiefs to people on shore, while a camera on the gangway filmed them apparently setting off to sea. In the gallery a pile of handkerchiefs on a plinth in front of the projection seem to dare us to suspend our disbelief and wave back. Here Pica sets in motion an impossible exchange between anachronistic communication technologies, the subtleties of film and the straightforward gesture of waving a handkerchief.

What, asks Pica, makes an image nostalgic? Is it a false memory of a time never even experienced or the patina of patchy historical accounts? Pica repeatedly wonders how we can ever retrieve or even accurately recount an occurrence. The tendency to abbreviate and reach for surrogates or approximations renders precise representation impossible, but the consequent displacement of detail, accuracy and subjectivity is not to be lamented, as it is a symptom of reaching out and sharing information. Misrepresentation is a necessary by-product of civic participation and public space, which Pica celebrates in Untitled (fiesta lights) (2006): a string of multicoloured party lights hanging outside a gallery turn into clear bulbs when the cable passes through the letter box into the space inside. The lights are effectively stripped of their vibrancy as if anticipating their entry into the monochrome of archived history. The flipside occurs in Some of That Colour (2009), where the dye from a string of bunting has dripped onto a sheet of paper, suggesting that, through evocative evidence, the past generates colourful leakage.

Pica has theatricalized public spaces of declaration in two large white structures (Pedestal Transitable, 2008, and From Square to Star, 2010) that look like a cross between a war memorial and a speakers’ platform. They formed the focus of two exhibitions, the solo show ‘Sorry for the Metaphor’ at Artis Den Bosch in the Netherlands in 2008 and for an untitled presentation at the Aichi Triennale 2010 in Nagoya, Japan. The empty platforms invited interaction while scuppering any ‘authentic’ moment of expressive declaration; its overt theatricality suggested that the user, too, would only be performing a self-parody or caricature. The artist then performed this herself in Babble, Blabber, Chatter, Gibber, Jabber, Patter, Prattle, Rattle, Yammer, Yada Yada Yada (2010), a series of slides of Pica wielding semaphore flags in an otherwise empty landscape that spells out its own title – the ultimate vacuous and target-less missive.

This process of transforming an experience into a cipher of itself crops up again and again in Pica’s work, as if she were perversely drawn to the flattening processes of history and communication that art is traditionally supposed to circumvent. The subjective encounter is repeatedly replaced by the worn coin of consensus, but Pica is wary of implying that the real thing has been missed, that the image or object is merely the leavings of this prior moment and that art can never be as good as life.

Making reference to Claude Lévi-Strauss’s Structural Anthropology (1958), in which he considers myths as closed realities and a category of the mind without allegoric reference to specifics elsewhere, Pica describes how the variations between versions of accounts are emblematic of the process of capturing a moment. The permutations, for instance, in the series ‘Unintentional Monument’ (2010) – replicas of homemade antennae – convey the nature of transmission technology as well as ingenuity and technological obsolescence. For her forthcoming installation in the main exhibition at the 54th Venice Biennale, Pica will construct a large Venn diagram projected by coloured theatre lamps, accompanied by a caption that outlines the logical relations of inclusion and exclusion; in the 1970s in Argentina, Venn diagrams were banned from primary school curricula as they were considered to encourage subversive thought. It’s an incredible moment in history, when simplified graphic representation was neurotically re-imagined as a chaotic reality – a reversal of the logical positivism usually performed by the state that evokes the general through the specific, and attempts to construct the ideal through the actual.

Amalia Pica is an Argentinian artist based in London, UK. She is the 2011 recipient of a grant from the Cisneros Fontanals Art Foundation, Miami, and has solo exhibitions at De Inkijk, SKOR, Amsterdam, until 23 June and the University of Michigan Museum of Art until 18 September. Her work is included in the 54th Venice Biennale, ‘ILLUMInazioni’ (ILLUMInations). Her year-long off-site project with the Chisenhale Gallery, London begins on 1 July. In September she will have a solo exhibition at Marc Foxx, Los Angeles. 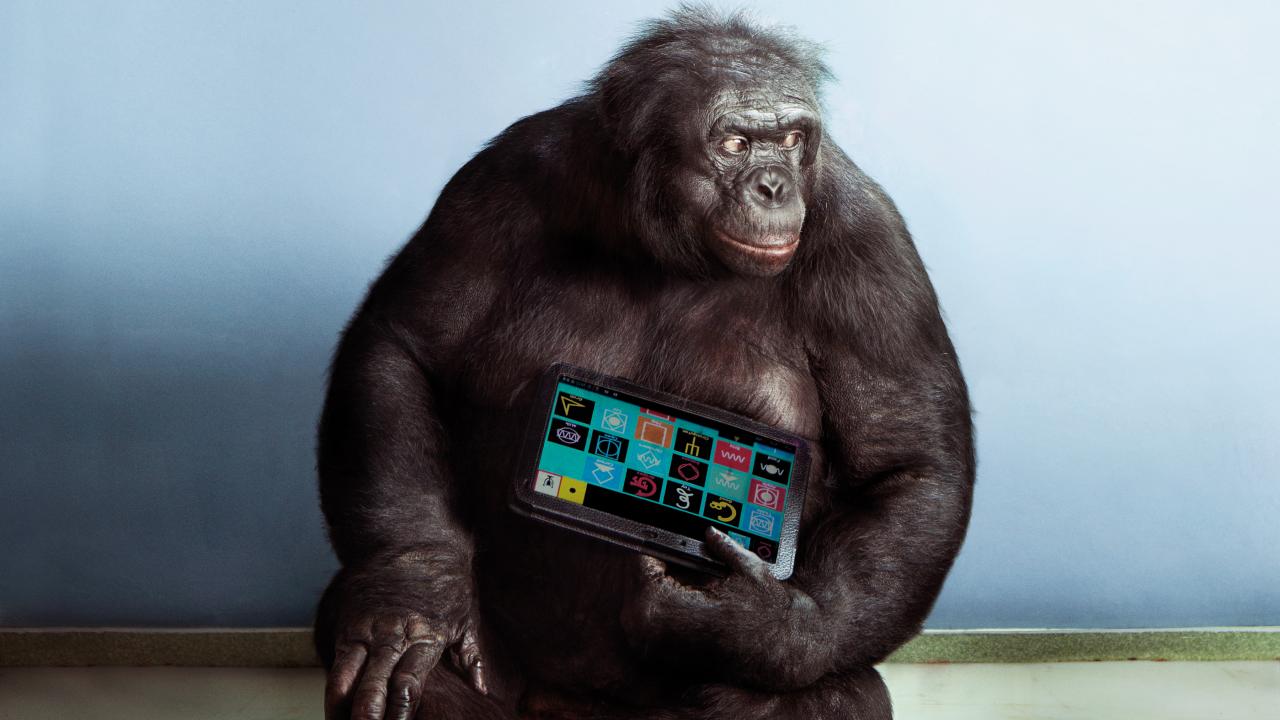 ‘Kanzi is proficient in Yerkish, a keyboard-based language that scientists invented to communicate with great apes’