Forty Posters for the Yale School of Architecture 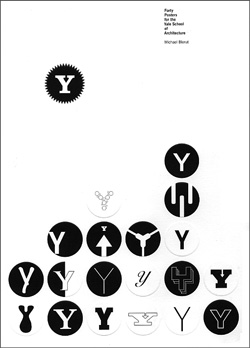 Years ago, in Eye magazine, Michael Bierut recounted to Steven Heller a story about his discovery of graphic design. As a 15-year-old in Ohio he borrowed a book from his high school library called Your Future in Commercial Art and Graphic Design and discovered that his hobby had not just a name but a career attached to it. He then went to his local library and discovered Graphic Design Manual (1965), by Armin Hofmann. He said in the interview with Heller: ‘After repeatedly taking this book out of the library I went to a department store in downtown Cleveland and asked if they had it […] The saleswoman led me to this pile of books, but it was a book called Graphic Design, by Milton Glaser, with Bob Dylan on the front. So there were two books – one by Glaser and one by Hofmann – that seemed diametrically opposed.’ All I can say is, thank God for the Parma, Ohio, Regional Library.
Bierut, Pentagram partner, senior critic at the Yale School of Design and co-founder of the blog Design Observer, began designing posters for Yale’s architecture programme when Robert A. M. Stern took over the academic leadership there in 1998. His collaborators on Design Observer, Jessica Helfand and William Drenttel, principals of the design and publishing firm Winterhouse, have collected the posters into an elegant, understated book.

Educated at the University of Cincinnati’s often-underrated College of Design, Architecture, Art and Planning, Bierut spent the ten years after graduation at Vignelli Associates, where the decorative bits that adorn many of these posters – a masterful hybrid of Swiss discipline and the playful optimism of American design of the era – originated. If the recent collection of the Pentagram Papers (published by Thames & Hudson in the UK and Chronicle Books in the US) highlighted a collective fixation with the overlooked minutiae of inspiration, then these posters represent one designer’s obsession with undermining the predictable limits of form. Despite Pentagram’s design dominance, the work of its partners and employees often goes under-recognized, their names unknown irrespective of the vast scale and vigorous messages behind their work. And while Pentagram’s stock-in-trade may be the coherent identity that corporate clients crave, Bierut’s posters for Yale, at once strikingly sophisticated and sly, feel as though the reins have been slackened. Stern has granted Bierut not only a regular commission that he can be duly credited with, but also the freedom to translate the popular notion of a stalwart brand into something not simply approachable but curious, engaging and engaged. Bierut interjects pixellated photos and word balloons, makes maps out of a season’s lecture circuit and a word-picture puzzle from an open house announcement for prospective students (their first exam?).

As a body of work, the posters here are deeply satisfying, aggressively typographical and each features a unique treatment of the school’s encircled ‘Y’ trademark – a varsity letter, an old New York City subway token, a Rorschach blot. Stark black and white, the posters belie a sophistication, and a comfort with type and the subject matter to hand.

In his introduction Stern upholds Bierut’s work against designers of the past who have been associated with the school, Paul Rand and Norman Ives among them. Yale has no doubt added to the roster of luminaries here.