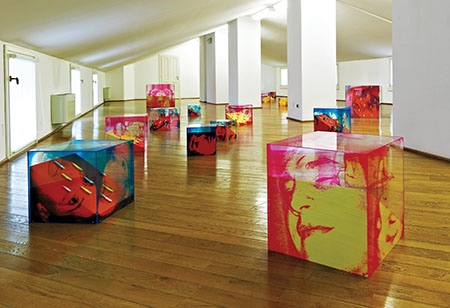 Francesco Candeloro’s practice constitutes a philology of light; it informs the very making of his objects, their origin as well as their effects. Perspex panels are cut using a laser, and photographic emulsions – of cityscapes and physiognomies – are inscribed on surfaces by means of ultraviolet rays. These surfaces, in turn, transform light as it passes through vibrant, translucent panes, whether as free-standing sculptures, window fixtures or carefully crafted cubes pinned to gallery walls or set on its floors.

Candeloro’s pop colours and materials recall the DayGlo flora and fauna of Gino Marotta, but his imagery is as relentlessly urban and architectural as the latter’s is ersatz-organic. Incorporating images and motifs from a range of cities, the objects in this exhibition constitute a miniature architectonics in their own right. Each work comprises two coloured, rectangular planes from a steel base. One panel bears a photographic cityscape, and the other a cut-out of geometric motifs – arches, parallelograms or simple small squares – that frames its pair in striking ways. The excised design derives from the image or site itself, and draws out some aspect of its geometry or general ambiance: twin window frames evoke the structure depicted in Segni del Tempo (Castel del Monte) (Signs of the Time [Castel del Monte], 2010), while the pitched parallelograms of Attraverso i Segni (Londra) (Looking through Signs [London], 2010) evoke the less conspicuous geometry of handrails.

Candeloro’s work also employs the even more fugitive medium of time. The filtering of daylight through transparent panels casts coloured shadows on walls and floors, in slow synch with the almost imperceptible arc of the sun or ambient light. A disembodied kineticism thus issues from solid objects. From the exterior of the Palazzo Panella, the twin cut-out, silhouetted spires of Candeloro’s installation, Luoghi dei Segni (Memorie dei Luoghi) (The Sites of the Signs [Memories of Sites], 2011) – inserted in a single window – announced a subtle transformation of the building’s façade. In the building’s interior, meanwhile, the same Perspex pane cast its doppelgänger across the gallery. Its trajectory over the course of the day was perceptible only by the smallest of degrees. Spectral, coloured doubles skulked across surfaces in unhurried geometries. I could not help but think of the aesthetic proposed a century ago by Candeloro’s more bellical compatriot, Umberto Boccioni, who imagined a Futurist art in which the ‘street enters the house’. Candeloro, too, invites the external world inside structures; his panels refract the city into more metaphysical apparitions. The slowness of his work defies the frenzied simultaneity of Futurism, however.

Even the field of stencilled boxes in another room – each object overlaid with anonymous human likenesses – evoked a silent city in miniature. As a more literalized ‘cubism’, each portrait shifts in the duration of its examination. Candeloro’s paintings play upon some of the same dimensions as his other work, such as the malleable relationship of part to whole. More demonstrably than the transparencies on his Perspex works, the surfaces of Conversation after Sunset (2006) are raised into bumpy relief. Along with the striking geometry of their coloured quadrants, four interconnected panels render a vaguely zoomorphic form striding next to the splayed legs of an acrobatic figure. Each form spills from one panel to the next, interlinking its separated quadrilaterals. In a similar vein, ‘Crossed Directions’ (2007) comprises a series of stenciled works on paper – featuring both drawings and cut-outs – that can either be stacked in a transparent box, or else spread on the wall in various geometric patterns. Again, the apparent simplicity and containment of Candeloro’s pieces entail a condensed exponentiality, belied by their more humble appearance.

Though not a full retrospective, this show went some way in representing the range and depth of one of Italy’s most promising, incisive young artists. Close attention to the nuances of Candeloro’s work repays the patience with which its forms have been wrought and incised. Patience, here, is its own reward – inbuilt to objects, emanating in a radiance at once humble and charismatic.